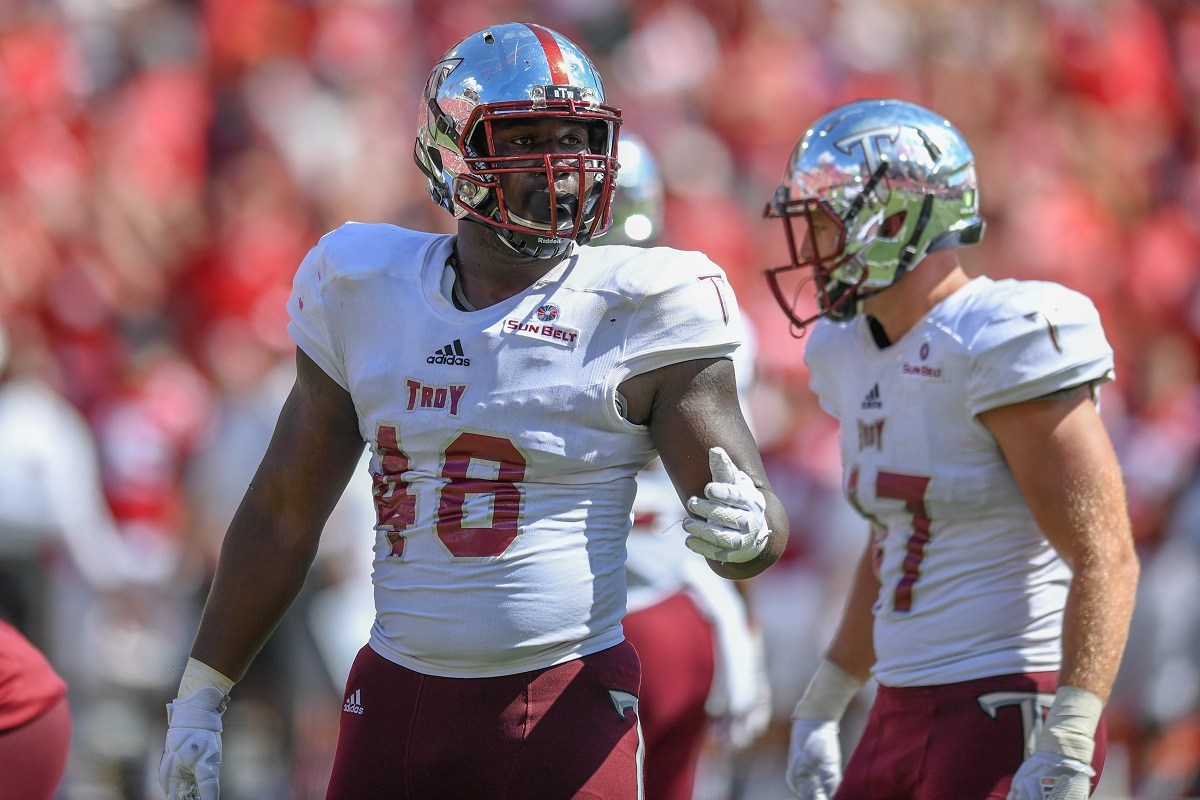 The Trojans are favored by 3.5 points in this Sun Belt Conference matchup and we have a 47.5 showing on the total.

The Trojans are actually in the thick of things being only 1 game behind the 3-way tie atop the East Division standings. App State, Coastal Carolina, and Georgia State are 3 – 1 with the 2 – 2 Trojans hanging behind the group coming in this weekend.

Unfortunately, the Chanticleers just took down this Trojan team last time out and this final 4-game stretch of the regular season will surely test the Troy mettle. Troy will take on both App State and Georgia State to finish the season so plenty can still happen as we play out the rest of the regular season.

The Jaguars are 2 – 3 in Sun Belt play but 5 – 0 Louisiana has a grasp on the conference title game spot thus far. South Alabama can, at least, ensure a 6th win to claim their bowl eligibility this weekend in Kane Wommack’s 1st season in Mobile, AL.

The Jags have not seen the post-season since 2016 and they have only been to two bowl games in their history. The other showing came just two years before in 2014 so it has been a while.

The Jags had lost 3 of their last 4 games before finding a win over Arkansas State last weekend, 31 – 13. South Alabama has only been an underdog once this entire season, and they easily covered that 12-point spread against Louisiana losing by 2, 20 – 18.

I expect to see the Jags as dogs the rest of the way and it starts here on the road against a Troy program that gave Coastal a run for their money coming off their bye week last time out.

South Alabama transfer QB Jake Bentley came to the rescue again for the Jags throwing 4 TD passes in what was really a comfortable win. Bentley completed a 13-yard pass to Jalen Tolbert to get the festivities started and it was the beginning of what became a 28 – 0 lead before a response was made by the Wolves.

Bentley ended the game 29 of 39 with 248 yards with a pick against him but he looked pretty locked in in the first half. The second half? Well, no one knows what happened because the Jags only kicked one field goal in the entire second half. Layne Hatcher was picked off 3 times by the Jags defense and Te’Vailance Hunt fumbled away a possession

As a unit, the Jags put up 173 rushing yards led by Terrion Avery who busted out for 113 yards from 22 totes. This team needed to start getting their run game together as it has been rather ugly throughout the season. The Jags rushing offense ranks 93rd putting up just under 135 YPG and Bentley is certainly not a dude who will tuck a ball in and run for much.

The USA defense has been a strong point of the campaign as you see this team ranked in the top-35 of pretty much every major category. The Jags rank 20th in the nation in total yards allowed and 24th against the opponents’ run game giving up just under 119 YPG.

Jake Bentley just went over the 2,000-yard passing mark last weekend but he also has Jalen Tolbert who will go over 1,000 yards this weekend. Tolbert has amassed 967 yards more than doubling his closest teammate Jalen Wayne’s output of 385 yards on the year. Wayne has added a pair of TD scores while Tolbert has found his way to the end zone 6 times in 2021.

Trojans Head Coach Chip Lindsey has yet to get his program to the post-season in this being his third year with the program. Troy was in a bowl game under Neal Brown in all 3 of his final seasons before Lindsey took over in 2019.

Even though the Trojans are favored to win this game, they certainly know that an experienced QB is on the other side of the field with Bentley running the show.

Taylor Powell hasn’t been seen on the field since the loss to South Carolina on October 2, 23 – 14, and that has left Gunnar Watson in charge. If not turning over the ball is a good thing, and we all damn well know it is, then Watson has his job secured for sure. When you see a 0 under any QBs INT box we have to take note even if it is a conservative approach.

Watson threw for 3 scores against Coastal in the loss and he went 17 for 30 on the day with 225 passing yards. Tez Johnson led the way with 4 grabs for 88 yards and accounted for one of those TD passes while Watson completed balls to 9 different receivers.

The Troy defense held Grayson McCall to only 14 completions on the night, but it seemed like every pass that was caught was for something significant. Coastal ended the game with 294 passing yards from those 14 grabs averaging 21 yards a pop.

You’re telling me we need 48 points to cash our tickets on this total to sneak in Over the number?

In addition, every trend we can find will be pointing people to the under so don’t get stuck thinking old trends will impact this weekend’s game. It won’t!

If you’re looking for more picks like this South Alabama Jaguars vs. Troy Trojans matchup we’ll be providing 4* free College football game predictions on the blog all season long, and check out our Experts for guaranteed premium & free CFB Football picks!