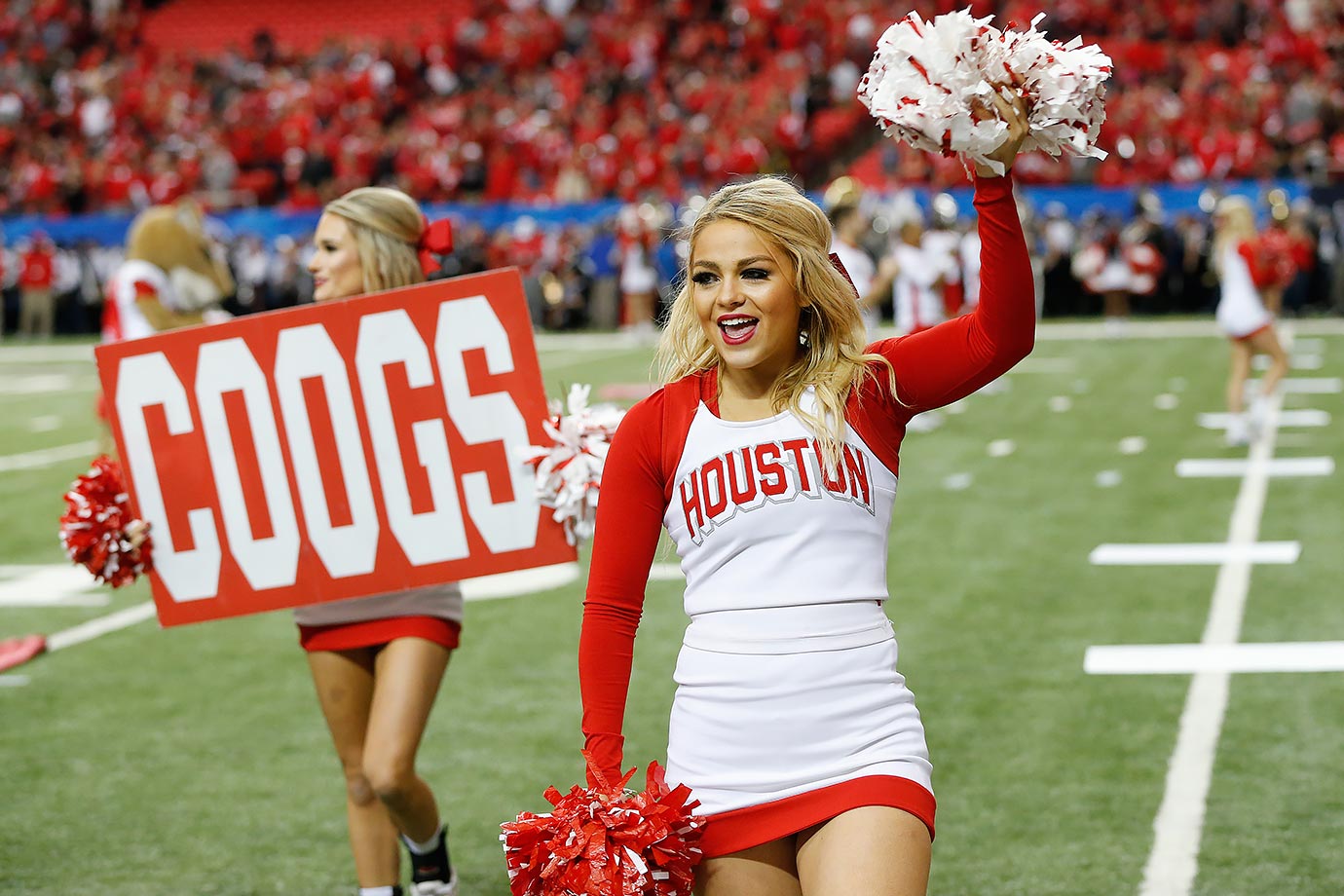 We have a pick ’em situation for this American Athletic Conference matchup between SMU and Houston with a 62.5 showing on the total.

The 18th ranked SMU Mustangs will be on the road for 3 of their last 5 games which starts with this trip down to Houston this weekend. These In-State rivals have met 36 times since 1975  and the Cougars hold a 22 – 13 – 1 edge in the series. These two have even played a bowl game in Japan against each other back in 1983 and it wasn’t a Mirage! I know, I know, I’ll be here all season!

As do the Mustangs, the Cougars have also won enough games to become bowl eligible even with that big, impressive win over Grambling, baby! Yeah, that FCS crap needs to be abolished right soon because it’s just a glorified scrimmage that somehow counts in the standings.

Anyway, the Cougars ride a 6-game winning streak into this party after losing their season opener to Texas Tech. The defense has taken a step in the right direction but they’ll be going up against one of the best offenses in the nation this weekend.

Something’s gotta give so let’s see what we can expect to happen in this game that will leave one team with their first conference loss of 2021.

SMU has won all 3 of their conference games and the other 4 non-non-conference affairs as Sonny Dykes has his team undefeated driving down Houston. Driving down is the right word to use because the Mustangs have been driving the ball down everyone’s throat in 2021. Sonny’s name has come up this week in regards to the Texas Tech head coaching job that became vacant on Monday.

So far, Dykes is still here so the quest to go undefeated remains the goal now that a bowl bid is already in their pockets. Surely, the bowl bid is a nice goal to reach but when you hit 7 – 0 different goals start to pop up. The Conference Championship Game becomes one of those quests and a 12 – 0 campaign would obviously raise the questions about an AAC program being in a position to win something bigger. You know, the playoff and such?

SMU ranks 5th in the nation putting up 527.1 total yards a game and the 42.7 PPG puts this program at 6th in the land in scoring. Ulysses Bentley IV is expected to go this weekend as there was a concern the Stangs second-leading rusher might be sitting this one out.

Luckily, Tre Siggers is capable of moving the ball as he has titled the rock 101 times gaining 473 yards while making 4 trips to the end zone.

Tanner Mordecai will be seen tossing the pill and tucking in that thing too as he averages nearly 5 yards a pop running the ball on top of what he does under center. Mordecai has thrown the rock for 2,320 yards and has thrown 29 TD passes while only being sacked twice all season <<< He said TWICE all season!

Mordecai has completed passes to 15 different receivers in 2021 but his big 4 targets really do most of the damage. Danny Gray, Rashee Rice, and Reggie Roberson have each made over 30 catches, and tight end Grant Calcaterra can always be seen near the goal line in the pattern.

The Cougars played their homecoming game against ECU this past weekend and it took overtime to escape with a win over the Pirates, 31 – 24. The game started much later than the original time set and the weather was a factor in the outcome although it lessened up as the game went on.

Houston scored their TD in OT on a fantastic run from Alton McCaskill who took the ball 25-yards right off the top. the offensive line basically carried him down the left side of the field and he pinballed his way to paydirt. The Houston defense caused a fumble on the 2nd play of the ECU drive and it was time to drive home safely with a Cougar home win on homecoming.

McCaskill had only gained 35 yards on the ground all day before the 25-yard scoot to the end zone.

On the other side of the ledger, Houston was up 24 – 10 at the half so when you go to OT tied at 24 – 24 that tells you how the second-half transpired. Houston simply couldn’t move the ball a lick in a weather game that slowed down both offenses most of the night.

Clayton Tune did an admiral job throwing the ball 29 times completing 19 of them for 278 and a pair of TD strikes. The Houston defense caused 5 fumbles, however,

This Cougar defense ranks 4th in all of college football only allowing 278.9 YPG and you can see Houston in the top-20 of basically every category that matters.

We see no concerns this weekend for weather in Houston as the forecast for Saturday is 75 degrees F and sunny. That will clean up some of the issues we saw effect last weekend’s game here at TDECU Stadium.

With that said, I like this game to fly over this high number of 62.5 because it should be more like 67. I foresee a 41 – 38 game and plenty of points to come for us to cash those Over tickets so do it to it! I like SMU to come away with the victory to move to 8 – 0 as well so play it accordingly.

If you’re looking for more picks like this SMU Mustangs vs. Houston Cougars matchup we’ll be providing 4* free College football game predictions on the blog all season long, and check out our Experts for guaranteed premium & free CFB Football picks!