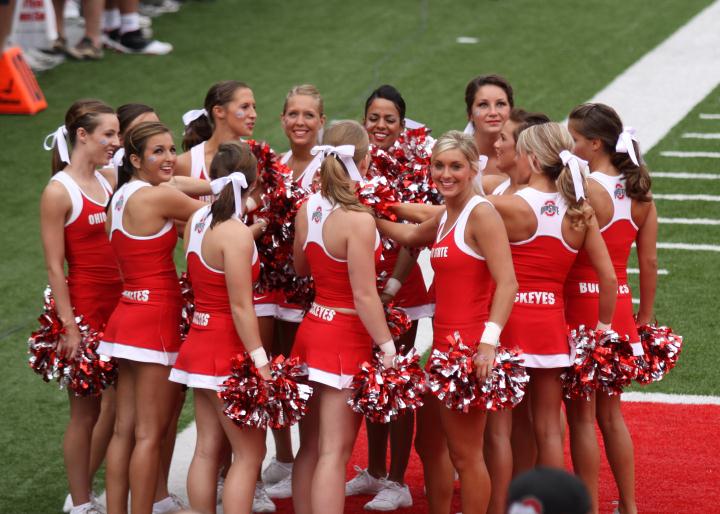 The Buckeyes are favored by 18.5 points in this Big Ten Conference matchup and we have a 61 showing on the total.

While there is one Big Ten clash this weekend featuring two top-10 programs (Mich vs. Mich State at noon ET) there is this top-25 matchup at Ohio Stadium at night that is must-see TV.

Michigan, Michigan State, and Ohio State are all 4 – 0 in Big Ten play entering the weekend and all of that will be changing by the end of Saturday night. Penn State comes into Ohio Stadium as nearly 3 TD underdogs

This is not a historic rivalry in the Big Ten as these two programs have only met 35 times with Ohio State holding a 21 – 14 edge in the series. These two did first meet in 1912, however, but they only played a handful of games before they became conference opponents in 1993 when Penn State came to the Big Ten.

After a 5 – 0 start to the season, the Nittany Lions are now looking to erase a 2-game losing skid losing both games by a combined 5 points to Iowa and Illinois.

Ohio State’s Ryan Day picked up his first regular-season loss in 4 years in Columbus early in the season against Oregon but they have reeled off 5 straight wins coming into this weekend.

It’s not how you start it’s how you finish! We all know that the non-conference schedules are just little pieces to a bigger pie that comes with Conference games that hold all the weight. Penn State could just as easily be 6 – 1 like Ohio State or even 7 – 0 with the two Michigan outfits had one possession changed the outcomes of the last two losses.

The Lions only played a 9 overtime game last weekend against the Illini and the new rules still seem rather strange in how to decide a winner. All of these two-point conversion attempts count as an entire overtime period so it’s not like they played 9 actual overtimes. My point of that is to not get lost thinking they were so overwhelmed by playing so much football last time out because each overtime is actually just one play now.

So, a loss is a loss and Penn State surely didn’t want to be on the downslide coming into Columbus this weekend.

You could literally hear a pin drop when Brandon Peters hit Casey Washington in the back of the end zone of the 9th overtime period that gave Illinois the 20 – 18 win in Happy Valley. It is amazing to think that the Penn State defense only allowed 38 passing yards to the Illini and then you see the rush yards and it’s like, ok who tackled anyone and how was this a close game at all?

Illinois ran for 357 yards on the Lions and it’s not like Penn State is some terrible team who always gets torched like that. The Penn State defense ranks 23rd in total yards allowed and is now back at 58 against the run after last weekend’s results. This team was coming off their bye as well so you would think they would be better prepared.

The Illini picked up  26 first downs and were 9 of 18 on converting 3rd downs against Penn State, and the second half of the game the Lions were shut out! No points after a 10 – 7 halftime came down to a 10 — 10 game headed to OT.

The Buckeyes have taken 8 of the last 9 meetings against Penn State and Ryan Day is 3 – 0 in his 3 cracks at the Lions since taking over in Columbus.

Let’s not forget that 24 lettermen left this program after the 2020 campaign and only 11 total starters returned from the 7 – 1 team that wiped out Clemson before succumbing to Alabama in the title game.

The first two games of 2021 sure had everyone concerned about the defense as the Buckeyes gave up 31 points to Minnesota to open the year and then lost 35 – 28 to Oregon. At 1 – 1, the defensive side of the ball really started to step up and you can see the progress in the last 5 results.

Ohio State has outscored their last 5 opponents 272 – 64 and are coming off their impressive 54 – 7 win over Indiana that followed up their bye week. Ohio State held the Hoosiers to only 128 total yards while putting up 539 of their own yards while only being pushed to 3rd down 9 times the entire day.

Oh, they converted 6 of the 9 3rd down attempts although the time of possession was just about even. C.J Stroud had the Buckeyes up 44 – 7 by halftime and threw 4TD passes accumulating 266 passing yards in the win. Stroud hit 11 different receivers while Jeremy Ruckert was found twice in the end zone from his 5 grabs on the day.

The concern with the Penn State running game is a valid one because they simply can’t run the ball. That will not change this weekend no matter how hard they prepare because Ohio State will be ready for all of that. This line is stupid-high and it surely concerns me having thinkdog in this spot too.

I can’t let that many points sit on the board though so let’s call for 34 – 20 and see where the chips fall.

If you’re looking for more picks like this Penn State Nittany Lions vs. Ohio State Buckeyes matchup we’ll be providing 4* free College football game predictions on the blog all season long, and check out our Experts for guaranteed premium & free CFB Football picks!