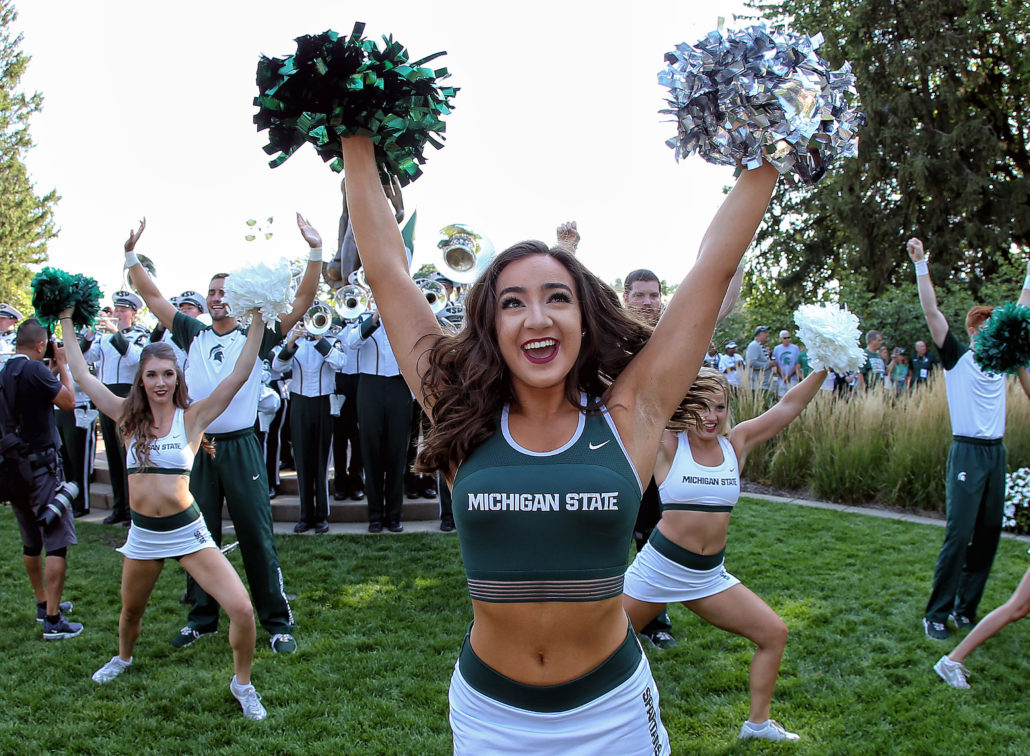 The Wolverines are favored by 4  points in this Big Ten Conference matchup and we have a 50.5 showing on the total.

So, raise your hand if you had Michigan and Michigan State meeting in October with both programs at 7 – 0 coming into East Lansing?! Supposedly, this was a rebuilding year for Sparty who was following up a dismal 2 – 5 2020 campaign. Head Coach Mel Tucker has apparently pushed up the time frame for success and 7 – 0 tells the story about how things are going thus far in 2021.

And of course, what would make this game better if both teams were undefeated coming into this weekend? Not much other than the winner will hold on to Paul Bunyan’s Trophy for a calendar year.

The last time these two met Michigan was heavy favorites at home and they were playing on Halloween for the time in the storied history of this rivalry. Coach Tucker became the first man since Nick Saban in 1995 to win his first meeting with Michigan.

While the expectations will always be high in Ann Arbor, let’s not forget that this team was 2 – 4 in 2020 and had a lot of room for improvement. Everyone wants to call for Harbaugh’s head anytime things get a little tough because of how unrealistic those expectations can actually be. Winning in the Big Ten is no easy task and 7 – 0 is a major accomplishment and there are no FCS cupcakes on the Wolverine schedule either.

I am no fan of theirs, but it is amazing how people consider Michigan as having disappointing seasons recently. Yeah ok, shucks, they got stuck with only 9 wins or 10 wins the last two years so we should all feel so bad for those struggling times LOL.

Who is your team or alma mater? Have they won no less than 8 games until the 2020 debacle that affected a ton of big programs? Cry me a river!
So, now that the 7 – 0 Wolverines are the thing to talk about no one is asking for Big Jim’s resignation right now.

The Wolverine’s had their bye week before dismantling Northwestern last weekend, 33 – 7, which might not impress too many pundits out there. The Wildcats are certainly having a down season so that win was an easy expectation to fill for Michigan.

This game is on the mind of everyone in this program before the season even starts and we all know it. The meeting with Ohio State is certainly the most talked-about game of the year on Fox and ESPN, but this program has this game circled right next to the Buckeyes, make no mistake about it.

Now we have a top-10 showdown on Fox at high noon to raise the stakes even more with it being a nationally televised game that plenty of scouts will have their eyes on.

Cade McNamara isn’t going to put up 300 yards a game and he certainly will not be seen running up and down the field either. He just simply knows how to motivate the guys around him and he has a pair of backs that can provide plenty of punch.

Blake Corum is outstanding and can do everything OC Josh Gattis needs him to do to move the chains. Corum is leading the team with 729 rushing yards from 116 carries but he has added 18 passes caught for another 125 yards with a trip to the end zone to his credit.

Mel Tucker got his coaching career started as a graduated assistant right here in East Lansing way back in 1997. His return as a head coach got off to an auspicious start going 2 – 5 last season with no one expecting them to be in a dog fight for the Big Ten East Division title.

Well, here they are and you may think their mindset could be that we have nothing to lose now, but you must not be in this locker room. Being home dogs in a game that pits two evenly matched teams will certainly have this home crowd fired up and it’s one of the oldest rivalries in college football too?

Sparty has also had two weeks to prepare for this meeting with the bye week coming at a convenient time. This year’s defense has held their own not allowing more than 21 points to any team other than… Western Kentucky, who found 31 against them back on October 2nds homecoming affair.

Let’s also keep in mind it was 45 – 16 before the backups came in and allowed a boatload of 4th quarter points making the score look a little closer than the game actually was.

The rankings show otherwise, however, as you see Sparty is listed at 121st out of 130 teams defending the pass. Allowing 286 passing yards per game this defense also gives up 406.1 total yards an outing which puts them way back at 87th in the nation.

This offense is seemingly running itself under Payton Thome and the ground game is in great shape in the hands of Kenny Walker III. Walker will go over 1,000 yards this weekend with only 3 yards and his 9 TD scoots with one in the passing game look pretty damn good.

Thome has a pair of wideouts with over 500 yards to their credit to help account for his 1,701 yards and 15 TD passes Jayden Reed and Jalen Nailor have each brought in 27 balls and are over 1,000 combined yards with 11 of Thome’s 15 scores.

I could write 2,000 words about how important this game is and talk about the rankings and stats and blah F**king blah! Who will win and what’s the play Ej? All right, I like your style, so here is what you need to do. Michigan State is the play at home to cover the 4 points and it will come down to the final play of the game. Michigan escapes with the win, but this ends up being a 1-point game.

If you’re looking for more picks like this Michigan Wolverines vs. Michigan State Spartans matchup we’ll be providing 4* free College football game predictions on the blog all season long, and check out our Experts for guaranteed premium & free CFB Football picks!