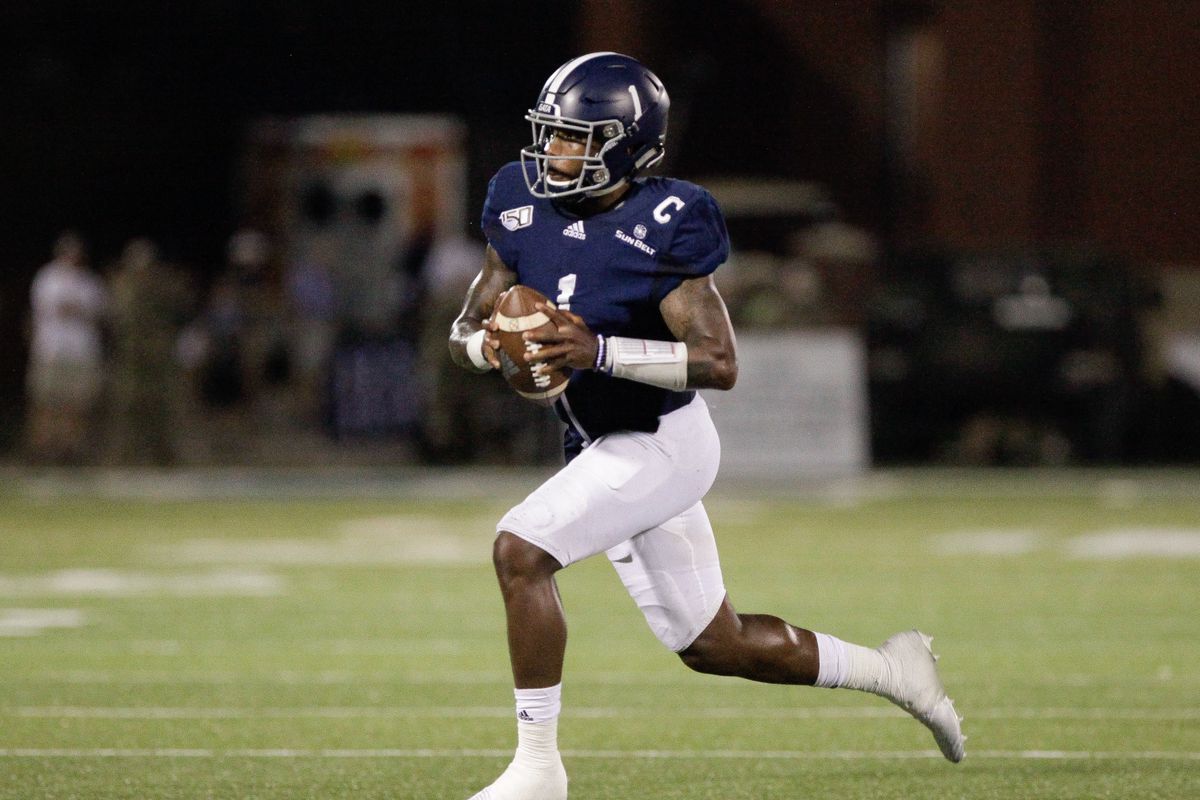 The Panthers are favored by 6 points in this Sun Belt Conference matchup that is also an East Division game that features a 55 showing on the total.

So, we basically get our choice of games for the most part and no one seemed to want to take this one on? Oh, put me in, Coach! Can I just point you to the Over 55 now so you don’t have to scroll to the bottom of the page?

I grabbed this game because of that total being so low and then I saw it start to creep up a little and wanted to make sure we had this preview up for Saturday.

Points, people! Expect points to come when these two come together for this divisional contest. Naturally, the Panthers should be favored in this spot being that they are the better team and they have a semblance of how to play defense. Don’t use that word in the same sentence with the Eagles, however, especially against the pass.

The Panthers might not be able to take advantage of the 130th ranked pass defense in front of them this weekend, but they still should have plenty of success moving the ball. Finishing drives will be the only concern we will have but the rushing attack should be fired up!

The Panthers are ranked 16th in the nation running the ball putting up 222.1 yards a game and it came in handy last weekend against Texas State. Georgia State put up 283 rushing yards and Jamyest Williams found himself in the end zone twice from only 8 carries in the game. Not a bad TD to carry ratio, ya think?!

Tucker Gregg gained 115 yards on 21 carries and Darren Grainger added nearly 100 more with his legs while throwing for a pair of scores as well. Grainger ended the day with only 200 passing yards going 16 for 25 but when you can combine what he does as a dual-threat guy he is fun to watch.

The stats aren’t going to knock anyone’s socks off but the dude can do some things that plenty of other QBs just can’t do. He is second on this team in rushing yards although he only trails Gregg by 10 carries (80 – 70 resp). He does need to develop the offense into a more balanced attack which is likely why everyone gears up for the run when they take on the Panthers.

They should have some success being that the Eagles give up plenty of yards even with the extra week to prepare for this week’s game.

The bye week certainly can’t hurt this team because there are plenty of issues on that ‘Other’ side of the ball. I told you not to use the words def… that, and the Eagles in the same sentence because we have the 130th ranked pass defense on this field. When you have 130 FBS programs and you are simply the worst in the nation AT ANYTHING? Well, that’s none of our faults and we just have to watch it continue to cash this total on Saturday.

The Eagles simply haven’t slowed down anyone as they surrender 494.4 yards a game which puts them all the back at 127th in the rankings. If giving up 34 points per contest doesn’t spell out even more of the problems then maybe you should take up backgammon!

The Eagles have a damn good chance to go winless down the stretch with what’s in front of them to end the regular season. I expect them to be underdogs even against Texas State as bad as they are playing in 2021.

This game may be a homecoming affair and a bigger, more excitable crowd will lift the team a little to give the offense a boost. However, nothing will help them against Coastal Carolina, Appalachian State, and BYU to close out the year.

Let’s keep in mind that Gardner-Webb and Arkansas State account for those 2 wins you see on the Eagles record. Those are not exactly programs that have a chance to compete with FBS opponents.

Justin Tomlin? Yeah, not so good with those 5 INTs to go along with all of those TD passes… wait, he doesn’t have any TD passes, never mind! In fact, he has never thrown a single TD pass in his entire career so I get your concerns about this total in that regard.

There isn’t even but one WR in the top-6 of the depth chart in caught balls for this team, and there are only 3 players with double-digit balls caught. Tight End Khaleb Hood leads this team with 16 balls because he is usually close enough to the line of scrimmage for him to see the ball.

Let’s just say that you will probably not see one pass thrown for more than 10 yards all day so expect the damage to come in the ground game.

The Eagles will do enough to come up 17 points but they are about to get dismantled by the Panthers.

This is a 45 – 17 game waiting to happen and you have two ways to play it. We might only see about 150 passing yards all day and no one is concerned about it. Play it like this …

If you’re looking for more picks like this Georgia State Panthers vs. Georgia Southern Eagles matchup we’ll be providing 4* free College football game predictions on the blog all season long, and check out our Experts for guaranteed premium & free CFB Football picks!