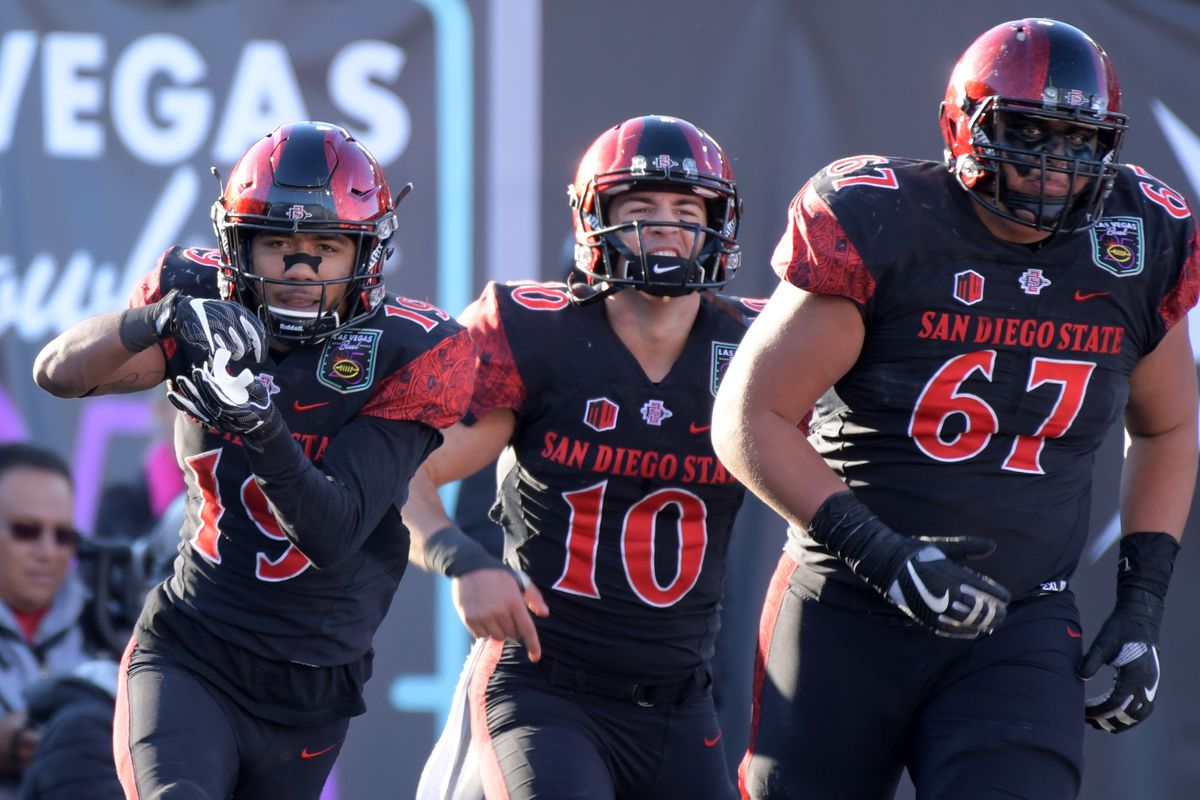 The Aztecs are favored by a single point in this Mountain West Conference matchup and the total has come down to 44.5 over the course of the week.

The home line on the Aztecs hasn’t moved but this total went from 46 to 44.5 trying to point folks to a low-scoring game. I think we understand that being that Fresno State has already shut out two of their opponents this season. On top of that, The Bulldogs pulled off a big win last weekend over Nevada who was the favorite to take the West Division MW title this year.

San Diego State has no blemishes on their record and that is why they are favored at home albeit by a single point. Speaking of defense, let’s make sure we point out that the Aztecs are in the top-10 against the run, total yards allowed, and scoring.

Might this be a 3 – 0 game with one score deciding who comes away with this win? These two teams barely scraped out 24 points the last time they met here in 2019 but they didn’t get to play last year’s game due to all of the cancelations that took place in 2020. The Bulldogs were only able to get 6 games played a year ago and were left at 3 – 3 when the smoke cleared.

Let’s not hide the fact that head coach Kalen DeBoer has yet to play the Aztecs but he can see what is in front of him. the San Diego State defense is pretty good on paper but then you look at their schedule and he should not be intimidated a bit.

Should Jack Haener and his offense have a decent day, this corps of receivers can go over 3,000 yards combined with 14 different dudes already with grabs in 2021. The Bulldogs average 341 passing yards a game and rank 9th in the country as a result. Fresno puts up 35.6 PPG and that puts them at 22nd in the land but the running game could use some improvement.

The Rankings show the disparity in the numbers as the Bulldogs only put up 139 yards on the ground per outing. That number puts them back in the 87th position but I think they’ll take the good with the bad.

Haener has a 22 to 6 TD to INT ratio and he has added a trio of scores on the ground to boot. I don’t think anyone would consider him any kind of a dual-threat guy, however, as they do not run plays for him to carry the ball he just can escape the pocket well enough to avoid disaster and not lose big yards.

If you missed the Nevada game, ahh man, go back and find a way to watch it because it really was an awesome affair. Even though the Bulldogs held the lead for most of the game, they both knew it was a game for the lead in the division and it came down to the last play of the game. Fresno stopped Nevada from converting the 2-point conversion that would have sent the game to OT with only 2 seconds left to play.

Haener was 26 of 38 with 256 yards along with a pair of scores but his counterpart really put up some numbers. Nevada’s Carson Strong threw the ball 61 times and amassed 476 yards with 4 TD passes of his own.

The Bulldogs will certainly throw all they can at this untested Aztec defense and the line setters know this will not be an easy home win.

The Aztecs’ schedule is filled with so much garbage that the town called and needs them to spray some deodorant to lessen the stink around campus! New Mexico, New Mexico State, Towson, and San Jose State have no idea what they are doing this season and I could ask 10 of my friends to go out and help me score 42 points on them.

Hmm hmm, it’s like that and I simply do not believe that Fresno State will struggle a damn bit scoring on the Aztecs. Let’s also make note of how bad the Aztecs offense has been but yet still finds ways to win games… All of them, in fact!

All right, that Utah win I will chalk up as a nice performance against a quality opponent but otherwise it is tough to find anything to write home about.

We know there are 130 FBS programs and the Aztecs rank 125th in the country passing the ball. Lucas Johnson only the ball 13 times but he did complete 11 of them for a whopping 77 yards. The Bell brothers did all right but this team still only put 157 rushing yards last week as a unit.

It’s time for a kicker comment! Did you see the Air Force game last weekend? My goodness Matt Araiza, can you kick a damn ball or what, son?! The 81-yard punt early in the game changed the entire complexion of the game and he didn’t even get a good roll.

Standing from his end zone the ball landed and rolled sideways and he still got it 81 f**king yards, man! I am sorry, but that boot was awesome. I know, we’re talking bout kickers? Kickers? Come on, man, he kicked a 51-yard FG in the game too he deserves some pub!

Fresno State is going to take the Aztecs’ swords and stick them where the sun doesn’t shine, baby!

If you’re looking for more picks like this Fresno State Bulldogs vs. San Diego State Aztecs matchup we’ll be providing 4* free College football game predictions on the blog all season long, and check out our Experts for guaranteed premium & free CFB Football picks!