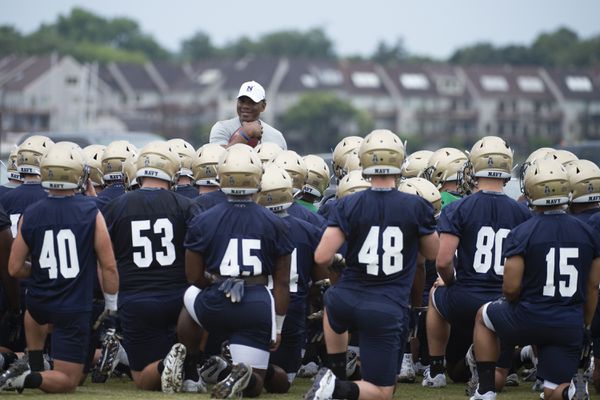 The Pirates are favored by 4 points in this AAC matchup and the line setters have issued a low 46.5 on the total.

The Pirates have technically put themselves in a position to accept a bowl bid with 6 wins in 2021. You can see all of the articles out there saying as much but let’s not just make that a foregone conclusion that the post-season appearance is coming.

Should ECU lose this game to the Naval Academy the Cincinnati Bearcats are on deck for this program next weekend. Now, that could potentially leave this program at 6 – 6, and that win over Charleston Southern will start to lead to some questions asking just how worthy this program really is?

Hey, if someone calls over the next couple of days with a bowl offer they will likely say yes to any takers affiliated with the American Athletic Conference right away.

Oh, and Navy is playing this game too, LoL

What a game that was between the Pirates and Memphis last weekend that earned this program their bowl eligibility. ECU goes ahead in OT and we all thought the second overtime was coming when Memphis scored in response to the Pirates TD.

Coach Houston figured he would try to take a sneaky timeout to ice the Memphis kicker and get him thinking. So, Memphis decided to try to tell the coach to stick his decision where the sun doesn’t shine and go for two instead! The Pirates defense came up big and knocked down the pass attempt that clinched the 6th win of the season for ECU last weekend.

So, as I mentioned about this Charleston Southern win on the schedule impresses no one and I talk about how a mid-major scheduling an FCS program is really just detrimental for this moment right here. The amount of money that ECU made for hosting Charleston Southern will not bring in more than an ESPN bowl game on National TV during the holidays in the United States.

You want to be that program in December playing football and not the one that beat an FCS outfit in August or early September.

The Pirates are toting a 3-game win streak into this affair with the Academy and Holton Ahlers is doing a damn good job at keeping this team in the fight week after week. In case you hadn’t noticed, this team came within a drive of beating Houston, within 4 points of beating UCF, and they only lost to South Carolina by a field goal too.

It’s not like this team really isn’t deserving of that bowl bid so I expect they will still be getting that call as long as Ahlers is standing on two legs. The dude is fun to watch and he will go over the 2,500-yard mark this weekend with only 17 passing yards.

The one big concern we have seen here is that Ahlers gets dumped in the backfield way too often. When your starting QB has been sacked 32 times? Yeah, Nuff said.

Things are just not going well for the Academy recently, and this year marks the 3rd in 4 years that a losing season will be happening. This program only won 3 games in 2018 and after an 11-win season in 2019, they reverted back to that 3-win program again in 2020.

One good thing this program has working for it is that they have 3 games left to capture the third win this season but is that really any coach’s goal? “Let’s go out there and smash ’em up because win #3 of the season is a monster accomplishment for you guys”… Said no coach ever!

So, what is Ken Niumatalolo going to do to keep things at a high level so anything positive can be taken from 2021? I would assume he just keeps telling his men that they have been in some close games that just didn’t go their way and that is certainly true.

Houston struggled to stop Navy and SMU barely scraped by the Academy as well so those could just as easily turn out to be a better outcome. I know seeing the Academies start to throw the ball around lately has made watching their games a little more exciting.

The option to convince a defense you are running the ball and then simply go play-action it just changes the ability for big plays to come. We saw it time and again when Army played Air Force a few weeks that a passing game throws a huge element into the offense that now has to be included to really find success.

Teams can bear down and clog lanes to stop the run with much more success than in recent years. Opening up the playbook for Tai Lavatai will likely be happening now that there is really nothing left to lose. It can’t get much worse than 2 – 7 (Well, actually it can because Temple and Army are still to come) but you get my drift.

Let’s see if the passing game becomes more of a tool than a ploy this weekend for Navy. I think it has to happen because they really don’t have the backfield to support the run game as they have before.

Navy is officially the worst passing offense in all of college football ranking 130th putting up only 54.4 YPG through the air. If the run game is going to fall all the way to 17th in the nation then something needs to change IMO. Last I checked, 16.8 PPG isn’t going to help any program end up with wins to show for the effort.

Give me the Pirates and Ahlers to perform well enough to win this game by no less than those 4 points the line setters are asking. I see a 34 – 21 win for the road team so play it accordingly.

If you’re looking for more picks like this East Carolina Pirates vs. Navy Midshipmen matchup we’ll be providing 4* free College football game predictions on the blog all season long, and check out our Experts for guaranteed premium & free CFB Football picks!