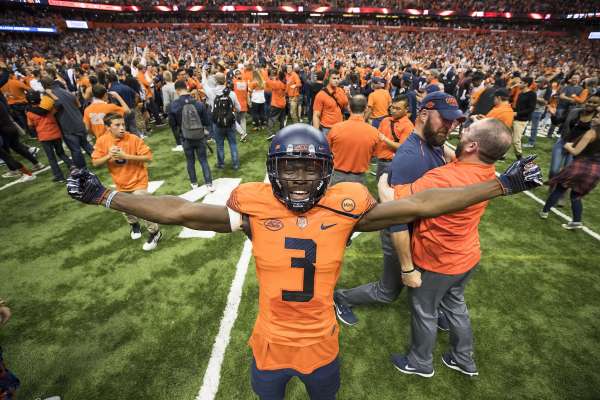 Week 9 college football sees the Eagles and Orange meet at the Carrier Dome.

The Orange are favored by 6.5 points in this Atlantic Coast Conference matchup which is also a Atlantic Divisional game. The line setters are now showing a 50 on the total which is down from the opening 51.5 that appeared on Monday.

We would say it is an important game in the standings but both programs have 3 losses apiece from conference play and BC has the only win among them. However,  a win for either program would give them 5 on the season and put them one step closer to a possible bowl invitation.

BC went 6 – 5 in 2020 and was still left out of bowl season due to all of the craziness that came with the 2020 season. Head Coach Jeff Hafley wants to see the post-season in year-2 with the Eagles to at least get his 6 wins again.

The Cuse has played 8 games because their bye is coming next weekend to prepare for the final 3 games of the regular season. A win for Dina Babers would get his team back in the post-season for the first time since 2018. A double-digit win campaign finished with a convincing 34 – 18 win over West Virginia in the Camping World Bowl.

Neither team may be in the ACC title game but make no mistake there is plenty to play for this weekend for both programs.

Coach Hafley got his team to 6 wins last year and it would have normally been enough to get an ACC team into the post-season. With all of the cancelations, the Eagles simply had no one to play and no safe place to go at the time so the obvious first goal is to get there again. Even with Colgate and UMass on the schedule, which deserves a big whoopie… we can assume a 6-win campaign would see BC invited to a bowl game.

Things started off great at 4 – 0 but now that the ACC portion of the schedule has started it is safe to say that the Eagles are already in some trouble. BC has to now shake off a 3-game losing skid following up the loss to Louisville last weekend, 28 – 14.  On a side note, they got me a wrong play because I thought they would hang around and cover the +6.5 but that obviously did not happen.

The Eagles’ defense created 4 turnovers but the offense simply couldn’t take advantage of it. Now that Dennis Grosel knows the offense is his to run, he threw two INTs and barely completed 50% of his tosses going 17 for 32 with 141 passing yards.

Grosel’s longest completion was for 19 yards to Trae Barry and he only completed balls to 6 different pass-catchers on the day. Depth is not a concern because the passing offense really doesn’t have anything figured out yet.

After seeing it with my own eyes last weekend I can tell why I made a mistake trusting this team to move the ball with any consistency.

Dino Babers knows the bye week next weekend will be huge going forward and it’s because these last 4 games are all going to be tough to win. Even though Las Vegas likes the Orange to take this game, we all know if it was that easy we wouldn’t bother playing the games. Oh, they’re playing this one and 6 wins is not going to be an easy task for this team.

Being a Cuse fan that I am, I usually try to take in all of their games so I know what the hell they’re worth. Did you happen to notice that the 3-game losing streak before the win last weekend came down to 3 points?

Losing close games can be a tough pill to swallow but being competitive and not getting blown out instills a semblance of confidence heading to the next game. It’s a week-to-week thing and everything can be changed by one possession that turns the entire result around.

I am more than impressed with the fight in my boys out there and last weekend’s 41- 36 win over Virginia Tech gave us all some hope. Let’s not forget that we went 1 – 10 last season and Dino wasn’t exactly hearing nice words through my TV quite frankly!

He felt the pressure and he knows that a bowl appearance really needs to come after such a disappointing 2020. The Hokies were up 36 – 27 with just over 5 minutes left to play. The Orange could have easily just started looking forward to this weekend but did you see my damn QB throw the winning TD? One BIG DUDE was coming full-boar at Garrett Shrader and he still threw the pass that won the game getting sent to the ground hard.

I was like OHHH NOOOOO but OHHH YEAHHHH!!! LOL If you get my emotion in a moment like that being a fan. So, Shrader is out for this game and it tears me up because we need him out there. He is not listed as out but he is questionable to go which is obviously concerning.

Can Tommy Devito be the guy? I think we all questioned that when he didn’t win the starter’s role with all of that supposed experience behind him. I certainly recommend you take note of if Shrader starts or not because it would change my opinion of how this game will play out.

If Shrader is in there I love the Cuse to go out and get the job done. A 5th win would be fantastic and I am not picking them as a fan. With Shrader, they are the better team so I hope he goes.

If you’re looking for more picks like this BC Eagles vs. Syracuse Orange matchup we’ll be providing 4* free College football game predictions on the blog all season long, and check out our Experts for guaranteed premium & free CFB Football picks!