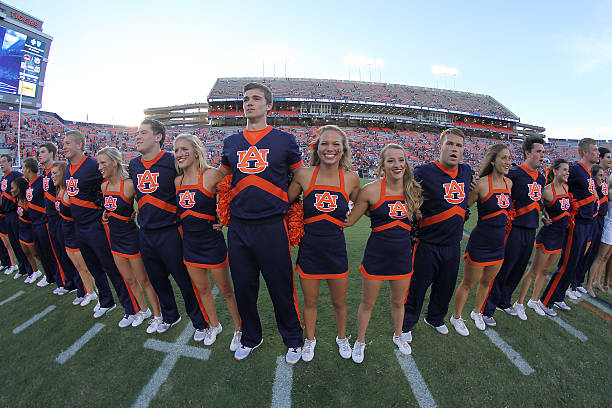 Week 13 college football sees the Tide and Tigers meet at Jordan-Hare Stadium at 3:30 ET and the game can be seen on CBS.

The Crimson Tide are favored by 18.5 points in this SEC matchup but this year’s Iron Bowl doesn’t seem to have much hype behind it. The Crimson Tide have earned their position in the SEC Championship game next weekend and that clash with Georgia might see just a little bit of attention.

Regardless, the Tigers are a mere 6 – 5, and all right, yes, they are bowl eligible… I guess. Alabama State? Doesn’t that deserve a ‘Come on, man’?

How the hell on God’s green earth does an SEC program need to play an FCS outfit to grab an easy win? Yes, money is certainly a factor in the Tigers’ acceptance of playing such an opponent but we doubt it will keep this team out of the post-season.

Anyway, the absence of Bo Nix is certainly going to have long-term effects for this program because he will be absent for this and the expected bowl game as well with a broken ankle.

We all know that Coach Saban is a machine and he will tell his team to go out and leave Jordan-Hare with a win because 11 – 1 looks so much nicer than 10 – 2. Granted, this team has Georgia on their mind but this is still the Iron Bowl and it will always mean something to these programs no matter the record.

The Tide has won the last 5 games since losing to Texas A&M by a field goal and the defense had really been doing a tremendous job to help the offense produce numbers. And oh, did they produce some numbers last weekend despite the scare against Arkansas. I think everyone in the country couldn’t believe it was a TD game with the Hogs last weekend and the TIde almost found a way to lose the game.

By the same token, Tide QB Bryce Young only put up 559 passing yards with 5 TD passes setting the team record for yards in a single game. Oh, he only did it 75 yards and to think this team almost lost that game?

I expect the Tide to roll the offensive passing game again to just stay in sync and be cruising towards a shot at another piece of hardware next weekend. Coach Saban knows a thing or two about trophies, just sayin’.

What if Alabama lays a whooping on the Tigers this Saturday at Jordan-Hare and the Tigers do, indeed, end the year at 6 – 6 expecting a bowl committee to invite them to a party in December.

Nick Saban doesn’t how to prepare his team any other way than to go out and perform at a high level no matter what is clinched. The game next week will come for the Tide no matter the result of this game and the line setters expect a beat down.

On top of that, let’s throw in the fact that Bo Nix has a broken ankle and he will not be coming close to the field for this or the bowl game this team should be playing in a couple of weeks’ time.

Yeah, this Auburn running game will be put to the test because Nick Saban will make Finley have to drop back more than he desires. The last thing this Auburn offensive line needs is a relaxed and confident Tide front 7 barreling into their backfield all afternoon.

Alabama might have 35 points by halftime and without Nix, I cannot see the Tigers giving Alabama a game. The line setters are obviously, feeling a similar noting with a spread of nearly 3 TDs against the Tigers on the road for Senior Day at Jordan-Hare.

The Tide will spoil the party and take out the Tigers 48 – 15 as this time the defense won’t be making those same mistakes as they did against Arkansas last weekend.

If you’re looking for more picks like this Alabama Crimson Tide vs. Auburn Tigers matchup we’ll be providing 4* free College football game predictions on the blog all season long, and check out our Experts for guaranteed premium & free CFB Football picks!