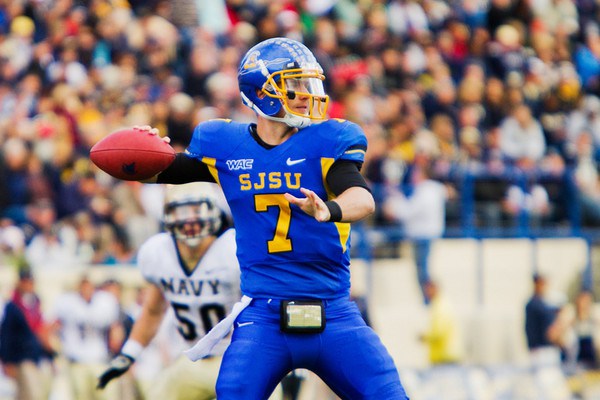 A Mountain West showdown in San Jose, California takes place Saturday night when the Boise State Broncos come into town and face off with the San Jose State Spartans.

Boise State is coming off their second loss in a row on the blue, which is the first time since 1989 that this has happened to the Broncos

San Jose St is coming off a win against Hawaii in a 42-23 rout at home.

The Broncos are in a bit of a funk as of late, losing twice in a row on the blue turf, which I previously mentioned was the first time since 1989 that this has happened.

Freshman QB Brett Rypien has been really struggling as of late turning the ball over 6 times in the last two games.

The Broncos defense will be the key to this game in winning the turnover battle, with a freshman QB at the helm you expect some miscues, so the defense has to step up on Friday. The defense has been rattled with injuries to key secondary players that they will get back this week.

Mountain West all time career interceptions leader Darion Thompson will be back on the field after sitting out one game with a concussion.

San Jose State is playing really well especially on offense after putting up 42 points and also gaining 500 yards as well.

They will look to continue their offensive dominance this Friday against a Boise State team that has really struggled the past two weeks.

To win this game because they are going to be the underdog the turnover battle will be the most important thing to win, as well as not turning the ball over.

Look for the turnover margin to really decide the game Friday in San Jose.

Boise State is best team on the field in this game, but they have been playing sloppy football as of late, but should still be able to take care of the Spartans on the road.

The Boise State spread is low because of the losses in the last two weeks but they should bounce back nicely against a poor San Jose State team.