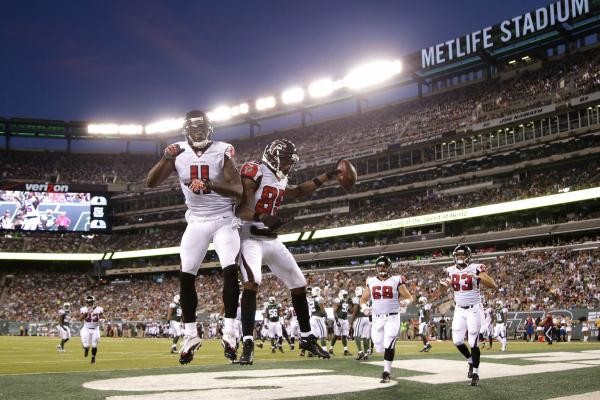 The Seahawks advanced by snuffing out Detroit at home last weekend. This group has tons of playoff experience but they are definitely a different team when they are not in front of their home fans.

Atlanta has been sitting and waiting for a week. It will be interesting to see if a finesse team like the Falcons can take it to Seattle and set the tone.

Kick off is set for 4:35 PM ET with the Seahawks Pete Carroll looking to best one of his former staffers in Atlanta head coach Dan Quinn.

Quinn my not have the defense he had in Seattle but his offense is something else.

The win over Detroit was about as boring as could be until Seattle busted open in the 4th quarter. Seattle had no trouble containing the Lions offense so they were content to play pretty conservatively.

If you watched the game you saw Paul Richardson makes some amazing catches.

However, it was Thomas Rawls that was the Seahawks biggest weapon, rushing for 161 yards. He definitely looked fresh. Russell Wilson looked fine but he was not very dynamic in this one.

The Seattle defense limited the Detroit run game, forcing Matt Stafford to win the game with his arm. Even though he is capable of doing it he did not have a strong game.

They were able to sack him a couple of times and make life generally uncomfortable.

The strategy will be the same against Atlanta, but more difficult given the presence of Julio Jones, one of the league’s best receivers.

Quinn might have a reputation as a defensive coach but when you jump into a team with Matty Ice and Jones there is no reason to fight being a great offense.

That is what the Falcons were this season. They were first in points and second in yards and rode that all the way to the NFC South title and a #2 seed.

It is not all passing too, they were fifth in rushing with Devonta Freeman and Tevin Coleman providing a nice 1-2 punch.

They have been drafting to improve the talent on the defense but it still hasn’t quite come together and as a result this team plays in a lot of shootouts.

I am not sure I would call it a shootout but these teams played a close contest with Seattle winning by 2 in mid October.

That was up in Seattle though. Atlanta too is a much better team at home.

The most impactful player on the defense is Vic Beasley, who led the team with 15.5 sacks. He has a shoulder injury and might be unavailable for the game this weekend.

I am not sold on this Atlanta team and the track record for teams with high octane offenses flaming out against strong defenses is not very good.

Plus Seattle seems to always have a little more to give while I wonder if Atlanta might not have already peaked.

The key battle will be between Jones and CB Richard Sherman. Jones has to win that battle for the Falcons to be what they have been during the regular season.

If you’re looking for more NFL picks like this Seattle Seahawks vs. Atlanta Falcons matchup we’ll be providing 4* free NFL predictions on the blog all season long, and check out our Experts for guaranteed premium & free NFL Football picks!