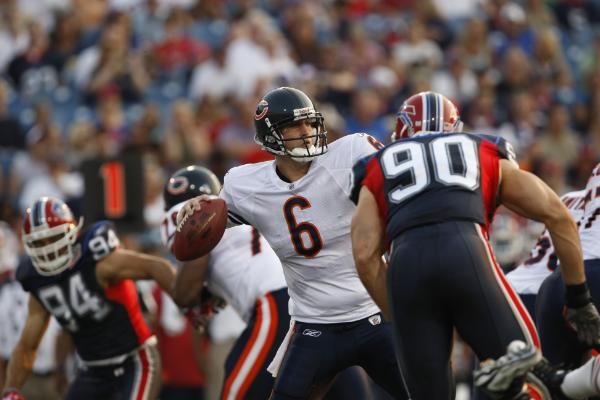 The defending champs open play here in the 2016 preseason Thursday night when they head into Chicago for some preseason action.

We’ll get a very different look at this Denver team throughout the preseason, as both QBs who helped lead them to a Superbowl last season have since moved on.

It was the typical storybook ending for Denver last season.

Peyton Manning led the Broncos to a hot start, only to go down with injury and hand the ball over to Brock Osweiler.

He then got Denver into the playoffs, only to give the ball back to Manning and see him bring home a Superbowl victory.

Now, both QBs are gone and Denver will use the preseason to really give themselves a better look at what their future holds heading into this season.

If things weren’t already confusing enough for this Denver team, their first released depth chart sees them with co-#1 QBs.

The Broncos have Mark Sanchez and Trevor Siemian listed both at the #1 spot, which means the competition is up for grabs.

Both QBs will get some work here, along with Paxton Lynch, the rookie out of Memphis who could prove to be a darkhorse later in the season.

Most teams really get sick of the length of the preseason. However, right now Chicago probably isn’t one of those teams.

The Bears are banged up heading into their preseason opener, looking to get guys back to 100% prior to the season.

TE Zach Miller and WR Eddie Royal both have missed the entire week of practice, as they continue to go through concussion protocol. Alshon Jeffery, who this team needs healthy, was given limited practice time with no pads this past week, as he battles a hamstring injury.

If all that wasn’t bad and worrisome enough, Chicago will be without starting center Hronis Grassu, who tore his ACL in a scrimmage. Ted Larsen will start here for the Bears and is likely going to be his replacement, which the preseason will give him time to adapt.

The silver lining through all this is that Chicago doesn’t lack depth by any means. This team has a lot of options at a lot of different positions.

Likely, Brian Hoyer and David Fales, along with even Conor Shaw, will get a majority of the snaps. Keeping Cutler healthy heading into this season is a giant goal for this Bears team.

These two teams will have different mentalities here.

Denver will be looking to use both QBs and give them significant time to get themselves separated in the competition.

The Broncos have a lot more motivation here. With both QBs needing good performances, they should come out on top here.

If you’re looking for more picks like this Denver Broncos vs. Chicago Bears matchup we’ll be providing 4* free NFL predictions on the blog all season long, and check out our Experts for guaranteed premium & free NFL Football picks!