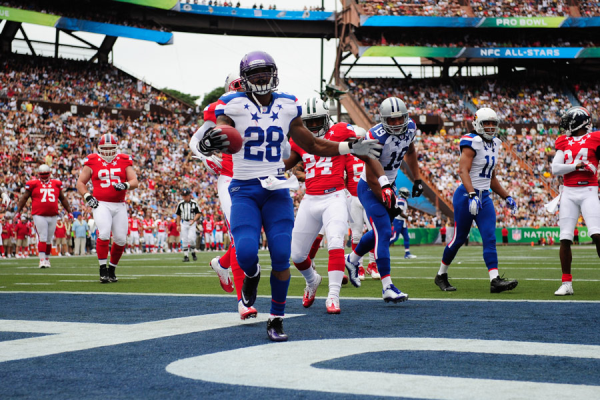 The Pro Bowl heads to Orlando on Sunday night as the AFC and NFC clash.

The league has decided to go back to the traditional AFC vs. NFC format, something they strayed away from last season.

The AFC was poised to have two of the best QBs representing them in this year’s Pro Bowl, but thanks to deep runs by the Patriots and Steelers, the AFC will feature Andy Dalton and Philip Rivers.

Bills QB Tyrod Taylor was reportedly offered a spot along side the two, but because of a groin injury, he declined the invite.

As far as targets are concerned for this team, they’ll have a completely different look from what was announced back on December 20th.

Emmanuel Sanders will headline the replacements as he will fill in for Amari Cooper, who had his best season of his career. Jarvis Landry will replace the injured AJ Green while Demaryius Thomas takes over for the well deserving Antonio Brown.

The AFC will have their work cut out for them here.

The compliment of replacements because of deep playoff runs and injuries really has this team lacking stars.

The NFC will feature a lot more talent as far as the QB position is concerned.

Despite losing Matt Ryan to the Superbowl and Aaron Rodgers to a deep playoff run, the NFC will feature a pair of solid replacements that come in off solid seasons. Kirk Cousins and Drew Brees will be featured along side Dak Prescott, the rookie sensation.

Speaking of rookie sensations, Ezekiel Elliott will also be featured here in this season’s Pro Bowl, as he’ll be battling teammate Dak Prescott for the Rookie of the Year award.

Out wide, expect Dez Bryant and Odell Beckham Jr. to be the duo who put on a show. After short playoff appearances, the explosive wide outs always tend to be the center of the entertainment.

The NFC has far more talent on paper, but games like this are tough to separate the sides because of the lack of defense.

4* Free NFL Betting Prediction: 2017 Pro Bowl Final score prediction provided below since ODDS are OFF currently as of press time.

With the talent levels different, the NFC has a strong edge here.

Expect an obvious shootout, with the NFC making more big plays in this one.

If you’re looking for more NFL picks like this AFC vs. NFC matchup we’ll be providing 4* free NFL predictions on the blog all season long, and check out our Experts for guaranteed premium & free NFL Football picks!