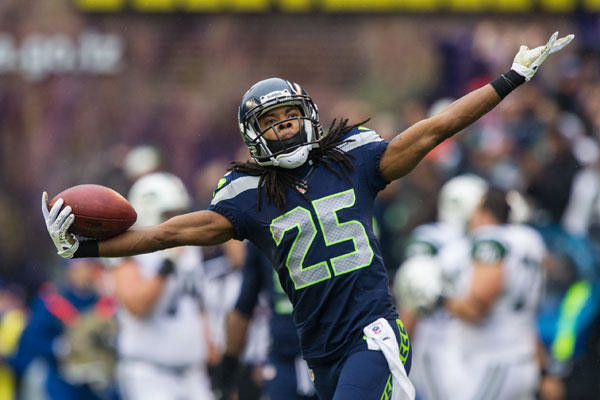 The main core still exists however – a newly married Russell Wilson will be in control of the offense while the Legion of Boom still exists as one of the most feared secondaries in the game. (For now they have original LOB member Brandon Browner back as well – if he can stay on the field).

So what are Seattle’s chances of a second Super Bowl in three years? Let’s take a look.

For the Seattle Seahawks offensive success seems to depend on one thing in 2016 – an offensive line that lost their anchor Russell Okung who departed via free agency.

The O-line was an issue before he left – Russell Wilson ran for his life last season and was lucky not to get injured at some point in the season.

The Line will be talked about all season long – Seattle seemed to do little during the offseason to ensure the protection of their franchise quarterback which is a bit of a concern as we head into 2016.

But Russell Wilson will be Russell Wilson. His mobility has been tested in the past and he has come through with flying colors in every occasion.

He will likely be throwing on the run as he can do better than anyone in the game and he will be running the ball out of the backfield with effectiveness as always.

Wilson is a D-coordinator’s nightmare – no reason to think differently about this upcoming season.

Wilson’s weapons, although not household names are solid.

Doug Baldwin who enjoyed a breakout campaign last year and was virtually unstoppable toward the end of last year is back in the fold after signing a nice extension in the offseason and speedster Tyler Lockett looks poised to take the next step after catching 51 passes for 664 yards and 6 TDs as a rookie despite being sparingly used.

If Seattle can ever figure out how to use Jimmy Graham who was a disappointment before his season ending injury last year, Seattle’s passing game could be a serious threat.

And it may have to be with the retirement of Marshawn Lynch in the Seahawks backfield and the uncertainty that surrounds Lynch’s successor Thomas Rawls.

Rawls went for 630 yards (an incredible 5.6 TPC) as a replacement for Lynch last year but he enters the season still largely unproven and off an ankle injury that ended his season early last year.

Seattle spent third- and fifth-round selections on C.J. Prosise and Alex Collins in the draft to solidify their running game.

If Seattle has proven anything over the years, it’s that they can make any rusher look good!

The Seahawks should be fine offensively in 2016 with the potential to be great! If Russell Wilson is protected and Rawls nears his potential the Hawks are scary – period.

The fact remains in Seattle that they will just have to be good, not great and that their defense will be the difference.

Seattle will trot out one of the best secondaries in the game as per usual for a defense that allowed 17.6 points per game last season.

Kam Chancellor, Richard Sherman and Earl Thomas were dominant as usual last year – this unit added a familiar piece in the offseason.

Brandon Browner who was a disaster in New Orleans last year reunites with his former mates and if he can rediscover his form from a few years ago, nobody will be able to throw on this team.

Michael Bennett and Cliff Avril return as one of the best edge-rushing tandems in the NFL.

KJ Wright and Bobby Wagner are absolute stud linebackers and second-year guy Frank Clark will take over from a departed Bruce Irvin – Irvin will be sorely missed but not as much as most think.

Sure the interior pass rush may be lacking but the Hawks defense is littered with All-Stars, capable of carrying any team. Seattle’s defense is scary again folks – absolutely top shelf!

The Seahawks will be in a battle with the Arizona Cardinals all season long in their Division and in the NFC. Not only are they elite top-to-bottom but they are one of/if not the best home teams in the game.

Seattle has gone 31-5 on home turf in their last four seasons including playoffs – you can count on another 7 or 8 wins this year in their building!

The Hawks looks like an 11-5 team to me maybe even a 12-4 team. Although I like the Cards a little more because of Seattle’s sketchy O-line it wouldn’t surprise me in the least to see Seattle go all the way this season.

What do you think about our 2016 Seattle Seahawks predictions? Please leave us a comment below telling us how you think they’ll do in the 2016-2017 NFL Season!