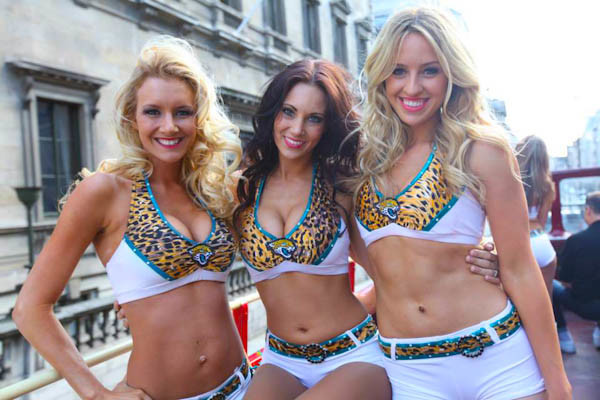 Looking for 2016 Jacksonville Jaguars Predictions? We’ve got your back. Despite years and years of serving as the bottom feeder in the bottom feeder of NFL divisions, there are plenty of fans ready to hop onto the Jaguars’ bandwagon. There’s a lot to like, certainly.

Quarterback Blake Bortles is ready to breakout. Getting 2015 first-round pick Dante Fowler back from injury is a great bonus. And the money spent in free agency has many thinking a giant leap forward is in the cards.

But no team’s ever won a Super Bowl by opening its wallet and dishing out big bucks on free agents. Bortles is a likely regression candidate. And Fowler joins a group that wasn’t any good last year.

There’s still plenty of work to get done in Jacksonville.

Jacksonville wasn’t shy about spending money in the offseason. But more important than all that was the success the team had in the draft. There was talk of Florida State defensive back Jalen Ramsey being the No. 1 overall pick and the Jaguars got him at No. 5.

Then in the second round, the team got a top-10 talent in UCLA linebacker Myles Jack, who fell because of a concern over his knee.

Adding running back Chris Ivory isn’t a move that jumps off the page, but he’ll give them a more consistent ground game.

Kelvin Beachum is an outstanding addition at left tackle.

Bortles had plenty of attention on him in the preseason of his rookie year for looking like a younger, healthier version of Ben Roethlisberger, but last year is well all the dominoes fell for him and he was able to put up the numbers to match the hype.

Much of his success came in garbage time, though. He posted a first-half quarterback rating of 79.3, and a 97.5 rating in the second half. In a related note, the Jaguars were 2-10 last season when trailing at the half.

At wide receiver, Allen Robinson is very much not a candidate for regression, as he’s joined the upper-echelon of pass catchers in football.

Allen Hurns is the guy that benefitted from all that garbage time production, but he remains a quality No. 2 receiver, even if he comes down below the 1,000-yard receiving threshold this season.

A full season of a healthy Julius Thomas will help, and Ivory is a more reliable option out of the backfield, but T.J. Yeldon’s roll shouldn’t diminish too much.

The team effectively added three first round picks to its defense in one offseason in Fowler, Ramsey, and Jack. Jackson should be a great addition on the defensive line, and Amukamara and Gipson should help solidify the defensive secondary.

Gus Bradley is a defensive head coach, and the front office is showing a lot of faith in him by keeping him around to coach this improved squad.

He’s won only a quarter of his games through three seasons, and this is a boom or bust season for him.

It may be a little early to hop aboard the Jaguars’ hype train, but it’s good to see the team making moves that make sense after so many years of ineptness.

There’s a lot of good young talent on the roster, and while some of those flashy free agent signings may suggest the team is ready to win now, it simply is not.

There’s more to the Jaguars rebuild that hasn’t played out just yet. Some fans of the team may have their sights set on the Super Bowl, but playing for a .500 record may be a more realistic goal, even if they top out at six or seven wins.

What do you think about our 2016 Jacksonville Jaguars predictions? Please leave us a comment below telling us how you think they’ll do in the 2016-2017 NFL Season!