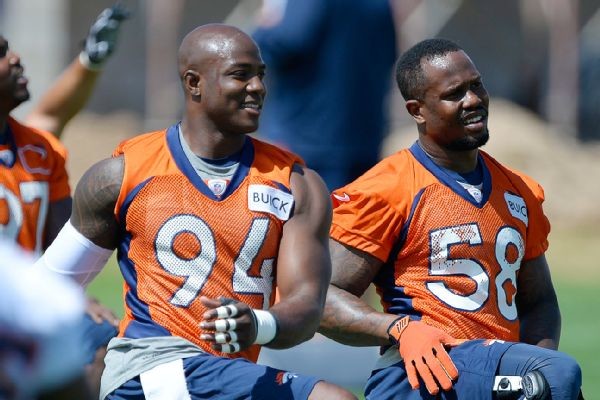 Looking for 2016 Denver Broncos predictions? We’ve got your back.  The defending Super Bowl Champion Denver Broncos begin their Title defense looking like a much different team than the one that took the field in February.  Denver had been a yearly threat to win it all but on paper look far from that as we head into the season.

Can they surprise again or is this team destined to take a major step backward? Let’s take a look.

Denver won last year in spite of it’s somewhat poor offense – Peyton Manning was brutal and Brock Osweiler was just adequate. To think that they will be drastically better this year is a pipe dream.

The fact is that the Broncos lost a few key pieces along the offensive line and they will go into the season hanging their hopes on Mark Sanchez who was pretty bad in relief of Nick Foles in Philadelphia last year.

As mentioned, the O-line took some hits during the offseason and now will be reliant on the oft-injured but very talented Russell Okung to hold down the fort.

Okung’s presence in the lineup seems like a huge factor in whether or not the Denver offense thrives or flops. Simply put Denver’s O-line looks unflattering – not a good sign with the jittery and turnover prone Sanchez leading the way.

The rest of the offense is OK – too bad they will have to rely on Mark! Demaryius Thomas and Emmanuel Sanders are still a terrific 1-2 receiving punch and 2015 third-rounder, Tight End Jeff Heuerman should be a decent fill-in for the departed Vernon Davis.

CJ Anderson will be back as the starting running back and Ronnie Hillman and fourth-round rookie Devontae Booker should be good compliments for a running game that will be heavily leaned on this year.

To me it looks like Denver’s offense is a step, maybe two behind last year’s… and that’s saying something! Hopefully we see Paxton Lynch at some time this year – he may give the waning offense some hope going forward.

Denver’s defense was the reason they won it all last year – period! The Broncos made some of the best offenses in the game look pedestrian last year – something they could do again this year.

But there are a few issues with the defense as of right now as well – the biggest of which is Vonn Miller’s contract holdout that threatens to end his season before it starts.

Assuming Miller signs, he and DeMarcus Ware will be one of the best pass rushing tandems in the game again – age and years of ploughing through opposing O-lines could catch up to these guys eventually but my guess is that they still have a few good years left.

Darian Stewart and T.J. Ward will return as the starters at Safety – as solid a duo as there is in the AFC while cornerbacks Chris Harris and Aqib Talib will also be back to lock down opposing receivers.

So, despite losing Malik Jackson, who signed a $90 million deal with the Jaguars, Derek Wolfe, a dynamic defensive end and inside linebacker Danny Trevathan the Broncos have the pieces to be one of the better defensive teams in the NFL yet again.

Denver is a tough team to prognosticate this year. Sure their QB situation is a huge question mark this year but last year’s pivot play was anything but good!

My guess is that this team takes a step backward this year – too many losses on both sides of the ball – not to mention a tough schedule against an improving AFC West and the rest of the league.

To me Denver is a 9-7 team – anyone with Mark Sanchez at the helm isn’t worthy of anything higher!

Denver finishes tied for second in the AFC West and out of the playoffs!

What do you think about our 2016 Denver Broncos predictions? Please leave us a comment below telling us how you think they’ll do in the 2016-2017 NFL Season!