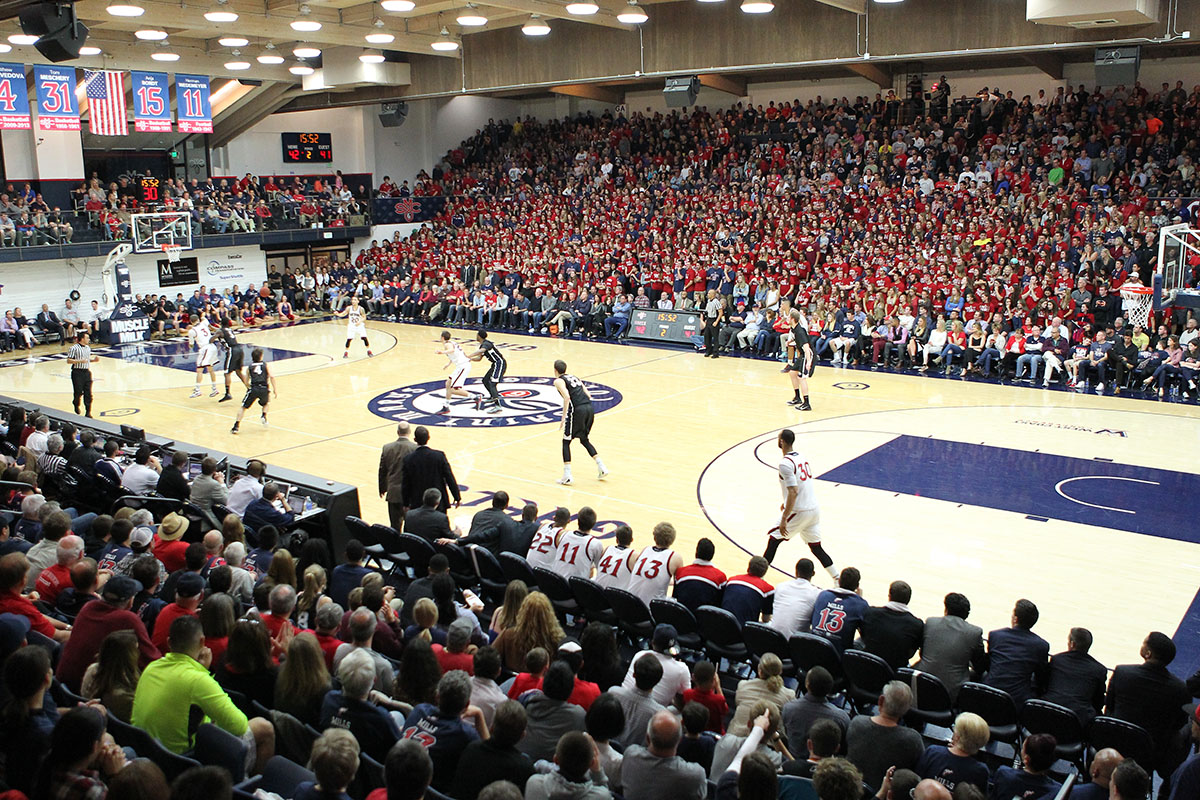 You know, I instinctively put McKeon Pavilion as the venue for the game tonight and I guess it is still going to take some getting used to calling it University Credit Union Pavilion instead. Do we really have to?

Might we actually see 5 WCC programs dancing this year? The talk of the town was BYU being among the top-3 in the conference but now Santa Clara is starting to gain attention. The Broncos are the 4th place team coming into this week’s games and now BYU is 5th behind them. I think every program has to be thankful that Gonzaga is on such a perch and having been ranked in the top-3 all season.

Amazingly, neither San Francisco nor St. Mary’s are ranked despite already pocketing 21 and 20 wins apiece. Let’s just say that the WCC tourney is going to be a fun one to watch even if Gonzaga does cruise through everyone when we get there.

With 21 wins already, the Dons are holding the second-place spot in the standings at the moment behind Gonzaga and a 1/2 game ahead of the Gaels. The Dons are getting about 3.5 points on the early line although it has already fallen to a straight 3 at a few sites out there.

St. Mary’s doesn’t lose often on this floor and they’ve already taken down the Dons on their home court looking for the season sweep of the series. The Dons have lost 5 straight times to the Gaels and the history between these two programs doesn’t help matters much either.

San Francisco and St. Mary’s have met 33 times and the Dons have won 5 of those contests having also endured 15 straight outings with a loss to the Gaels between 2007 and 2014. The landscape of Don’s basketball has certainly grown since then and now we are growing accustomed to seeing them be extremely competitive despite not much of a post-season to show for the efforts.

I don’t know what you were doing in 1998, but that’s the last time the Dons were in the NCAA Tournament at all, much less dreaming of the mid-1950’s glory. I do believe that will come to an end this season as long as the Dons finish strong and don’t get killed in their WCC tourney opener. I think most of us believe the Dons have already done enough to take an at-large bid but we never know anymore. We should be seeing at least 4 WCC programs in either the NCAA Tournament or the NIT this season.

We are seeing projections of a 7-or 8 seed in the big dance for St Mary’s and the Dons possibly in the show with a 10-seed. Santa Clara is expected to head to the NIT and the BYU’s recent struggles have the projections with no Cougar program on their list to be in the post-season at all. A 2018 finals appearance at the CBI is the farthest we have seen the Dons get in the last 7 years when San Fran was dumped in the opening round of the NIT.

The Gaels home record is outrageous again and coming into Moraga has been a place where many dreams have been crashed over the years for plenty of WCC programs in recent years. Yes,  even Gonzaga had their insane bouts with the Gaels in this gym because this cozy court makes it quite loud for opposing shooters.

The Gaels have the confidence of knowing they have simply not struggled to come away with wins over the Dons on whichever floor the two teams take. In the first meeting on January 27, the Gaels escaped the City by the Bay with a 72- 70 win over the Dons. That sounds simple enough, right? Close game, tight win for the Gaels… Yeah, no! St/ Mary’s was down 41 – 24 at halftime and the Dons had finally figured out how to bea… oops!

No, the comeback, baby! It’s games like that that build camaraderie and the Gaels have only lost to  Gonzaga and Santa Clara since that win over the Dons. Matthias Tass had the best game he has put up since joining St. Mary’s with 27 points on that night but he has not come close to matching that performance since then.

Tass is the Gaels leading scorer averaging just under 13 PPG and he has been a double-digit scorer in 20 outings this season in this final season wearing that big #11! You won’t be able to miss Mr. Tass if you’re looking for him tonight, and even if you weren’t looking for him he’ll find you! The 6-10 big man from Estonia will make his presence felt tonight and he better come up big the rest of the way to follow this game up.

The Gaels have BYU, San Diego, and oh, the final game of the regular season will be played on this floor too. It’s just another meeting with Gonzaga… pfft!

The oddsmakers challenged me to pick up at least 133 points tonight between these two programs?

Yes, yes they will find their way to a similar outing that landed 140+ in San Francisco. I have 73 – 70 and a thriller tonight!