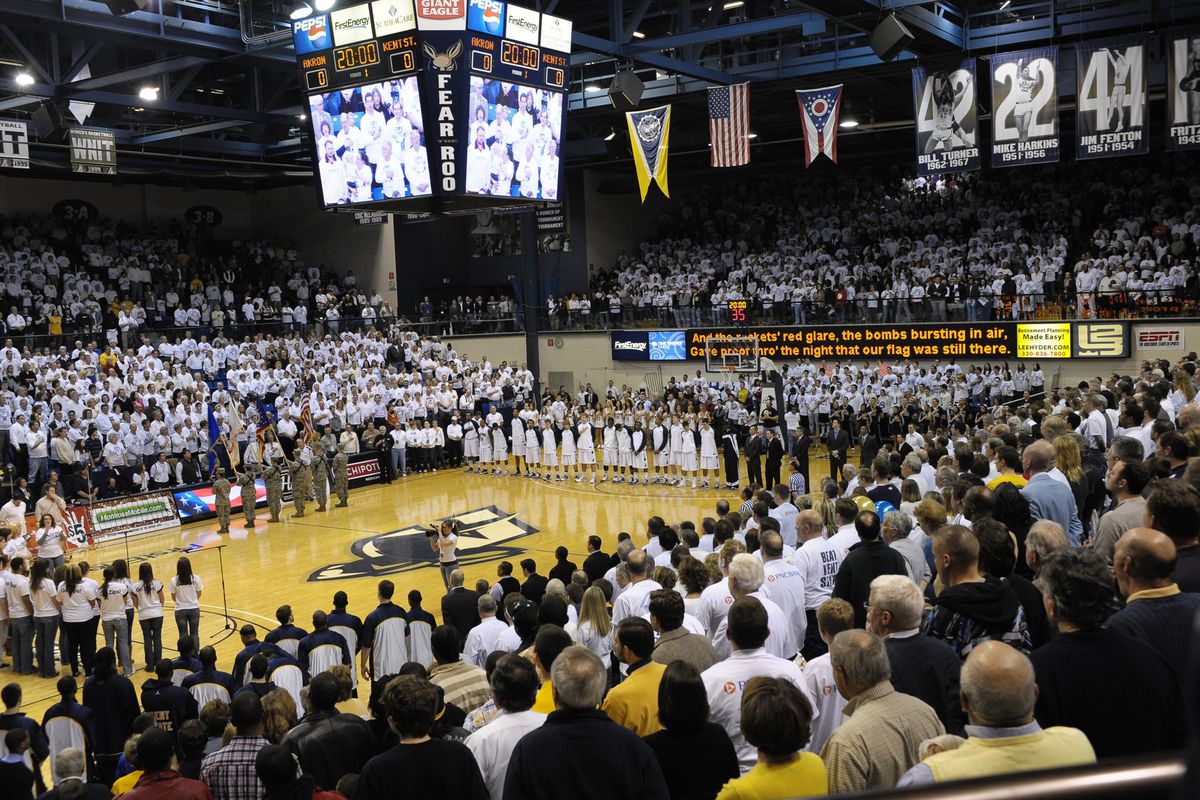 The Akron Zips find themselves as -3.5-point home favorites as they play host to Kent State on Friday night at Rhodes Arena. The Zips have suffered only a single defeat from 11 home games this season which surely contributes we see chalk on Akron tonight.

Kent State has managed a 4 – 4 split of their 8 road games throughout this year but someone forgot to tell those oddsmakers that the Flashes are hot, baby! The Golden Flashes have been a bettors’ dream over their last 8 games covering and winning 7 of their last 8 games.  With a 5-game win streak in tow, a trip to Akron to take on a Zips squad that has also found wins from 7 of their last 8 outings.

That makes this a showdown with two teams that are playing well as the MAC Tourney isn’t far away. Kent State took the first meeting between these two teams back on January 14, and that is the game that kicked the Flashes into gear which started their run of 7 wins over their last 8.

Speaking of drukn, or uh, drink, wait, no, they were drunk, LoL… What the hell is 127.5 on this total? HELLO? EARTH TO VEGAS; YOU FUCKED UP AND GAVE US ALL FREE MONEY! Seriously, this line might have been fine early this season but in the now? That is a gift in February as far as I am concerned.

Hi, Akron tonight, and the two conference leaders Toledo and Ohio on deck so these next 3 games are absosmurfly huge! Hmm hmm, I said that I know, bear with me, LoL. Hey, they do have blue and gold in that jersey of theirs.

Seriously, the Flashes’ last 5 games have seen this team shooting lights out and everything is dropping for them right now. Let’s show ya what I mean…
75 vs. Western Michigan
91 vs. Bowling Green
78 vs. Miami, OH
90 vs. Eastern Michigan
And 76 vs. Bowling Green last time out which smells like the net on fire from my house in NY. Smell that twine? These guys are finding it right now and trends are all about what is happening in the now.

History stats and heads-up numbers are all well and good, but none of that matters the way these two are playing right now.  Sincere Carry is living up to his name carrying this team on his back at times.

Carry just put up another 17-point effort in the win over the Falcons and he’s been doing this all season for the Flashes. He averages 17.6 PPG and he has only been held under double-digits twice all season with a high of 30 points from the first meeting with Bowling Green back on January 29. The junior guard is a stud and you may see 6 – 1 on that profile page but the dude plays a helluva lot bigger than that number may lead you to believe.

It’s a damn good thing he showed up too because the starting 5 as a whole didn’t hold their own. Voncameron Davis and Cliron Hornbeak got the starting nod for Coach Senderoff against Bowling Green. We never saw either of them again basically, as Hornbeak played 3 minutes and was MIA from there. Davis started and played 9 minutes, took a couple of shots, and committed a foul and that was his night in a nutshell.

Luckily, Giovanni Santiago came off the bench and went off for 18 points while Beck and hamilton each provided 8 off the pine in the win over BGSU.

The Zips are 9 – 3 in MAC play and only two games behind Toledo for the top-seed in the conference with the Tourney right around the corner. Akron is riding a modest 3-game win streak coming into tonight’s home contest but they have won 7 of their last 8 as I mentioned and their defense has been stellar during this stretch.

Over the last 8 games, the Zips have held 4 teams under 59 points and they only allowed 44 points to Eastern Michigan in a wild, low-scoring 46 – 44 win a few weeks ago. Akron has only allowed an average of 62.7 PPG which ranks them 31st in the nation in scoring defense. By the same token, this team has found their way to 70+ in 5 of those 8 games so they can transition and turn defense into offense as well.

In the 70 – 64 win over NIU last time out, Akron was aggressive and got the Huskies in foul trouble which led to 26 free-throws, 22 of which found money. Enrique Freeman was an animal on the floor and around the rim scoring a team-high 21 points with 13 boards in the win. Freeman needed a big showing as Zip’s leading scorer, Ali Ali, was unable to provide much of a spark. Ali ended the game with only 6 points and he committed 6 turnovers as well.

Luckily, the bench provided a lift as 4 players combined for 16 points to help pick up the slack from a struggling Ali combined with a 2 point night from Brain Trimble Jr. who started and only saw 18 minutes struggling big time on the night. Trimble was 1 for 4 from the floor and 0 for 3 from behind the arc while committing 4 fouls.

We have my famous ‘Drunk Linesetter Alert’ back again. Do you remember when I hosted the NCAAF Throwdown podcast for 4 years? Yeah, every time I caught the oddsmakers setting a stooopid line I will call them out and label it just that. I think 127.5 is fucking hysterical and unless both busses crash en route to the venue? Out of your fucking mind not playing this total tonight! GL out there!

If you’re looking for more College basketball picks like this Kent State Golden Flashes vs. Akron Zips matchup we’ll be providing 4* free college basketball predictions on the blog all season long, and check out our Experts for guaranteed premium & free NCAAB Hoops picks!