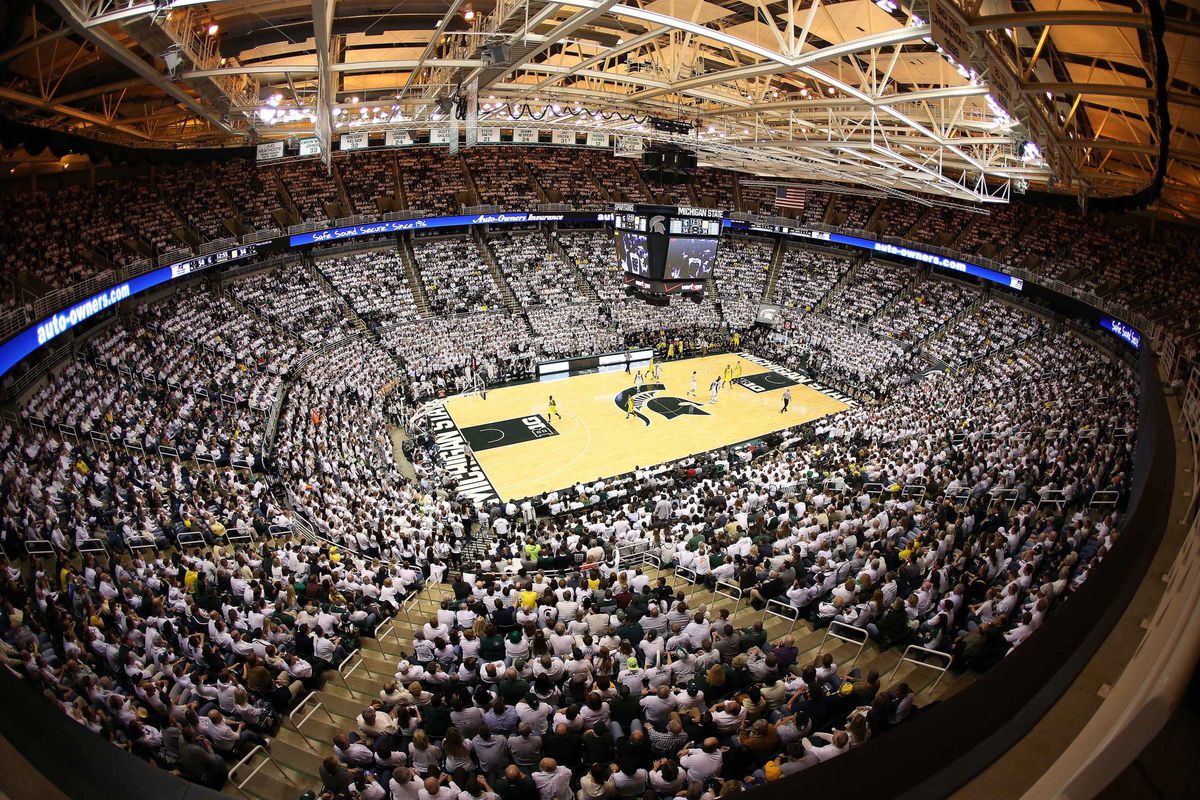 A pair of ranked Big Ten programs take the Breslin Center court on Saturday as positioning towards the conference tourney is on everyone’s mind. Illinois and Michigan State are featured in the top-6 of the Big Ten standings coming into this weekend and that makes this a big battle with only a handful of games to play in the regular season.

The Illini are coming off a loss to Rutgers last time out (You’re welcome for that play on Rutgers), and Illinois has lost 2 of their last 3 games coming into this affair at Breslin Center. Illinois eeked out a 56 – 55 win in the first meeting between these two teams and the season sweep would go far in not only the Big Ten standings but the expectations for a bid in the NCAA Tournament.

We all are basically expecting both of these programs to land in the post-season so a strong finish is obviously going to support the cause with the committees.

Sparty has lost 3 of their last 4 games after suffering a 62 – 58 defeat at the nads of Penn State last time on the floor, but the loss still leaves Michigan State with a 6 – 3 road record this season. That is not too shabby. Michigan State will play 3 of their next 4 games on the road before returning home for the regular-season finale against Maryland here at the Breslin Center on March 6.

The Illini need to just let Mr. Cockburn do his thing and I just covered the Illini Rutgers game so you know I mean if you read that preview. Oh, did you not go 2 – 0 with my double play on Rutgers and the Total? Well, I tried to make it rain on you so I hope you grabbed those two gems the last time the Illini were on the court.

Rutgers came away with a convincing 70 – 59 win and you know I could reel off plenty about that game watching every second of it myself. I tend to take my previews to heart and I knew that game would be on the tube. Rutgers had the Illini’s number all game long as they took a 33 – 24 halftime led and basically cruised from there. I am pretty sure I told you Cockburn would get his 20 points and that Rutgers would be cool with that… And they were… and he did! Cockburn is just on another level and we know this because he still is averaging 21.4 PPG despite the effort in the loss.

Isn’t it nuts that your scoring average can come down a bit when you ONLY put up 20 points? I know, right?! The dude is a stud and I assume you already knew this.

Damonte Williams started and played 29 minutes but he scored as many points as you and I did who were watching the game on TV. A scoreless effort from anyone for a team that plays 7-8 guys all night is going to hurt a little so Williams will need to get back on track after putting up more turnovers than points.

Alfonso Plummer saw his average fall below 15 PPG because of his 4 point effort in the loss and because Jacob Grandison only found 5 points he is at 9.9 PPG for the season. Those are two of Illini’s top-4 scorers so that duo will need to contribute much more than that down the stretch.

If you aren’t aware of Trent Frazier’s ability to take over a game, you should tune in and watch the dude just drive and find his way to points. Frazier will end this night with 16 to keep the Illini in this game along with Cockburn.

Just because the Illini ran into a hot Rutgers program don’t let that reflect your thoughts on how good this Illini program is and has been this season.

Sparty isn’t playing their best hoops right now either, and that makes this a highly intriguing contest because of positioning for the Big Ten Tournament. Michigan State can ill-afford to get swept by the hands of the Illini because that obvious tie-breaker would go to Illinois in the final standings.

The Spartans are an average 12 – 4 at home this year and they had no right almost winning the first meeting with Illinois after their dreadful first-half showing. Illinois was up 34 – 20 on Sparty going to the locker room and Tom Izzo must have lost 2 veins and 2 pieces of chalk during his halftime speech to get his men going for a second-half that was insane.

I mentioned it was 56 – 55 and oh, did I mention there was no Mr. Cockburn on the floor for that contest? Illinois still got past Sparty without Cockburn so we might envision this being an even tougher order to fill with him healthy.

Did you see how that game ended with the Illini? Illinois misses a free throw to make it a 3-point game with only 9 seconds left and that left Malik Hall the chance to take a hot but he got fouled and went to the line to possibly tie it up with only 0.2 left to play. HE hits them both and they go to overtime and the comeback would have been complete. Thud! Hall misses the front end of the two-shot opportunity and it looked like he tried to miss the second one for a tap-in try but he hit the free-throw to make a 1-point game.

The Illini in-bounds the ball… drive home safely! So that was a tough way to put your bench player in that position as Hall ended the game with 7 points off the bench for Sparty.

Sparty has really only lost twice here and this crowd might be in full throat for 40 minutes because it will be a tight game. This is a big game for both programs and the line setters aren’t sure who to favor. I see pick em and a -1 at many sites on the early line so who knows what the line might be for the live tip-off.

I have Illinois recovering from the Rutgers loss as Sparty also tried to get in Rutgers’ way and got stumped with them too. The better team with Cockburn on the floor is the Illini with Frazier flying around making plays too.

If you’re looking for more College basketball picks like this Illinois Fighting Illini vs. Michigan State Spartans matchup we’ll be providing 4* free college basketball predictions on the blog all season long, and check out our Experts for guaranteed premium & free NCAAB Hoops picks!