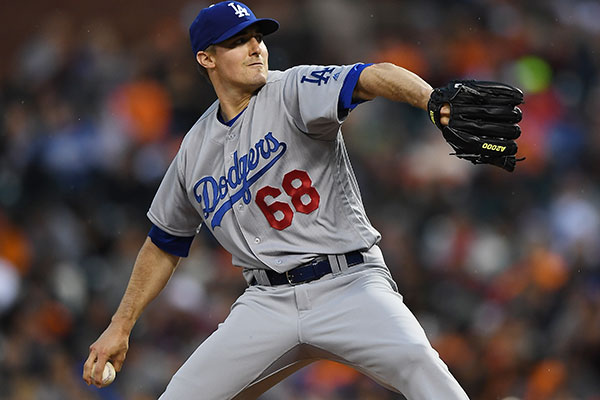 The Dodgers have won 7 of their last 8 home games facing the Giants.

In the 2nd game of this 3-game series yesterday in a pitcher’s duel the Dodgers beat the Giants 1-0.

The Giants rank tied for 17th in the Majors in runs scored and 6th in team ERA.

San Francisco has been shut out in 2 of their last 3 games.

Matt Moore 7-10 4.18 ERA) goes for the Giants tonight and the Giants took the loss in his last outing when he went 5 innings and gave up 3 earned runs in a 9-5 loss to the New York Mets.

The Giants won Moore’s first outing after he came to San Fran in a trade with the Tampa Bay Rays, but they have dropped his last 3 starts.

In Moore’s last start for Tampa Bay he faced the Dodgers and had a great start going 7 innings and only giving up 1 earned run in a 3-1 Rays win.

The Dodgers rank 14th in the Majors in runs scored and their pitching ranks 5th in team ERA.

Ross Stripling (3-4 4.04 ERA) gets the call for the Boys in Blue tonight and in his last start he gave up 2 earned runs in 5 innings in a 5-4 loss to the Philadelphia Phillies. The Dodgers have dropped his last 2 starts.

Before Stripling’s last 2 starts, where he has given up 7 earned runs, he had only given up 2 earned runs in his previous 5 appearances some coming out of the bullpen.

Stripling’s first start of the season came against the Giants in San Francisco and while he had a solid outing going 7 innings and only giving up 1 earned run the bullpen did not help out in a 3-2 Dodgers loss.

The Dodgers have been playing well in the last few weeks and at the All Star break they were 6.5 games back of the Giants.

The Dodgers are a solid 40-24 at home this season.

Stripling will have another solid start facing the slumping Giants tonight and unlike his first start of the season he will lead the Dodgers to a W.

4* Free MLB Betting Pick: L.A. and OVER the Number

Don’t see a pitcher’s duel in this one like last night and the total in La La Land will go Over.

If you’re looking for more picks like this San Francisco Giants vs. L.A. Dodgers matchup we’ll be providing 4* free MLB plays on the blog all season long, and check out our Experts for guaranteed premium & free MLB Baseball picks!