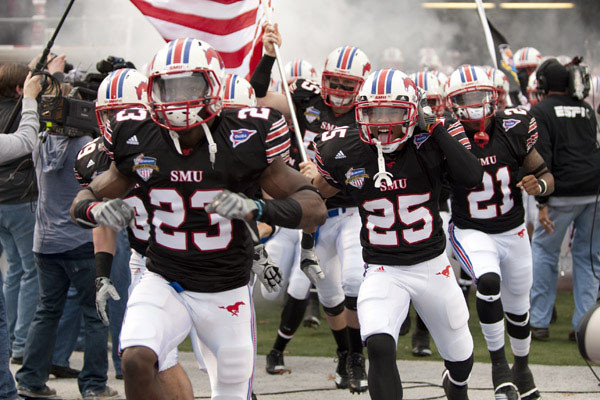 Looking for 2016 SMU Mustangs predictions? The SMU Mustangs only had two wins to show for last season, however, they did show some improvement over the 2014 season. They competed against the likes of the Baylor, TCU, James Madison, and Tulsa. Look for a couple of those games to go SMU’s way this year.

The SMU Mustangs strength is their offense. Senior quarterback Matt Davis is the engine that makes this power spread offense go. Davis is a decent thrower, but what makes him dangerous is his legs.

If Davis can stay healthy all season long SMU will win a couple of games and be in contention in a couple of more games, as well.

Sutton averaged 17.2 yards a pop with nine touchdowns including two against Baylor and he scored one against TCU along with going over 100 yards.

The SMU Mustangs scored 333 points last year and there is no reason to not expect that number to go up.

The SMU Mustangs gave up a whopping 548 points last year and that number will have to improve quite a bit if the Mustangs want to win a couple of extra games this season.

Luckily, for SMU, they should be better on defense and that number should improve. Junior defensive end Justin Lawler is back as he led the team in sacks last year.

Sophomore Jordan Wyatt and senior Horace Richardson are back in the secondary as they led the team in interceptions last year with two.

Plus, SMU recruited a few different linebackers and defensive linemen to help out the defense a little bit.

Delontae and Michael Scott have been talked up by Chad Morris and I’d look for players like Chris Biggurs and Jordon Williams to help shore up the defensive side of the ball.

The SMU Mustangs have a chance to start the season on a positive note as they take on the North Texas Mean Green, a team they beat last year.

They’ll have to go on the road this year, but that is a very winnable game. In fact, SMU could start the season 2-1. From there, things will start to get tricky.

They’ll lose to TCU and then going on the road against a couple of quality teams against Temple and Tulsa. After starting the season 2-1 at the halfway point expect SMU to be 2-4.

The second half of the season won’t be any easier, but they’ll have a couple of winnable games against Tulane and East Carolina on the road.

I would wager that they’ll win at least one of those games, winning both might be a bit of a stretch.

Overall, I believe SMU winning three games is a very realistic goal. Any less than that is a disappointment and four games is attainable, but I wouldn’t expect that and five wins is a stretch.

What do you think about our 2016 SMU Mustangs predictions? Please leave us a comment below telling us how you think they’ll do in 2016!