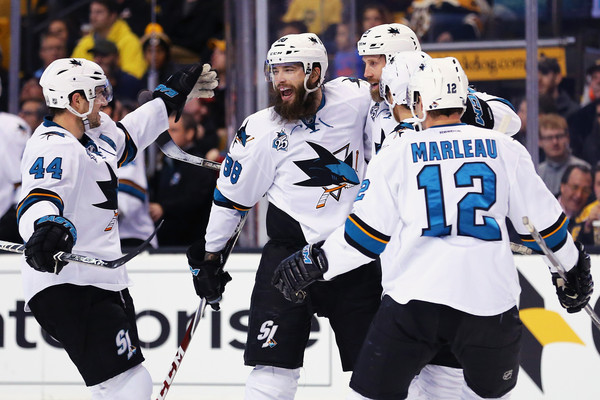 There is plenty of history and bad blood in this Western Conference first round playoff match-up. Two seasons ago, the Sharks went up three games to none in a series that LA clawed back to win four straight and despatch San Jose.

It’s taken the Sharks a long time to bounce back from that collective mental trauma, but the 2015-16 Sharks look pretty good, led by veteran Joe Thornton and multi-talented blueliner Brent Burns.

Thanks to great two-way play from Jumbo Joe and timely scoring from Joe Pavelski and alternate captain Logan Couture, the Sharks remarkably took both games on the road to start the series.

They head back north for Game 3 with a commanding 2-0 series lead to play in a frothing “Shark Tank” tonight. San Jose has also thrived because of workmanlike efforts from others like rookie Finn Joonas Donskoi and lunch-pail journeyman Joel Ward.

Also, much was made of the goaltending prior to the start of the series, but starter Martin Jones has proven himself more than up for the task, outplaying his former mentor Jonathan Quick to this point.

A late scrappy goal from the aged Vinny Lecavalier was the only thing that got in the way of Jones’s goose-egg in Game 2, in what ended up being a 2-1 San Jose victory on Saturday night.

Perhaps the Kings can take solace that they have not been playing up to their capabilities to this point. They haven’t been shooting accurately, which mitigates their net-crashing presence.

Lecavalier’s goal was a scrappy one scored on a rebound; L.A. must do more of that to create offense and make life more difficult for Jones.

When the Kings are constantly missing the net with shots, they tilt the ice in their opponent’s favor.

Quick has been solid, if unspectacular. It’s been LA’s lack of scoring punch that has been more concerning. The Kings need far better play from leader Anze Kopitar if they are to get back in this series.

Blueliner Alec Martinez is also listed as questionable for Game 3, with an undisclosed injury. Bottom line, it won’t be an easy next couple of games in the Bay Area.

I didn’t see San Jose taking both games in the City of Angels, and it gives the Sharks a commanding lead headed back to home ice.

Still, nothing can feel safe after their absolute implosion in 2014 (Coles notes: San Jose frittered away a 3-0 series lead and lost to the Kings in seven). San Jose must continue to take care of business in Games 3 and 4.

Thornton’s savvy two-way game is allowing the scorers on San Jose’s roster to do their thing. Paul Martin and Marc-Eduoard Vlasic is a veteran rear-guard and it all has helped along the dominance of Jones, whom Kings GM Dean Lombardi always knew showed huge promise. He’s delivering on that now.

With a win tonight, San Jose can further mimic the 2014 series; no doubt it would love the chance to right those historical wrongs. The Sharks will definitely keep pouring it on, but I just think the Kings are too battle-hardened not to up their game during these trying next couple of road contests. I see a tightly-fought battle in San Jose on Monday night.

If you’re looking for more picks like this LA Kings vs. San Jose Sharks matchup we’ll be providing 4* free NHL predictions on the blog during the entire Stanley Cup Playoffs, and check out our Experts for guaranteed premium & free NHL Hockey picks!

CappersPicks.com has Stanley Cup odds up on a ton of futures, and you will also find NHL lines up for early games as well.
[dfads params=’groups=218&limit=1&return_javascript=1′]