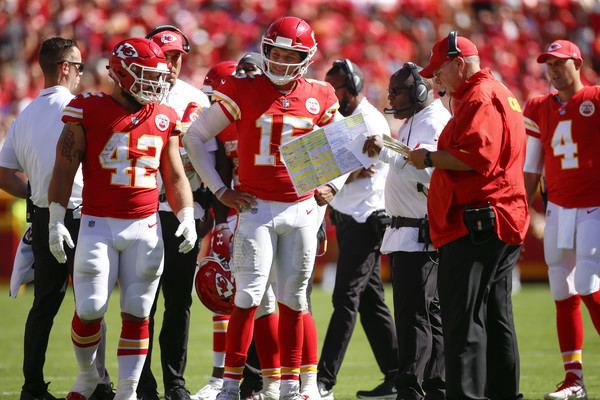 Ready to check out our 2020 Kansas City Chiefs Win Total Predictions? The Chiefs are in a great spot.  They just won the Super Bowl and have the best young quarterback, perhaps the best quarterback in the game. Repeating is never easy but it is clear the league is chasing Kansas City right now. They should be confident.

The offense definitely drives this team and they have done a great job keeping that group intact.  The skill players from a year ago are in place and there is no reason to expect much fall off when they have the ball.  Mahomes is young enough too that he could get better if that is possible.

The defense was good enough last season. Frank Clark was the big offseason pickup but it was Christopher Jones who led the team in sacks.  The tagged him to keep him under contract and it looks like the defensive line should be solid.

The rest of the defense is a little less certain which is why the Chiefs are no sure thing.

Repeating as champs is difficult but with Tom Brady no longer in New England it feels like it really opens up for a lot of teams.   Especially in the AFC where there is just one less annual hurdle. Kansas City is going to be a high price all season long though.

The offense does not need much help.  Henne is significant because it looks like he will be the backup to Mahomes.  That is a key role given his injury history.  Henne is reliable but not dynamic but would be getting the keys to a significant machine.

Seals-Jones is an interesting get.  Travis Kelce is one of the best in the league at the tight end position and commands a ton of attention as a result.  Seals-Jones was a hot prospect coming out of high school and Andy Reid might be the guy to unlock him.

The RB position is not a dominant one in the Chiefs offense.  Washington should get some run because the best thing he does is catch passes out of the backfield.

These were veteran reinforcement that did not provide a ton during their championship run.  Their absence will not seem to hold back the 2020 team that much.

Repeating as champions is always difficult and the dynamics of this offseason are not going to make it any easier.  How can it?

The good thing is that this team was already in good shape.  They have their offense the way they want it and are committed to it. They added a couple of lottery tickets there and there is no reason to expect any decrease in productivity.

Franchise tagging Christopher Jones might have been the biggest move of the offseason, tagging him to make sure they have their best defensive lineman as they try and repeat.

As I write this the Draft is tomorrow.  Kansas City is an interesting case in that they are drafting near the bottom but they also have a type of player that they really like.

Even though they would probably be best served by adding to their defense it would not surprise me if there is another offensive player they think it would be fun to have.

12 wins is a pretty lofty total, even for a team that just won the title and at times looks like they are playing at a different speed than their competition.  Key to that number would be a sweep of the AFC West, where no team finished last season with a winning record.

All the teams are in flux too; the Raiders are moving to Vegas; the Chargers are moving on from Philip Rivers and the Broncos seem nowhere near being competitive.  It looks very sweepable.

The other two division the Chiefs get are the AFC East and NFC South.  Tom Brady has moved from the former to the latter but neither groups looks all that intimidating.  New England is a wild card and the rest of its AFC East brethren could be modestly improved.

Down south the game between the Chiefs and Saints could be super fun but Tampa is no sure thing, even with Gronk in tow too.

2020 Kansas City Chiefs Predictions: 12 Wins & 1st in the AFC West (Bet Now at any of our reviewed NFL Sportsbooks!)

This number seems pretty spot on.  We don’t have the total schedule yet just a list of opponents but the Chiefs could be favoured in every game.  This team might score a ton of points but they are not going to completely dominate opponents every week.

12 wins seems right on the money so there is not much value there.

What do you think of our 2020 Kansas City Chiefs predictions? Comments are welcome below.