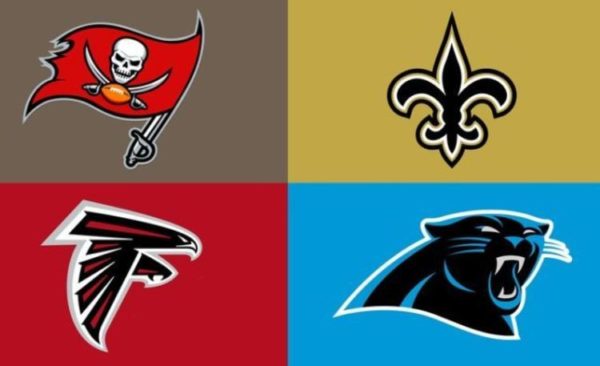 Looking for 2019 NFC South Predictions? With the preseason kicking off, now is the time to lock in your future bets. Divisional odds change every week throughout the season. Now is the chance to really steal some good odds and get yourself some value. Ready to bet on NFL Futures odds namely the NFC South teams’ lines? Click for updated odds on today’s games plus grab a 100% bonus up to $1000 now at MyBookie.ag.

The days of the NFC South flip-flopping champions and last place finishers are over, as the Saints have established themselves as the team to beat in the South. The division remains one of the deeper divisions in football, and should remain competitive once again this year.

After years of the NFC South being ripe for the taking year in and year out, the Bucs have quietly fallen behind the pack, and have their work cut out for them if they hope to compete with the division’s big dogs this year.

Last season’s Bucs squad was memorable for the magic Ryan Fitzpatrick brought to the team, and while his address remains in Florida, he’ll be playing in Miami this season. The job belongs to Jameis Winston, who the Bucs are hoping is in for his best season yet under new head coach Bruce Arians. With Breshad Perriman coming to town to join Mike Evans, Chris Godwin, and O.J. Howard, the weapons are there for Winston to find success.

The Falcons had enjoyed having one of the better offensive lines in football for years, but that group took a big step back last season, so the front office used both first-round picks on offensive linemen. That group should now get back to opening up holes for Devonta Freeman in what should be a bounce-back year.

Matt Ryan had a bounce back year of his own last season. The receiving duo of Julio Jones and Calvin Ridley should only improve in Ridley’s season year in the league. On the defensive side of things, safety Keanu Neal and linebacker Deion Jones both missed the majority of the 2018 season. They’ll need to stay on the field to keep that group afloat.

We’ve seen how good the Panthers can be when Cam Newton turns in an MVP-worthy season. When he’s at his best, there may be no more dominant player in football. But there are a lot of question marks around him now as he returns from shoulder surgery. If he can’t get the same zip on his passes, can he be the same Cam. And if he’s not the same Cam, can the rest of the Panthers pick him up?

On defense, the standout additions were Gerald McCoy and first-round pick Brian Burns. Both should help improve the team’s pass rush, which produced the sixth-fewest sacks in the league last season.

The Saints suffered a pair of devastating defeats in back-to-back playoffs. After they bounced back from the Stefon Diggs catch against Minnesota, you’d have to figure they’ll be able to re-focus following the terrible no-call on a blatant pass interference against the Rams.

The team subbed out Mark Ingram for a cheaper if less dynamic version in Latavius Murray to serve as the backup to Alvin Kamara, also adding Jared Cook as a new pass-catching option at tight end. Cameron Jordan and Michael Thomas each got new long-term contracts to keep them happy. The team’s ensuring they maximize this remaining window they have left with Drew Brees at the helm.

If we’re writing off the Bucs and assuming Cam’s going to be less than his best self, then we’re talking about the NFC South boiling down to a two-horse race between the Saints and Falcons. New Orleans has done all it can to show its in win-now mode to get Brees another ring, while the Falcons appear poised for a bounce back season and a return to the playoffs.

The Saints are the better team and can be considered when looking at NFC title odds and Super Bowl odds, there those does seem to be some good value in the Falcons at their current price, even if the Saints are the clear favorites.

What do you think about our 2019 NFC South Predictions? Please leave us a comment below telling us how you think they’ll do in the 2019-2020 NFL Season!