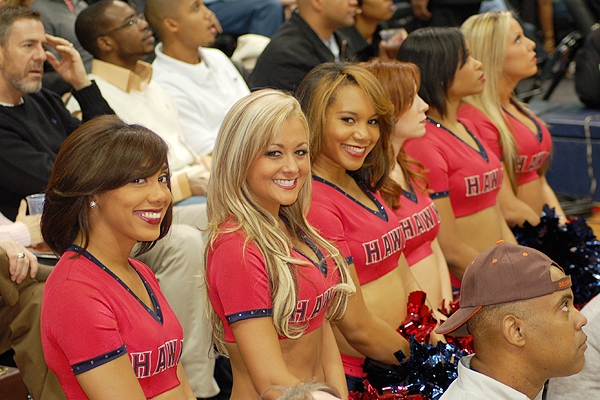 The Oklahoma City Thunder must be over the moon having Kevin Durant back in the lineup, as his presence continues to show the kind of elite squad the Thunder can be when the former No. 2 overall pick is able to stay healthy and keep his sneakers on the hardwood.

Meanwhile, the Thunder’s opponent on Monday night, the Atlanta Hawks, have struggled to put out a consistent effort on a nightly basis, and now look to hold serve on their home court at Philips Arena against one of the Western Conference’s top teams.

Durant’s numbers look quite similar, if not better, compared with the stats he put up during his MVP winning season of 2013-14. He’s shooting 47.1 percent from beyond the arc and 52.4 percent from the floor, putting up 28.4 points per game through 11 contests.

Since returning from a hamstring injury that kept him out of action for six games, Durant is averaging 30.3 points per game and knocking down 58.5 percent of his shots in three games – all Thunder wins. He put up 34 to go along with 13 rebounds as the Thunder won their fourth game in a row on Friday night, downing the Detroit Pistons 103-87.

The Hawks went up against the NBA’s top scoring defense on Saturday and fell 108-88, struggling to shoot the ball from deep. Atlanta hit on 6 of 26 attempts from beyond the arc, and the team’s 88 points matched its lowest output of the season.

The night before, the Hawks beat the Memphis Grizzlies by a score of 116-101. In that game, Atlanta shot 14 of 39 from 3-point range. Paul Millsap scored only eight points against the Spurs, but he’s been good of late, averaging 19.5 points and 10.3 rebounds per game over his last four contests.

The Thunder are 8-3 when Durant suits up this season, and unfortunately for the Hawks, they’re catching Oklahoma City at a time when it has Durant in the lineup, and not only that, but he’s been on fire since returning from an extended absence due to injury.

The Hawks have struggled with consistency this season, and this doesn’t appear to be an opponent in which they’ll be able to put up their best effort against. The Thunder are 19-7 ATS in the last 26 meetings, and 10-2 ATS in the last 12 meetings in Atlanta.