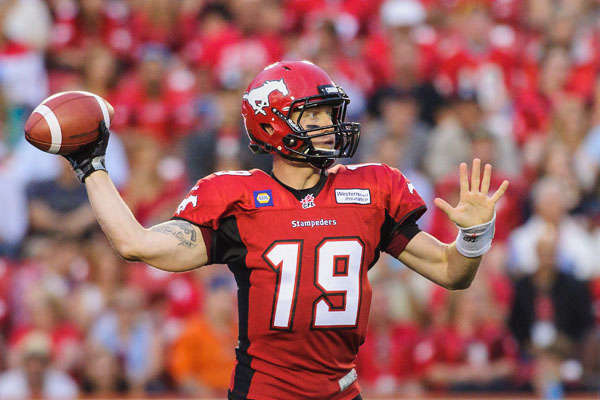 Two of the more consistent teams out of the gate get set for battle on Friday night when the BC Lions head into Calgary to take on the Stampeders.

A lot of things have gone right here in the early going for the Lions.

After winning back to back games to open the season, the Lions dropped a tough one to Toronto as their offense couldn’t get anything going. They responded in a big way, putting up a 40 spot in a 40-27 win over the Rough Riders last week.

One of those wins to start the season came against this Calgary team, in a 20-18 decision.

The Lions defense came up huge in that win, holding Calgary to under 300 yards of total offense. As a whole, the Lions defense has been extremely impressive. They really get into the backfield well and force the opposition to make quicker than normal decisions on passes or rushes.

Calgary has not lost since their opening weak defeat to the Lions.

A tie sandwiched in between a pair of wins has this Stampeders team feeling pretty good about themselves heading into this weeks matchup.

Like their counterparts, the defensive efforts have been huge, especially late in games. Calgary sits 2nd, right behind the Lions, in terms of points against by allowing just 21.5 per game.

Their weakness, which has certainly been exposed on many occasions, has been the pass defense. They sit near the bottom of the league, allowing 331.8 yards per game through the air.

QB Bo Levi Mitchell has a solid 8-2 touchdown to interception ratio, which has led to 28.2 points per game (3rd) for BC.

This Calgary offense feeds off the defense, meaning they get plenty of chances to be on the field and get set up on many occasions with good field position.

Defense will be the headliner for this one.

Ranked top 2 in points against, both defenses really allow no big plays. Look for the battle to be won with who can set up their offense with better field position, either via the turnover or forcing punts.

A lower scoring game here, with punters and kickers deciding this one.

If you’re looking for more picks like this BC Lions vs. Calgary Stampeders we’ll be providing 4* free Canadian Football plays on the blog all season long, and check out our Experts for guaranteed premium & free CFL Football picks!