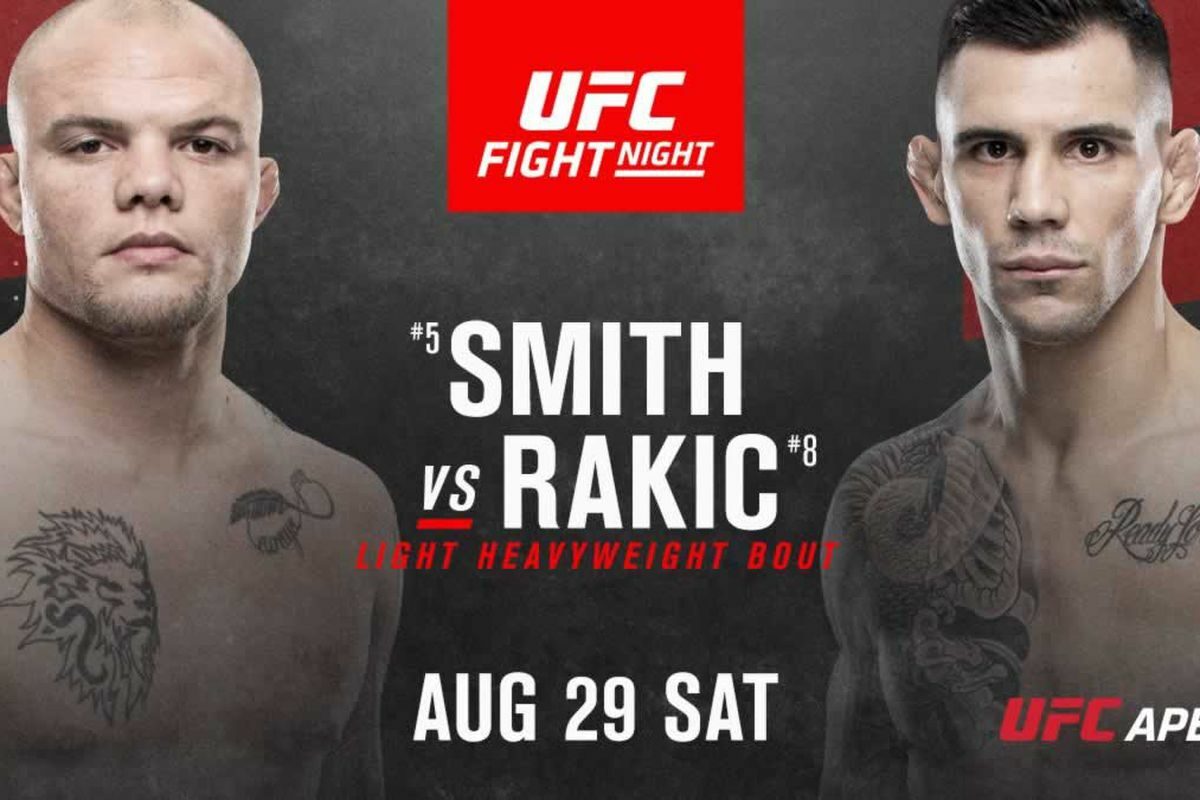 Ready for UFC Vegas 8 picks and betting odds & predictions? This UFC card will take place on Saturday, August 29th with a light heavyweight headliner between former title challenger Anthony Smith and newcomer Aleksander Rakic. This is where I usually acknowledge the bender streaks I have been on or the absymal performance of the previous weeks. I will acknowledge the latter here. Alike most cappers, UFC 252 and UFC Vegas 7 were not the best for the business of betting, but lets change those fortunes here.

Free UFC Apex Picks – While both Rakic and Smith are coming off losses, they both remain in the top 10 of the light heavyweight division and the winner is poised to make a run at the title with Jon Jones vacating his belt.

Rakic gained points in the UFC, especially in the 205 pound division, with his highlight reel knockout over Jimi Manuwa. After that, he was greeted with a very game Volkan, but lost a very narrow decision.

Anthony Smith beat Alexander Gustafsson as an underdog after his shortcomings at his first title shot. His most recent fight was surpising one, as many were chalking him in as a win against the ageless Glover Teixeira.

As for this fight, the odds are massively in favor of Rakic, which I necessarily do not agree with, especially in a 3-round main event. With the lines sitting at about +230 for Anthony Smith, all the value lies with him, but there is a really valuable prop that I think people need to keep an eye on. Smith and Rakic both are durable and have high levels of endurance. This fight to start the 3rd round is +100. I think that is a valuable bet, as is Anthony Smith.

Free UFC Apex Picks – This fight could genuinely go two ways. Lawler could overpower Magny, get in close, and finish him or just dominate a decision. The other outcome, which the oddsmakers seem to think is more likely, is Magny controlling his distance and dominating in the clinch, similar to what he did against Rocco Martin.

I do not think someone with as much knockout power as Lawler should be more than a 2 level underdog. I am not underestimating Magny, but I think the oddsmakers are underestimating Lawler. This a lean, and a fun one at that, but I will take Lawler.

The public backing behind Alexa Grasso scares me, because as we saw in the past two weekend, big favorites and public backings do not always translate. With that being said, I love Grasso at 115 pounds, but I think her boxing will translate well to the 125 pound division.

Free UFC Apex Picks – Nothing against Alego, but Lamas vs. Hall would have been an unbelievable fight, in which I actually favored the underdog Hall. The fight was pulled, which I think is beneficial to Lamas. He will be able to establish more of a standing presence against Alego than against Hall.

This has a “people’s main event” feeling to it. Many people want to see this fight again and after a few re-bookings and cancellations, we finally will watch this dance yet again. I do not agree with how lopsided the odds are as Cutelaba is too big of an underdog, but Ankalaev should pull out the win here, nevertheless.

Impa is an unproven hype train. Pitolo is heading into his 20th professional fight. This pick feels like a trap, but as always, be advised.

I wouldn’t bet this fight with your money.

Not a fan of this fight, either. Just a lean.

Rizz’s Longshot Parlay of the Week