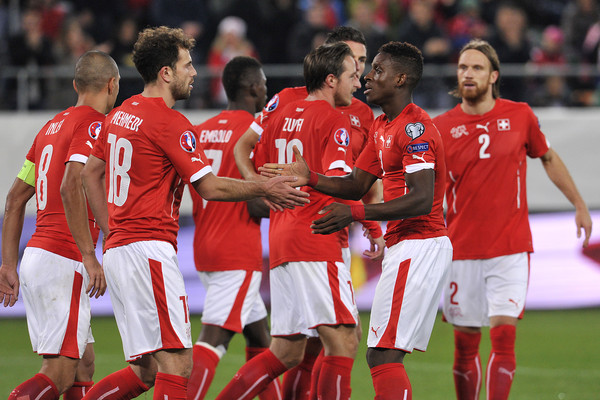 With the group stage complete the Euro begins for real on Saturday. This match kicks off the knockout round and if you look at the odds it should be a fairly event contest.

The one thing that might separate these two teams is Robert Lewandowski of Poland, he is that next level player whose mere presence on the pitch can make things happen.

Everybody knows that but lets see how it plays out.

It was no surprise that Switzerlanf qualified out of Group A, behind only host France. They did not lose in the group stage, allowing just one goal over the three games.

They only scored a couple themselves making this match a bit of a contrast in styles. Switzerland is content to play a defensive style of football, while Poland is more likely to be the aggressor.

The Swiss finished the group stage among statistical leaders with a 91% pass completion percentage (3rd) and 58% possession (4th). They will look to maintain those figured but must also find a way to attack.

These nations played to a 2-2 draw about a couple of years ago. The Swiss are underdogs on Saturday but they definitely have a chance.

Poland is also not a surprise qualifier to the knockout stage. What might have been a surprise is that they were able to draw with Germany and essentially match them with 2-0-1 records in Group C (losing on goal differential).

The Poles were one of handful of teams that did not allow any goals during the group stage. This was a bit surprising because their style is usually a bit more wide open. They only scored twice.

Logic tells us that for Poland to advance they have to get more from Lewandoski. He has only had one real scoring attempt in the three games thus far. Thankfully the likes of Arkadiusz Milik have stepped up.

Poland is an interesting bet from here on out. There is probably more talent there than most realize and they can definitely advance to the next round

The Swiss have a pretty good payout here. They are a tough squad to back because of their lack of goal scoring potential. Even if they are successful at drawing during regulation winning on penalties would be tough for them.

I think Poland will look to come out fast on in this one, get a lead and then slow down the pace. Look for them to get Lewandoski in some good spots early. That first goal is always key.

The Swiss are capable and their win has the biggest payoff but I think for them to do would mean that they are going to have to get that first goal and I don’t see it. They are better at subduing teams than forcing the action.

Poland is only +160. I know that looks low but I believe that is the second best payout for a favourite at this stage of the tournament. That is not why you should bet it but it makes it a very good value.

If you’re looking for more picks like this Switzerland vs. Poland we’ll be providing 4* free Euro 2016 plays on the blog all Tournament long, and check out our Experts for guaranteed premium & free Euro 2016 picks!