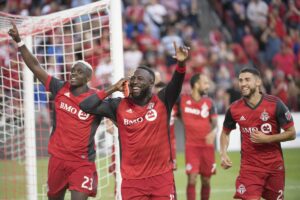 New York City FC and Toronto FC face off on Sunday in an MLS showdown at Citi Field in New York City. When these two teams faced off on April 2nd it was Toronto that came away with the 2-1 victory.

New York City comes into this game sitting in 10th place in the Eastern Conference having picked up seven points. New York City has been a bit inconsistent this season but they are coming off quite the win in their last game. The offense scored six goals against Real Salt Lake and that was enough for the blowout victory. Valentin Castellanos scored four goals including two from the penalty spot.

On the season New York City has scored 11 goals while they have given up six. The strength of this team has been the defense and before that last win, the offense hadn’t actually been all that good.

Castellanos has those four goals, but Thiago has also been good scoring three goals. In this game the offense is going to need to be good.

On the other side of this matchup is Toronto FC who sits in 5th place in the standings having picked up 11 points. Toronto has picked up at least one point in each of hte last four games. In the last game against Philadelphia, Toronto scored two oals and secured the victory.

On the season Toronto has scored 11 goals while the defense has given up 12 goals. They are averaging 1.57 goals per game while giving up 1.71 goals per game. The top player has been Jesus Jiminez and he has scored four goals and one assist.

Toronto’s defense has been an issue, but they have been scoring, and that will continue in this game. I expect both teams to score at least two goals and that will lead to this game going over the total. Back the over.

If you’re looking for more picks and tips like this New York City FC vs. Toronto FC matchup we’ll be providing 4* free MLS betting tips on the blog all season long, and check out our Experts for guaranteed premium & free MLS picks!