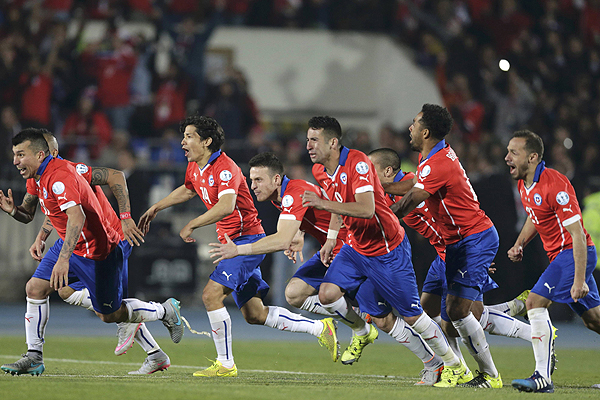 Two teams who know about winning tournaments meet on Saturday in the quarterfinals as Mexico and Chile meet.

Mexico is the defending champions of the Gold Cup, while Chile is trying to defend their Copa America title.

Mexico took Group C thanks to a hefty goal differential over Venezuela. After getting an equalizer late in a 1-1 draw against them in the final game, Mexico earned themselves a date here, instead against Argentina.

Mexico has become much more of a threat in terms of goal scoring lately as they don’t sit back anymore like they used too.

There could also be history made here in this match. Javier “Chicharito” Hernandez sits just 1 goal away from tying Jared Borgetti’s goal line atop the Mexican scoring list.

This will be the kind of game that will favor Mexico. This should be pretty open as both teams do like to attack, which will turn into some counter attacks.

Mexico will try to get the ball out wide and find some gaps in the back 4 of Chile inside the 18 yard box, which has been the recipe to success through group play.

Chile had their chance to grab the top spot in the group, but couldn’t figure things out against Argentina in their 2nd game of group play in a 2-1 defeat.

Chile has been concerning on the defensive end all tournament long. They failed to record a clean sheet in any of their 3 games, allowing 5 goals total, which is high for them.

In their final game, they took down Panama, but did allow 2 goals.

With Mexico having so many threats up front, this could poise as a problem for the Chile back line.

Maintaining possession and not allowing any through balls will be a huge key. If this defense gets stretched, things could get ugly.

These two teams play similar styles, which could cause sort of a stalemate.

Expect a lot of possession here early in this one, as both teams kind of feel each other out.

Both goalkeepers are tough to get past. Despite Chile’s struggles in group play, this back line will stand tall here, as neither team wants to concede and give that momentum up.

With that, don’t expect either Mexico or Chile to be aggressive early.

If you’re looking for more picks like this Mexico vs. Chile? We’ll be providing 4* free Copa America plays on the blog all Tournament long, and check out our Experts for guaranteed premium & free Euro 2016 picks!