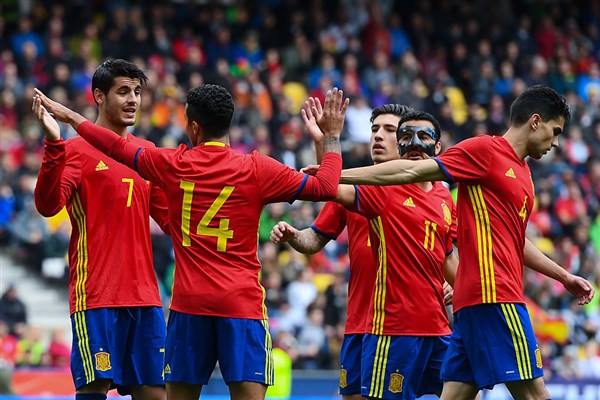 Both teams have clinched a spot in the next round, but seeding can still be determined as neither team has a defeat on their record as yet.

A popular dark horse pick heading into the tournament, Croatia has shown that they have a squad that can do some damage and make a run at the later rounds of this tournament.

By all accounts this team should be sitting on six points after a pretty routine 1-0 victory over Turkey, but dropped two points late against the Czech Republic in a 2-2 draw where the Czechs drew level on a controversial PK in the 93rd minute.

This team is loaded with talent in the midfield and may in fact bolster one of the three best midfield groups in this tournament with La Liga duo Luka Modric (Real Madrid), and Barcelona’s Ivan Rakitic,  playing with a Serie A trio made up of Inter’s Ivan Perisic and Marcelo Brozovic, and Fiorentina’s Milan Badelj.

That group is a healthy balance of skill and work rate and don’t give up too many cheap opportunities.

An aging Mario Mandzukic is not the poacher he once was but his size and ability in the air will test a Spanish back line where Gerard Pique is the lone man who stands more than 6 foot tall.

The champs have bounced back extremely well from a disappointing World Cup in 2014 where they failed to get out of the group stage.

Their Euro Cup defense is looking like a realistic possibility as they’ve looked one of the best sides in the tournament thus far.

Spain absolutely overwhelmed Turkey in a 3-0 thrashing that could have been much more lopsided. Juventus striker Alvaro Morata struck twice for the Spaniards while Nolito added one of his own.

This Spain team is loaded with talent and the midfield trio of Sergio Busquets, Andres Iniesta and Cesc Fabregas are arguably the best in the tournament if not one of the best in the world as far as national teams go.

This team will always control the bulk of possession, but breaking down a resolute Croatian defence will be no small task.

Spain are firmly in the driver’s seat to take Group D with a draw. Look for them to dictate the pace and possession in this game without taking any unnecessary risks.

The price on a draw is tough to pass up on this one, especially in a game where neither team is in a must win situation. Shared points will suit both sides and have them finish one and two (1: Spain, 2: Croatia) in the group.

If you’re looking for more picks like this Craotia vs. Spain we’ll be providing 4* free Euro 2016 plays on the blog all Tournament long, and check out our Experts for guaranteed premium & free Euro 2016 picks!