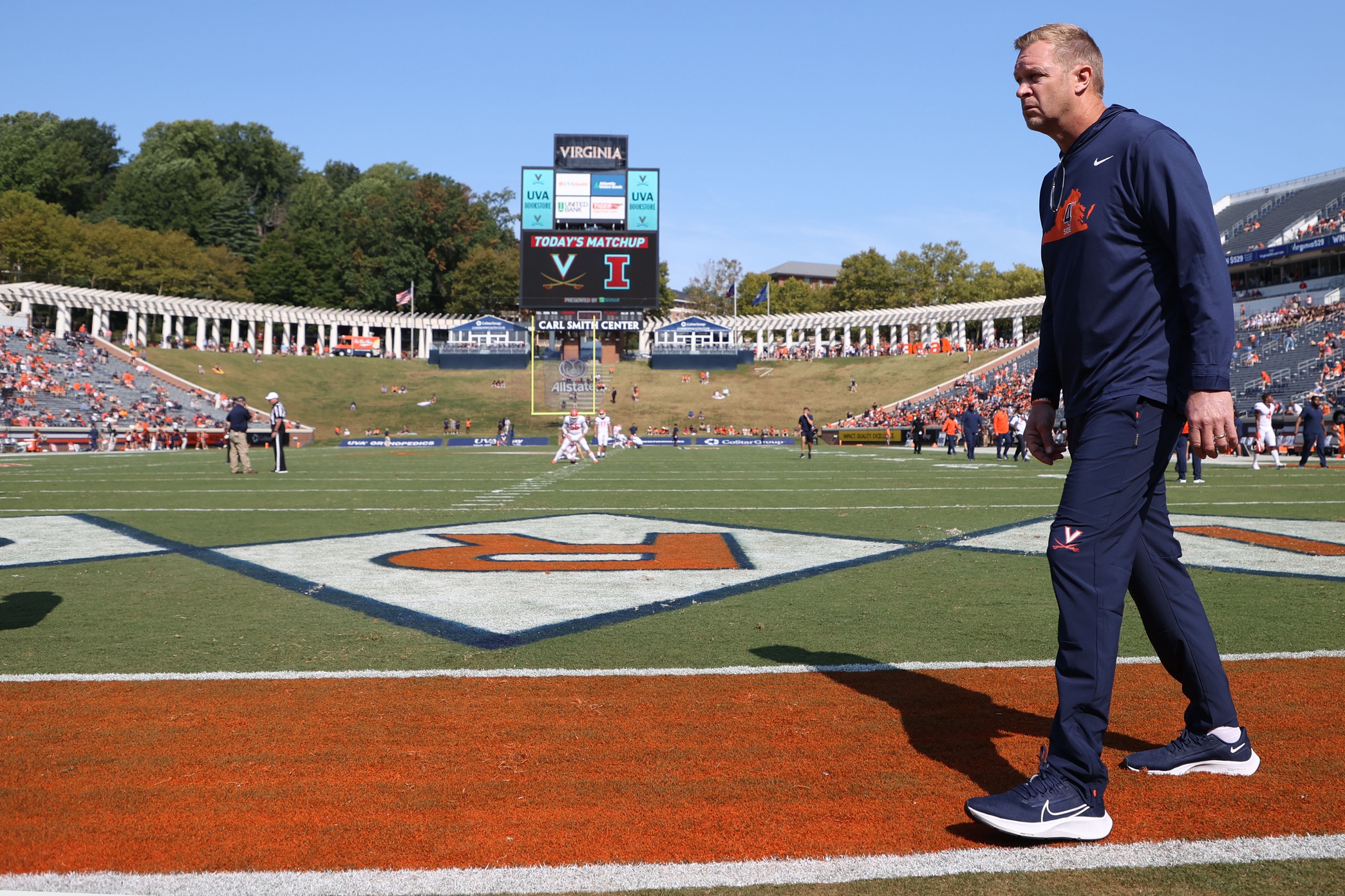 The Virginia Cavaliers will begin their toughest stretch of the season when they travel to LaVell Edwards to take on the BYU Cougars. Both teams are coming off of their sixth wins of the season, but this non-conference battle will headline current UVA and former BYU head coach Bronco Mendenhall’s return to Provo.

Mendenhall posted a 99-43 record at BYU, and led them to six bowl wins over an eleven-year span. He’s in his sixth year at the helm at UVA, and he has them within striking distance of an ACC title. He defeated UVA twice in 2013 and 2014 as the Cougars head man.

BYU is favored by 3 points at home here.

Virginia ripped off their of fourth straight win last weekend to improve to 6-2. The Cavaliers took an eight-point lead into the locker room, and held off a late rally from the Yellow Jackets to pick up the win, 48-40.

Brennan Armstrong added to his Heisman plea with his best performance of the season last weekend. The junior quarterback performed flawlessly, going 29-43 for 396 passing yards with four touchdowns. He also scored twice on the ground, and gained 95 rushing yards, marking the highest total for a Wahoo this season.

Armstrong is up to 3,220 passing yards with 23 passing touchdowns and five rushing scores on the season.

UVA has a deep arsenal of skill players and a vaunted passing attack this season. Dontayvion Wicks leads the team in receiving with 847 yards and 8 touchdowns after another big performance last weekend. Billy Kemp IV has been very steady out of the slot and leads the team in catches (57), while gaining 541 yards and catching five touchdowns.

Swiss-army knife Keytaon Thompson is one of the most versatile players in the country. He’s caught 41 passes, and gained 748 yards from scrimmage (555 rec, 197 rush) this season. Wayne Taulapapa leads the team in scoring with 258 rushing yards and two scores.

BYU responded to two straight losses with a win in Spokane last weekend over Washington State. The contest went into the locker room knotted up a 7, and a failed two-point conversion from Washington State would lead to a 21-19 win for BYU, giving them their second straight Cougar Classic victory.

The Cougars now enter the final stretch of the season with this being their toughest task left.

Jaren Hall had another solid start against Washington State. The sophomore quarterback protected the football and made the timely throws on the road he needed to, going 15-20 for 143 passing yards. It was his first game without a touchdown toss, but the dual threat qb has played well at home this season.

Hall has thrown for 1,348 passing yards with nine touchdowns to three interceptions, while rushing for 205 yards and a score this season.

Tyler Allgeier is the focal point of the BYU offense, and he’s coming off of arguably the best performance of his college career. The sophomore back ran for a career-high 191 yards on 32 carries, and he scored twice. He’s up to 856 rushing yards and 11 touchdowns for the season, and both rank in the top-10 nationally.

BYU has a solid duo at wideout in Neil Pau’u and Gunner Romney. Romney led the team in receiving last year, and he’s on pace to do so again this season, pacing the Cougars with 452 receiving yards. Pau’u has is up to 37 catches, 439 yards and four scores for the season.

There’s nothing like late season non-conference football. This contest will be the ultimate battle of grit versus finesse, and when you tack in Bronco’s return to BYU, it might be a spot to take a chance in.

Virginia has the offense to win this game in what should be a hostile location. BYU’s run attack will surely slow the pace down, but both teams may have a hard time stopping each other. The Cougars may be in trouble if they fall behind and have to play catch up, as we saw in their loss to Baylor. This should be an emotional night for Bronco Mendenhall and it could end well if the UVA aerial attack can stretch the field early and often.

Take the Cavaliers ML, and monitor the over of 64.

If you’re looking for more picks like this Virginia Cavaliers vs. BYU Cougars matchup we’ll be providing 4* free College football game predictions on the blog all season long, and check out our Experts for guaranteed premium & free CFB Football picks!