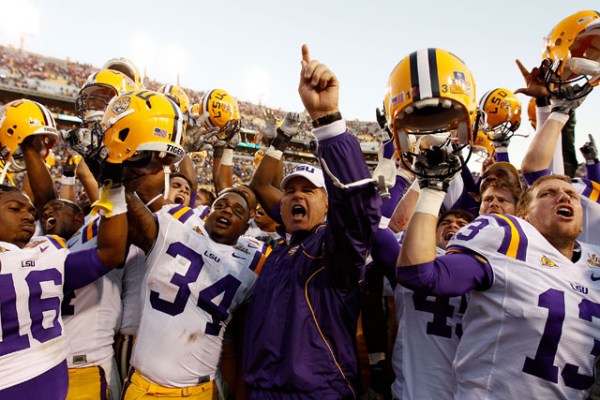 Apparently, the Sports Illustrated “Cover Curse” is alive and well. Shortly after superstar Tigers RB Leonard Fournette appeared on the magazine’s front spread, his LSU squad became mired in a three-game losing streak. LSU, once looking like an elite program in the country, are now relatively limping along at 7-3.

The high-flying A&M offense looks to take advantage of that, as the Aggies travel to the nuthouse that is Death Valley to do battle with the Tigers on Saturday night. Texas A&M have shown that there is live after Johnny Manziel, a road win would cement that perception even more in the ultra-competitive SEC West division.

In order for LSU to be successful and the Tigers to turn around this slide, Fournette needs to re-establish himself as the dominant force he was in the first half of the season.

At the time of SI’s publication, Fournette was a Bo Jackson-like force that couldn’t be contained by opposing defenses. Once Alabama’s defense stopped him in his tracks a few weeks ago, it hasn’t quite been the same story.

LSU’s passing attack won’t instill fear in anyone, so Fournette must be on the money if LSU is to have a fearsome offense.

LSU has always featured an athletic, mobile defense accentuated by their talent in the secondary, but there have been shown to be chinks in that armor that ’Bama and Arkansas have exposed. Thus, the Tigers controlling the ball on Saturday night will be critical.

When the Aggies win, they score a truckload of points. Though A&M are only in the middle of the road of the SEC West, with a 4-3 conference record, the Aggies have an upper-tier offense thanks to QB Kyle Allen, a sophomore who has eclipsed 2,000 yards passing and thrown 16 TDs to six INTs.

He is buttressed by RB Tra Carson, a 240-lb senior who is closing in on 1,000 yards rushing to go with his six majors.

The talent at the skill positions (not to mention A&M pumps out NFL prospects on the offensive line, including Cedric Ogbuehi and virtually everyone in the dynastic Matthews family) makes the job easier for underclassman Allen at pivot.

Sure, Manziel brought that element of improvisation, which made it thrilling watch games in College Station, but the Aggies are proving they’re a) not a one-trick pony; and b) a competent program in a premier conference. Aggies’ defensive co-ordinator John Chavis, who previously held that title with this weekend’s opponent, is trying to get A&M’s house in order on that side of the ball.

The rumors have been swirling about the departure of longtime head coach Les Miles, as LSU’s athletic department might think it is time for a fresh voice in the locker room and on the sideline.

The Tigers have an excellent ground game thanks to their star, but the passing game is atrocious and the defense is not as stout as its reputation suggests.

Fournette has 1,582 rush yards and 16 TDs – a Heisman-worthy campaign, to be sure. Ever since Fournette ran all over Notre Dame in last year’s bowl game in Nashville.

A big home game to close out the year against a football team that is steadily poaching Louisiana high school prospects – long solely the territory of LSU – should have Miles’s young men fired up.

I expect a grinding running game and a hit-you-in-the-mouth approach from the Tigers, which will lead to clock management that should somewhat nullify A&M’s quick-strike attack.

Expect LSU’s dynamic, 230lb sophomore, an almost mystical blend of power and speed, to dictate the terms in Baton Rouge this weekend.