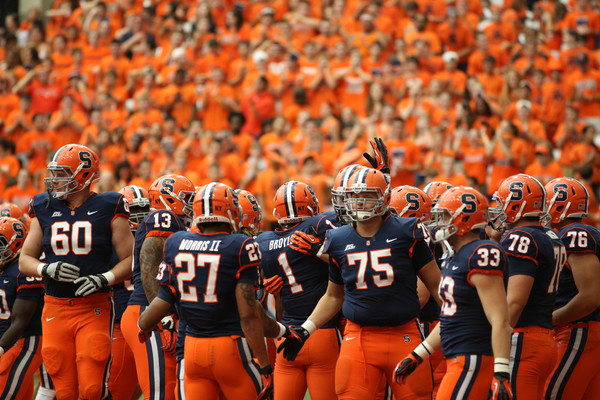 Looking for 2016 Syracuse Orange predictions? Syracuse, with its fairly low enrolment and affinity for basketball, is usually on the bottom of the Atlantic Coast Conference looking up. This season shouldn’t be any different. The Orange have difficulty attracting the top recruits that the elite ACC programs routinely snag.

Syracuse only achieved four wins in 2015, it might be an achievement to match that mark this season.

It sure speaks to a rebuilding year that perhaps the biggest strength on this team is the new head coach.

Coach Babers did a phenomenal job guiding an FCS Eastern Illinois program that was in dire straits to an 18-9 record and consecutive playoff berths.

He then took over at Bowling Green and used his QB whispering ability to turn BGSU pivot Matt Johnson into the second coming of Peyton Manning. Orange incumbent QB Eric Dungey has to feel hopeful about that track record.

Babers is a no-nonsense type of guy that will not accept excuses from people.

One of the few notable strong points on this team is the WR corps, which is also promising for Dungey.

Syracuse returns its leading three receivers from 2015, with junior Steve Ishmael being the gem of the group. The receiving numbers should go up with another year of experience for sophomore Dungey and Coach Babers’ ability to get the most out of a passing attack.

‘Cuse also has a good special teams unit, even after losing P Riley Dixon to the NFL. Elusive Brisly Estime is a solid punt returner and long snapper Matt Keller is as steady as they come.

Junior kicker Cole Murphy was 13-for-16 on his field goals last year. If redshirt frosh Sterling Hofrichter can halfway fill Dixon’s shoes, that unit will be a bright spot for the talent-deficient Orange.

There’s a number of them, but Syracuse’s biggest disadvantage is playing with marginally talented offensive and defensive lines.

These units are so crucial to success on both sides of the ball, and the Orange are overwhelmed at the point of attack too often.

Syracuse has three new starters on both the O and D-lines and some of the existing players were recruited to play different systems. It could be a hot mess, frankly.

Syracuse had an awful defensive back seven last year; the secondary finished ranked #106 in the FBS.

Further to this, the LBs and DBs and have adapt to the Tampa-2 defense employed by defensive co-ordinator Brian Ward, who came over with Babers from Bowling Green.

Both of these units return all their starters from last year, but when they were so dire, that might not be a good thing.

Babers has a good track record of turning programs around, but this isn’t an overnight fix. It is fair to say that it’s a rebuilding season in upstate New York.

Ten of 12 of Syracuse’s games this season are played against teams that were in bowl games in 2015. The Orange have a cupcake against Colgate to open the season, but after that, ‘Cuse could be in dogfights for the duration.

The Orange also draw Notre Dame in non-conference play. Coach Babers should get the most out of his QB, and the coaching staff must start laying the groundwork on the recruiting trail, grabbing the type of personnel that fits their system.

Expect some bumps and bruises along the way.

What do you think about our 2016 Syracuse Orange predictions? Please leave us a comment below telling us how you think they’ll do in 2016!