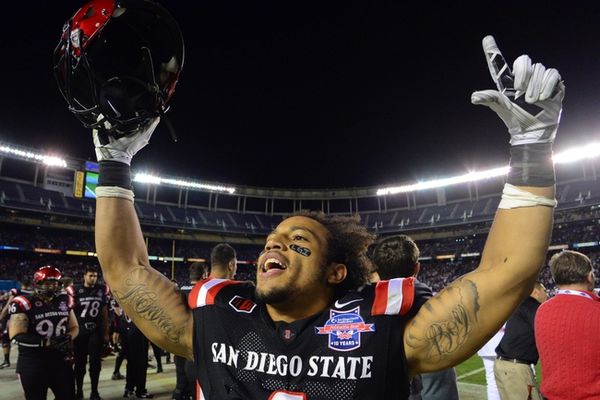 a red hot San Diego State team already will be in a solid bowl game and as the winner of the Mountain Division of the MWC they will face Air Force in the conference title game.

After a tough start to the season the Aztecs have won 7 straight games and not only that, but they have covered the spread in all of those games as well.

Nevada became bowl eligible with their 2nd half 3-game winning streak, which was snapped in their last game. However, those wins all came against teams that are currently under .500, so it is no surprise they are a big 17.5-point road underdog.

These are the 2 guys the Aztecs really have to worry about.

While QB Tyler Stewart has not put up big numbers this season he does have 2 WR’s that have over 600 yards.

San Diego State ranks 17th in the nation in pass defense and 5th in run defense, so the Wolfpack have their work cut out for them on offense.

SDSU’s big gun on offense is RB Donnel Pumphrey, who has rushed for at least 120 yards in 7 straight games.

Chase Price also has 777 rushing yards and this duo will be facing a Nevada run defense that ranks 78th in the nation. In the loss to Utah State the Wolfpack gave up over 200 rushing yards.

QB Maxwell Smith does not have over 200 yards passing in any game this season, but he has a decent WR corps, has 13 TD, and has not been picked off since the 2nd week of the season.

Last season at Nevada the Wolf Pack beat the Aztecs 30-14.

I have to go with the hot Aztecs in this one, as they will ride their rushing offense to win the win and they will cover as well.

The Aztecs will head into the MWC title game on fore winning 8 straight after beating Nevada in their season finale.