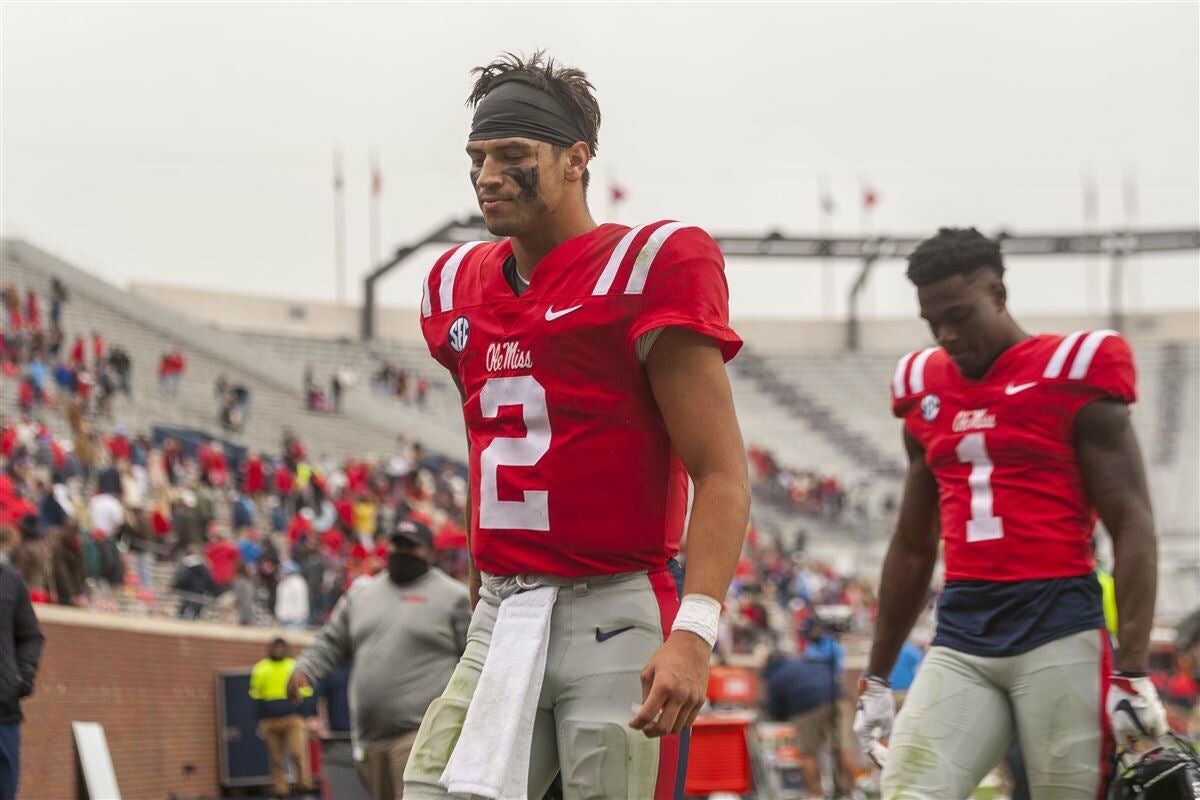 High-powered offenses will square off on Saturday afternoon in Oxford when the Liberty Flames take on the No. 15 Ole Miss Rebels at Vaught-Hemingway Stadium.

Liberty enters the weekend at 7-2 overall for the season after rolling to a 62-17 home win over the UMass Minutemen as a 35.5-point home favorite last Saturday.

This is the first-ever meeting between these two teams as Liberty head coach Hugh Freeze returns to his former school after being dismissed from Ole Miss in 2016. The Flames have only played an SEC team once in program history, a 53-0 loss at Auburn in 2018.

This matchup will be a battle of two of the best quarterbacks in the country between Malik Willis and Matt Corral. Both are expected to be top picks in the upcoming draft.

After a couple of shaky performances in prior games, the Flames came out of the gate fast last weekend to put away an overmatched UMass team early.

T.J. Green scored on a 26-yard run just 14 seconds into the game with DJ Stubbs and Demario Douglas adding touchdown receptions in the first quarter, and it was a 41-3 game by halftime alone as Noah Frith and Johnny Huntley also found the end zone.

Three different Liberty quarterbacks had a touchdown pass, with star Malik Willis leading the way by going 19/27 for 307 yards and four touchdowns while adding 37 yards on the ground. Green piled up 60 yards and 2 touchdowns on just 5 carries, while Stubbs finished as the top receiver with 2 catches for 72 yards and a long score.

The Flames have a top 20 offense in just about any stat with an average of 37.4 points and 444.8 yards per game this season. Liberty’s defense is also 13th nationally in scoring, with opponents putting up just 17.8 points and 300.0 yards per contest.

Willis has been one of college football’s best quarterbacks while also generating plenty of NFL Draft buzz, completing 140 of his 210 pass attempts for 1,986 yards, 21 touchdowns and 6 interceptions in addition to leading the Flames in rushing with 126 carries for 684 yards and 9 scores.

Douglas has piled up 37 receptions for 562 yards and five touchdowns, while CJ Daniels is also having a big receiving season with 26 catches for 456 yards and 7 touchdowns.

It’s been an outstanding season for the Rebels overall, but they will be a lamenting a few missed opportunities in last Saturday’s hard-hitting game at Auburn that dropped them into third place in the SEC West. Ole Miss couldn’t overcome a 28-17 halftime deficit and lost the game 31-20.

Corral missed some time in the second quarter with an ankle problem but returned, completing 21/37 passes for 289 yards and an interception overall while adding 10 carries for 45 yards and a touchdown. Jahcour Pearson had a huge game with 7 catches for 135 yards, while Casey Kelley added 81 yards on 7 receptions.

The Rebels have one of the most potent offenses in college football, ranking 12th in scoring with an average of 39.1 points per game while piling up 531.4 yards per contest, 4th-best in the nation. Ole Miss’ defense has shown a lot of improvement but is still below average with 28.6 points and 429.6 yards per game allowed.

Corral is in the Heisman Trophy discussion, having completed 161 of 244 pass attempts for 2,022 yards, 15 touchdowns and 2 interceptions while adding a team-high 519 rushing yards and 10 touchdowns on 110 carries.

Conner is also having a prolific season with 77 carries for 434 yards and 10 touchdowns, while Dontario Drummond is the top receiver for the Rebels with 40 catches for 658 yards and 6 scores.

While Liberty won’t be a pushover this game, the Flames just don’t play teams with the talent level of Ole Miss very often and the excellent Willis won’t get enough support from the rest of the roster to keep up here.

Road losses to Alabama and Auburn are nothing to be ashamed of for the Rebels, and they should be closer to a two touchdown favorite considering the mismatch of one of the nation’s best quarterbacks in Corral going up against the Liberty defense.

The Ole Miss offense is in a different league than anyone the Flames have faced this season with an average of 6.7 yards per play to rank top 10 nationally, as it features great balance with a strong run game to go along with a Heisman contending quarterback in Corral.

I’m taking Lane Kiffin and Rebels to cover at home in an exciting game.

If you’re looking for more picks like this Liberty Flames vs. Ole Miss Rebels matchup we’ll be providing 4* free College football game predictions on the blog all season long, and check out our Experts for guaranteed premium & free CFB Football picks!