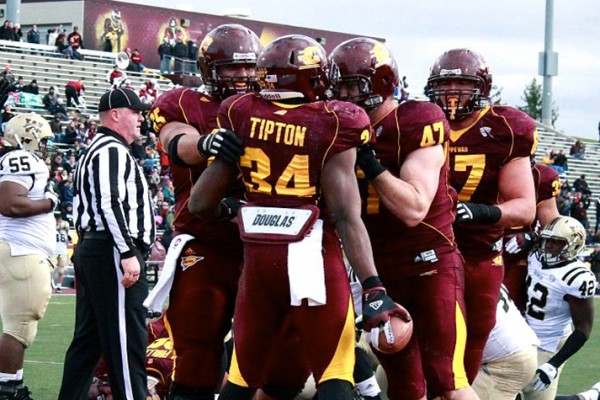 Central Michigan looks to grab win number 7 on the season, which could be a pivotal one, as they welcome in the Eastern Michigan Eagles on Friday.

Central Michigan has become bowl eligible with their win over Kent State last week, but 6 wins doesn’t guarantee anything, especially with a lot of 6 wins teams out there.

Eastern Michigan lived at the bottom of the MAC all season long and will try to pull off an epic upset to get win #2.

The Eagles season will certainly be one to forget. Eastern Michigan’s lone win came against Wyoming at beginning of the season as they’ve dropped 9 straight since then.

The Eagles haven’t actually been all that bad offensively, but their defense has let them down time and time again.

Eastern Michigan is allowing 42.7 points per game on the season and allowing opponents to rack up 513.5 yards per game. That is quite the recipe for disaster.

Offensively though, they rank 76th overall as they put up 385.5 yards per contest. They are one of the more balanced teams in the MAC with 219.5 pass yards per game and 166.0 rush yards per game.

Leading the charge through the air is QB Brogan Roback. The Sophomore has 14 touchdowns to his credit this season, but has struggled with ball security. Roback has thrown 11 interceptions to those 14 touchdowns.

Expect the Eagles to really pull out all the stops here as they look for the giant upset to finish off the season.

The Chips are bowl eligible, but a 7th win would go a long way in solidifying their spot in a postseason game.

Central Michigan became bowl eligible last week with their win over Kent State 27-10 in Kent. The Chips have won 4 of their last 5 to propel themselves into the 6 win plateau with the lone loss against Toledo mixed in there.

Central Michigan did have their chance at the MAC West this season too. They knocked off NIU (who sits tied for first for the time being,) but fell to Toledo and Western Michigan. Had they beaten Toledo, things would set up totally different for this game.

The Chippewas have nothing to hang their heads about though. This team was solid on both sides of the ball, but the defense especially stepped up when they needed to. CMU allowed just 21.5 points per game on the year.

That number even goes down at home as they allow 19.0 as they went 4-1 ATS inside their home stadium this season.

The Chippewas are just simply too good in this spot. Even at 24, this spread is too low. Eastern Michigan can’t stop anybody and will even struggle against a strong CMU defense.

The Chippewas cruise to their 7th win on the season in a route over Eastern on Friday.