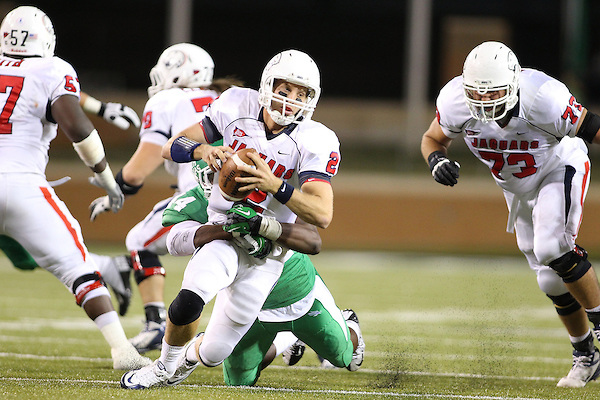 Tuesday night College Football returns this season with a Sun Belt clash as the Arkansas State Red Wolves travel to Southern Alabama to take on the Jaguars.

This contest is crucial for both as they currently sit 1-0 in what expects to be a crammed top of the standings come the end of the season.

Last season Arkansas State handed it to Southern Alabama 45-10 as the Jaguars will look for a bit of revenge coming into this one.

The Red Wolves’ fans got a solid celebration as they knocked off Idaho on homecoming 49-35. The win pushed Arkansas State to a 2-3 record and gave them a 1-0 start to the Sun Belt slate.

The Red Wolves continue to try and find some stability and consistency on both sides of the ball.

Arkansas State has been blown out by USC and Toledo, both on the road. They competed, but fell short against Missouri and knocked off FCS Missouri State and Idaho. The main thing the Red Wolves need to look at is how good of a schedule they played. While they sit under .500, they’ve played 3 opponents that were all expected to be losses.

Freshman QB James Tabary took over the calling the shots when Fredi Knighten continued to struggle with his hamstring injury.

Tabary had his best game against FCS opponent Missouri State as he tossed 255 yards and 3 touchdowns.

The Jaguars bring in a 3-2 record, but like their opponent, they hope to find some consistency themselves.

Southern Alabama struggled against FCS Garden Webb, but do have a nice win to their name as they knocked off San Diego State in overtime. Their two losses have come against Nebraska and NC State, both as expected.

QB Cody Clements has continued to show production for Southern Alabama, but continues to turn the ball over. Clements has 6 interceptions on the year which holds a poor ratio to just his 7 TDs. He’s thrown for 1131 yards, which is impressive for the QB.

Last time out, the Jaguars knocked off Troy to move to 1-0 in the conference as they rushed for 160 yards. Southern Alabama needed everyone of those yards as they held on for a 24-18 win.

Southern Alabama is averaging 374.8 yards of total offense on the season.

While both teams sit right around .500, they loss the games they were expected to lose in non conference play. This game holds plenty of value in terms of Sun Belt standings. Grabbing wins early in conference play is a must if either team hopes to continue to compete with the top tier teams in the conference.

Grabbing 6 points with the home team is the way to go here. The Jags have looked good running the ball and should have some success here Tuesday.