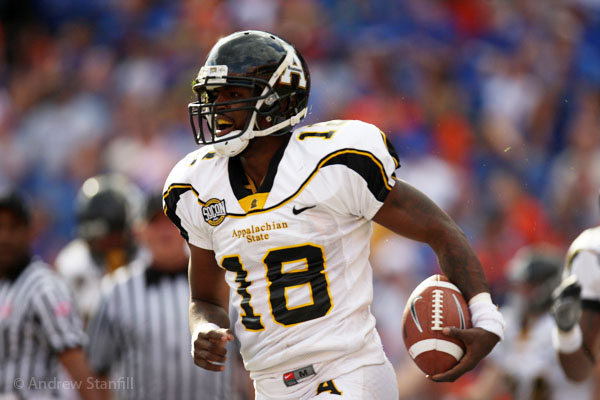 Southern Alabama is coming off two losses in a row, and coming into the game a little depleted with all the injuries that they have had to endure throughout the season.

Appalachian State is coming off a two game win streak and really playing well on offense as of late, scoring an average of 35 points in that span.

The Mountaineers have really been counting on their defense all year to win them games, as their offense has been a force as well. Taylor Lamb has passed for over 2100 yards this season and was named to the first team all conference group as well.

Putting him with the elite in the conference.

The Mountaineers will have to play their best this week if they want to stop the Southern Alabama offense, their record does not show just how good their team really is.

Watch for the Mountaineer defense to struggle a little bit in the early going but settle in and really take charge and get things done in the second half.

Southern Alabama is having a sub par year as they look to get bowl eligible this week getting their 6th win of the season, so you could say they have a chip on their shoulder really in trying to get to the post season.

Southern Alabama’s bright spot this season is Cody Clements who has really played well at the Quarterback position all year-long passing for 2177 yards along with rushing for 84 yards as well.

Southern Alabama has a balanced attack and can really come at you both ways, but this game they are facing a way too good of a defense with the Mountaineers coming into town this Saturday.

Even on the road I think the Mountaineers can really take this game and run away with a sub par Southern Alabama team.

Appalachian State is going to put up a lot of points so even on the road you should see them cover the spread against a really bad Jaguars team.