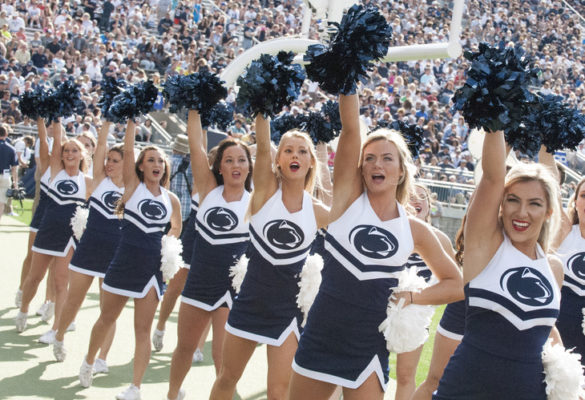 The Penn State Nittany Lions will play host to the always sturdy Appalachian State Mountaineers in the teams first ever meeting.

Penn State opened up as -28.5 point favorites, but the line has dropped in favor of Appalachian State as the line currently sits at -24 points with 68% of the public backing Penn State.

The total opened up at 57 and has since dropped to 54 total points.

Head coach Scott Satterfield has turned this Mountaineer program into the cream of the crop in the Sun Belt Conference claiming at least a share of the conference title the past two seasons.

In the last three seasons he’s been able to average 10 wins per season while leading the Mountaineers to a 30-9 record with each season ending with a bowl appearance.

There are question marks about new QB Zac Thomas, but with a run-first offense led by Jalin Moore and Marcus Williams (3,600 yards and 29 TDs combined), he should have an easier time adjusting, that is of course after this contest.

There will be some question marks along the front seven, but the secondary should be just fine led by CB Clifton Duck.

Head coach Rich Franklin has done wonders for this Nittany Lions club leading them to back-to-back 11 win seasons while they were in contention for a playoff spot.

They will be without their stud RB Saquon Barkley, but they will be returning one of the top quarterbacks in the country in Trace McSorley who owns a 57:18 TD to INT ratio in the past two seasons.

Add to it, Penn State will be returning four offensive linemen so although this offense will be without the production of Barkley, they shouldn’t have too many problems putting points on the board through the ground or through the air.

On the defensive side their strong defensive front will be led by Shareef Miller who wreaked havoc on quarterbacks last year posting five sacks, 11 TFL, and nine hits on the quarterback.

Their secondary will be a bit untested, but they will be getting back stud safety John Reid who missed last season due to an ACL injury.

Appalachian State puts up a fight, but not enough to take down Penn State.

Penn State is going to be a tough beat at home, especially for a non-power conference squad that will be working with a new quarterback under the helms.

Appalachian State doesn’t have the type of offensive power to keep up with Penn State, so they are going to have to heavily rely on their stud running backs to chew clock and Penn State’s offense off the field as much as possible.

This isn’t going to be some pushover game for Penn State as Appalachian State has quality talent on both sides of the ball, and although Penn State should handle their business at home, they do have a look ahead game with interstate rival Pittsburgh Panthers.

Majority of the public is backing Penn State, yet the line has dropped in favor of Appalachian State so their is some sharp money on the Mountaineers, and thats who I’ll be backing as well.

David is a newcomer to the Cappers Picks Blog but rest assured he is an analytical number-loving dual-threat sports junkie who has years of experience debating and analyzing the NFL, MLB, NBA, & NCAA. He studies the numbers and trusts his intuition to give the reader quality over quantity picks. Daily free picks always coming your way!