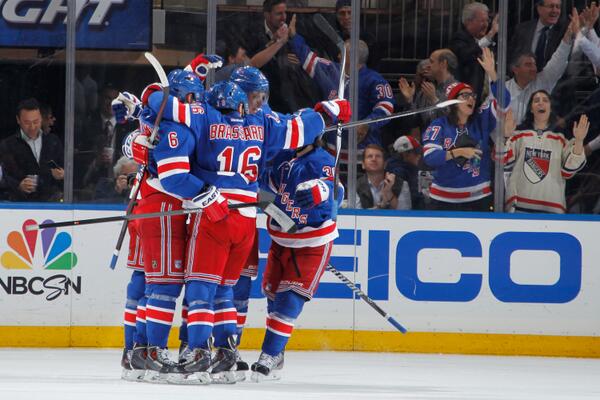 Pittsburgh set the tone in game 3 under a raucous crowd at MSG, while the Rangers were clumsy on the defence and showed little ambition on several PP opportunities. Game 4 goes Thursday with NY on the ropes.

No Fluery in game 3 even though rumours spun nearly all the way up to game time, no matter what the Pitt coaching staff say here, I don’t think we see him this series, especially with how well Zatkoff and Murray have been playing.

Crosby again showed why he is the heart of this talented team, and one of the best in the league Tuesday. He controlled the game nearly every time he was on the ice, making great offensive and defensive decisions and was rewarded by getting on the score sheet.

Kessel again looked flat and utterly useless on most shifts, but the slack is being picked up.

The defense did an absolutely amazing job of keeping the Rangers on the boards and limiting quality scoring opportunities.

I don’t see much changing in game 4.

The Rangers, in front of a sold out playoff crowd came out Tuesday and played like they all attended a bachelor party the night before. Game 3 should have been about 4-1 or 5-1 had it not been for the again steller play of Lundquist.

The Rangers mustered only 17 shots, 6 of them being deemed quality and lost any momentum gained in a big game 2 victory. They were beaten to pucks time and again and when they did have control, managed to give it away.

They have relied to heavily on their goalie and there is not much more he can do unless they expect him to start scoring some as well. New York needs to do everything opposite they did Tuesday if they hope to keep this a series.

It’s really hard to place a bet here Thursday considering we never know what caliber Rangers team is going to take the ice. Where the Penguins have been controlling and consistent, NY has been everything but.

There is no way the coaching staff didn’t have a field day during practices, critically pointing out every little mistake from game 3.

The Rangers are a talented enough team to pull things together enough to make game 4 count, I just don’t think they’re best is going to be enough.

Pittsburgh’s post season experience showed on Tuesday, they weren’t rattled with the home split, came out and dominated the Rangers in every which way.

We nailed the under in game 3 and were going to the over for game 4. Why? NY has to be motivated and we’ve seen way above average performances from the Pittsburgh goal-tending, something has to give.

In the same sense, if this game starts going offensive, like I think it will, Pittsburgh will crank up the pressure and keep up. Small time heroes in this one as the 2nd and 3rd liners get the goal scoring done.

Miguel DaSilva has been a solid choice on the ice all season.  Always looking for REAL value, you’ll never receive a -200 huge favorite as a pick. MD currently leads most sites he’s posted on as the #1 NHL Capper. 6-0 last premium plays on premium plays and 1-0 playoff free plays Check out his daily AWARD-WINNING sports handicapping selections and DAILY FREE Sports Picks right here at Cappers Picks.

If you’re looking for more picks like this NY Rangers vs. Pittsburgh Penguins matchup we’ll be providing 4* free NHL predictions on the blog all season long, and check out our Experts for guaranteed premium & free NHL Hockey picks!

Miguel DaSilva has been on our radar for sometime now. We've really been a fan of his WINNING NHL Picks. A newcomer to the Cappers Picks Blog, but not a newcomer to WINNING money for his clients. Part Of MD's Huge overall success is his ability to GRADE games. He believes this is KEY and only releases TOP PLAY games when he sees a great opportunity. Stay tuned to Miguel, he'll be picking FREE NHL games daily here on the blog.