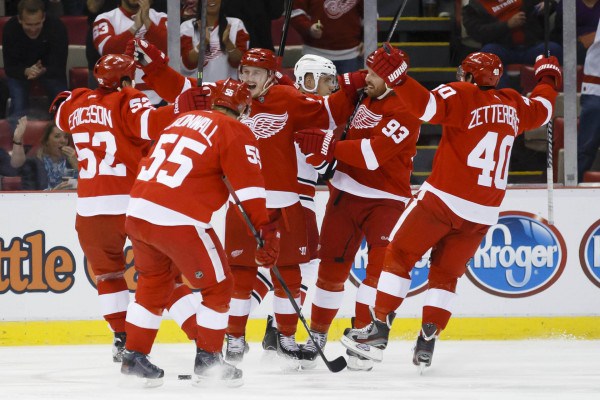 This is the only game worth watching on Wednesday night. The only potential playoff participants on the Wednesday schedule play in what is the biggest game for the two teams so far this season.

Detroit and Philadelphia are deadlocked at 91 points apiece and a loss this late in the season to a team you’re in direct competition with can be a death-blow.

The Flyers have been one of the hottest team in the NHL in the past month and have put themselves in control of their own destiny at this point.

Quite simply, if they win their remaining games they will be in the post-season. A stumble here or there and their playoff hopes vanish.

What’s got the Flyers here though? Well Steve Mason has been great in-goal and has provided a lot of stability and the Flyers are in most games late with a chance to win or at least salvage a point.

Mason was lit up by a Penguins team that is rolling everyone over lately, so a minor hiccup can be excused.

The offence hasn’t exactly been lighting up the scoreboard of late, but give this team credit, they can grind out wins and they’ve done so in one-goal victories five times in their last seven wins.

Jakub Voracek has had an off-year compared to his breakout season a year ago, but he’s starting to heat up late and Wayne Simmonds has been a scoring machine, setting a new career high in goals.

Another big role on the depth scoring has been Brayden Schenn who has chipped in for 25 goals and 56 points this year.

One of the most impressive streaks in all professional sports is at risk of ending this year, as the Red Wings have made the playoffs every season since 1990-91.

That’s an unprecedented 24 consecutive playoff appearances…For reference, the next longest active streak is the Pittsburgh Penguins, at 10.

Detroit will have to fight tooth and nail to get in as their remaining schedule features back to back games against the Flyers and Bruins, both of whom they are battling with for a playoff spot and they’ll wrap the season up with a tough road game against the Rangers.

It looks like Petr Mrazek will get the call for the huge tilt with the Flyers. The young Czech has been stellar for much of the season, but some recent stumbles sent him to the bench in favour of Jimmy Howard.

This is one of the biggest games of Mrazek’s career and could really put his stamp on the job as the Wings’ goalie of the future, effectively sending Howard packing.

The experience is all on the Wings’ side as the likes of Henrik Zetterberg, Pavel Datsyuk, and Niklas Kronwall have all been here done this many times, there’s no reason this group should not be motivated for this game.

This will be a tight checking, low scoring affair as both of these teams have a lot to lose. The first mistake will be so costly so look for this game to be cagey early on, without either team taking too many risks. Take the under for sure.

It’s just so hard to pick against the Wings, they just seem to always find a way.

If you’re looking for more picks like this Philadelphia Flyers vs. Detroit Red Wings matchup we’ll be providing 4* free NHL predictions on the blog all season long, and check out our Experts for guaranteed premium & free NHL Hockey picks!