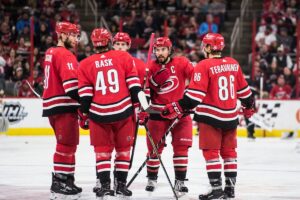 The New Jersey Devils and Carolina Hurricanes face off on Thursday in an NHL game at PNC Arena. When these two teams faced off on April 23fd it was the Hurricanes that won 3-2 in overtime.

The Devils sit with a 22-44-9 record overall and away from home they have gone 11-25-4. In the last game against the Ottawa Senators, the Devils scored four goals and that led to the one goal defeat.

Jesper Bratt has been the top player for the Devils scoring 25 goals and adding 46 assists for 71 total points. Nico Hischier has also scored 21 goals and added another 38 assists so far this year.

On the other side of this matchup is the Carolina Hurricanes who sit with a 55-20-8 record overall and at home this season they have gone 28-8-4. The Hurricanes have won five games in a row including the last game against the New York Rangers 4-3.

If you’re looking for more NHL picks like this New Jersey Devils vs. Carolina Hurricanes matchup, we’ll be providing 4* free NHL predictions on the blog during the entire 2021 NHL season, and check out our Experts for guaranteed premium & free NHL Hockey picks!