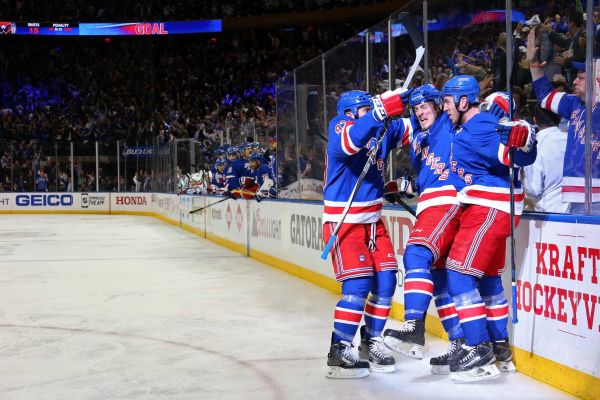 Two of the three best teams in the Eastern Conference square off in the Big Apple as the New York Rangers host the Florida Panthers with two huge points on the line.

The Panthers blew a golden opportunity to expand their lead in the Atlantic Division Saturday Night, but instead they blew a 3-1 lead at home and lost to the slumping Detroit Red Wings.

Florida remains three points ahead of the Bruins after their regulation loss to the L.A. Kings Saturday night, but the Tampa Bay Lightning are creeping up as well and trail the Panthers by just two points.

The Panthers are in for a tough test in this one as they travel to Madison Square Garden, a place where the hometown Rangers hardly ever lose.

Florida has struggled on the road as of late, dropping five of its last eight games away from home. Those three road wins also came against Winnipeg, Montreal and Toronto, so it isn’t like the Panthers are beating playoff-caliber teams right now.

The Rangers went 1-1-1 on their California road trip and are glad to be back home. New York is 23-8-3 inside Madison Square Garden this year, posting one of the best home records in the NHL.

The Rangers are currently 3rd in the Eastern Conference with 88 points, and a win against a quality opponent would help separate them from the rest of the crowd.

Seven of New York’s final 10 games will be played at Madison Square Garden, so the Rangers have an advantage as the regular season winds down. Lately, the Rangers have struggled against quality teams at home.

New York dropped its last two home games against the Islanders and Penguins respectively and gave up 11 combined goals in those contests.

It’ll be up to Mats Zuccarello and Derick Brassard, New York’s leading scorers, to get the job done against a Panthers defense that ranks 5th in goals allowed.

The Rangers have yet to lose three home games in a row this season.

And while the Panthers have played great defense this year, they’ve been really shaky against playoff-caliber teams.

New York is looking to get a much-needed home win after struggling on its recent California road trip and should get the job done against a Panthers squad that has really struggled against quality opponents.

Tough to bet against the Rangers at home, especially since they’ve yet to lose three in a row on their home ice.

If you’re looking for more picks like this Florida Panthers vs. NY Rangers matchup we’ll be providing 4* free NHL predictions on the blog all season long, and check out our Experts for guaranteed premium & free NHL Hockey picks!