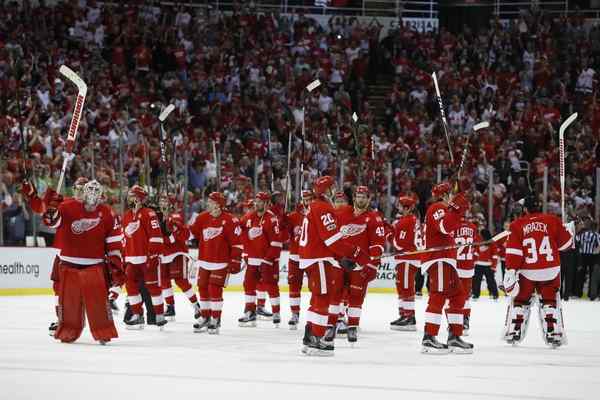 The Boston Bruins will be on the road Friday taking the ice against the Red Wings at Little Caesars Arena in Detroit.

The Bruins will be looking for their second win in three games following a 5-4 loss in Montreal against the Canadiens.

The Red Wings will be out to put an end to a four-game skid following a 5-1 loss in New York against the Rangers on Wednesday.

The Bruins will be looking to avoid back-to-back losses on Friday following a 5-4 loss against the Canadiens in Montreal. Boston was outshot 25-31 in the game but managed to win 36 of 60 faceoffs.

Boston was able to find the back of the net on one of their two power-play opportunities while defending the net both of the times they were forced to skate with a man in the box.

They had 11 blocked shots and nine takeaways in the game.

David Pastrnak leads the way for Boston with 30 points, 15 off of assists and 15 from goals.

The Detroit Red Wings are now 4-12-1 on the season following four consecutive losses, most recently 5-1 against the Rangers in New York.

Detroit was unable to score a goal on either of their two power-play opportunities and gave up a goal two of the three times they were forced to skate shorthanded.

They had 12 blocked shots and six takeaways in the game.

Detroit has only been able to find the winner’s column in one of their previous five games. Anthony Mantha leads the Wings with 15 points on the season with six assists and nine goals.

The Detroit Red Wings have owned the Boston Bruins in their previous three matchups, going 3-0-0 during the span.

Detroit has been able to put the puck in the net for an average of 4.33 goals per game while holding Boston to an average of just 2.33

The Red Wings have three power-play goals during the three games on nine attempts while the Bruins have scored just once on 11 opportunities.

What a difference a season can make. Sure, Detroit is 3-0-0 in their previous three games against the Bruins. This will be the first meeting between the two teams this season, though.

Not only are the Bruins scoring about a goal and a half more a game than the Red Wings, they are also much stronger on the defensive end of the ice, especially between the pipes.

Both of these teams are spending a ton of time in the penalty box every night. The only difference is that Boston has actually been able to be productive while skating a man down.

Detroit has given up three shorthanded goals to opponents this season. I think that number increases in Friday’s game. My money is on Boston.

If you’re looking for more NHL picks like this Boston Bruins vs. Detroit Red Wings matchup we’ll be providing 4* free NHL predictions on the blog during the entire 2019 NHL season, and check out our Experts for guaranteed premium & free NHL Hockey picks!