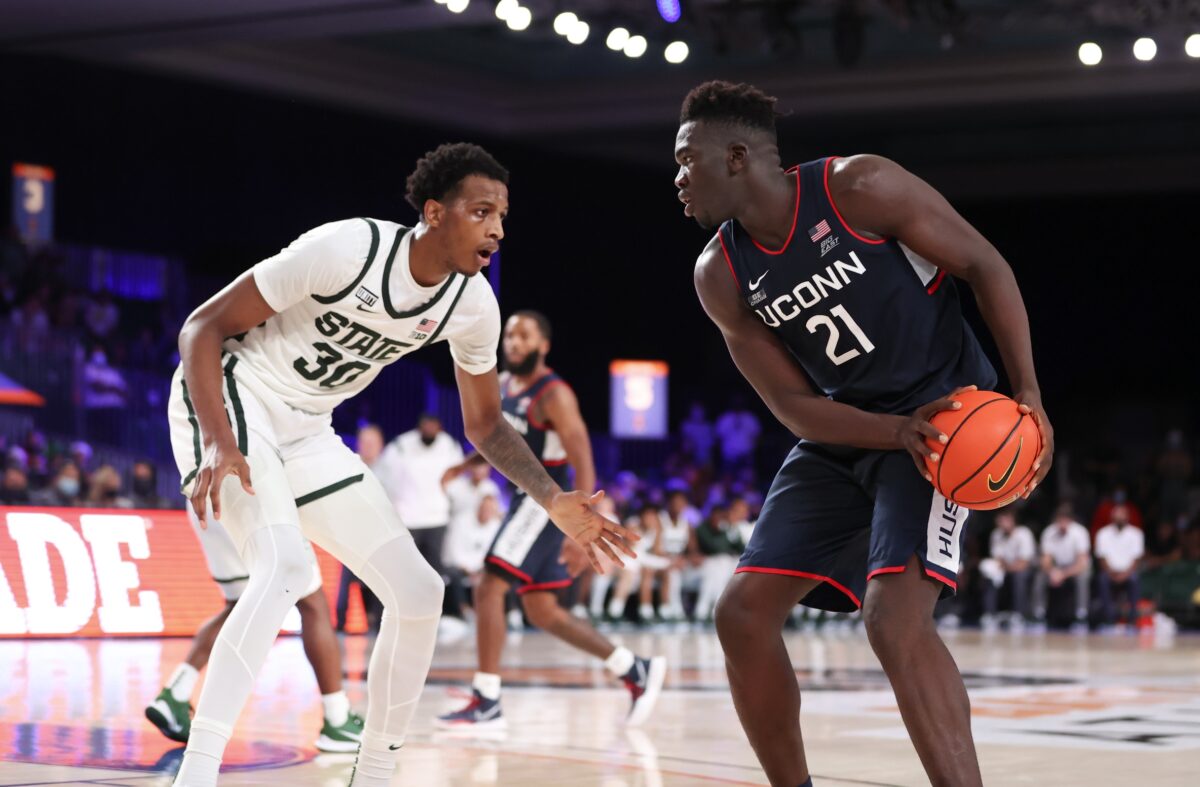 Tuesday Night college hoops features a top 25 Big Ten showdown between the Wisconsin Badgers and the Michigan State Spartans. Both teams have 3 conference losses and are just half a game behind Illinois for the top spot.

This will be the second meeting between these two teams. They last played on January 21st with the Spartans grabbing an impressive road victory, 86-74. Michigan State was a 3 point underdog coming into the contest.

In the Badger’s most recent game, they were able to win in a narrow two-point margin on the road against Penn State, 51-49. They were led by Steven Crowl, who had 13 points and 5 assists in 15 minutes.

Wisconsin is starting to play the best basketball of their season. After losing to Michigan State, the Badgers have started to play with a chip on their shoulder. On the offensive end, Wisconsin is averaging 71.2 PPG. According to KenPom, the Badgers have the 29th most efficient offense in the county. They slow the ball down and find their best shot. They are taking an average of 60.05 shots per game, which is the 91st most shots taken per game in the country.

On the defensive side of the ball, the Badgers have the 28th most efficient defense, according to KenPom. They can lock their opponents down and have been playing better defense the past two weeks.

Michigan State had a rough wake up call in their last game. The Spartans were throttled on the road against Rutgers 84-63. They held a slim 2 point deficit at the break but came out flat in the second half and were outscored 44-25. Gabe Brown led the way for the Spartans with 20 points and 5 rebounds.

According to KenPom, the Spartans have the 28th most efficient offense in the country. They are scoring an average of 73.7 PPG and are knocking down 46.38% of their shots from the floor. Michigan State loves to pull the trigger from deep as well as they are making 39.34% of their attempted three-pointers as a team.

On the defensive side of the ball, the Spartans are considered to be the 26th most efficient defense in the country, according to KenPom. They are allowing their opponents to score an average of 66.4 PPG, which is the 110th best on average. They will have to secure the ball and protect it so the Badgers don’t get any extra looks at the rim. The Spartans will force Wisconsin to take a lot of outside shots, as Michigan State is the 6th best team at sending shots back.

The Spartans are going to be able to bounce back after that tough loss to Rutgers last Saturday. They got their bad shooting night out of the way and it isn’t going to turn into a trend. These two teams are identical on the offensive side of the ball but the edge in this game will be found on the defensive side.

I love the fact that Michigan St. is at home and playing some solid defense this year. According to KenPom, they have the 26th most efficient defense in the nation which will be the difference maker in this contest. They were lit up by Rutgers and will now come out with a chip on their shoulder, ready to dominate the Badgers.

Give me the Spartans to bounce back at home and cover in this bigtime matchup.

If you’re looking for more College basketball picks like this Wisconsin Badgers vs. Michigan State Spartans matchup we’ll be providing 4* free college basketball predictions on the blog all season long, and check out our Experts for guaranteed premium & free NCAAB Hoops picks!