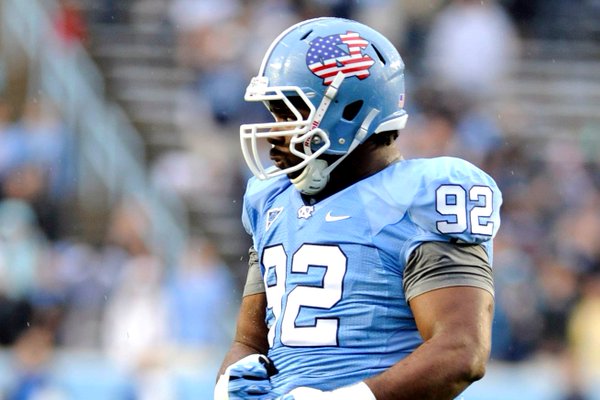 Looking for 2016 North Carolina Tar Heels predictions? The Tar Heels enjoyed an impressive 11-win campaign a year ago, and once again they look like one of the better ballclubs in the Atlantic Coast Conference. Carolina will probably be scrapping with the talented Miami Hurricanes to have the right to represent the ACC Coastal division in the conference title game.

North Carolina should have a strong offense this season, led by first-team all-ACC RB Elijah Hood.

His job is made easier thanks to a phenomenal offensive line; tackles Bentley Spain, Jon Heck, guard Caleb Peterson and center Lucas Crowley are all great players.

Defensively, the charge is led by a pair of excellent cornerbacks. Senior Desmond Lawrence and junior M.J. Stewart are both all-conference candidates and bring size and range to the position.

They had six interceptions between them in 2015. Elsewhere in the secondary, SS Donnie Miles led the team in tackles (128) and returns as a junior.

Otherwise, DE Mikey Bart had 6.5 sacks last year, Coach Larry Fedora and famed defensive co-ordinator Gene Chizik will hope he can push that up closer to the double-digit mark this campaign.

Senior Nick Weiler is a competent placekicker, who went 20-for-23 on his field goals a year ago.

In 2016, junior Mitch Trubisky will start under center for UNC.

He is expected to be half-decent, but he’ll have trouble replacing the numbers of the departed Marquise Williams, who had 3,000+ yards passing, nearly 1,000 yards rushing and 37 total TDs.

Trubisky will have to lean on Hood early to build his confidence.

The Heels have two new starters in the LB corps with juniors J.B. Copeland and Cayson Collins; they will have to step up to supplement sophomore returning starter Andre Smith, who was only OK as a freshman, who started by necessity last year.

The Tar Heels will be really good again this season.

It may be slightly tougher sledding for them this time around, as rival Miami is expected to be much improved.

Not to mention, there are some big dogs in the Atlantic division (Florida State and Clemson, we’re looking at you).

The Heels have two FCS opponents, which should be pushovers, but they draw Georgia in Atlanta for the opener, so that will be a tricky match-up.

Ultimately, North Carolina has strong talent and depth, and if Trubisky can even end up performing two-thirds as well as Williams did last year, the Heels will have a good shot at appearing in a second consecutive ACC title game, a clash where they gave #1-ranked Clemson a scare last year (45-37 loss), which displayed UNC’s potential.

Coach Fedora has done solid work with this football program.

What do you think about our 2016 North Carolina Tar Heels predictions? Please leave us a comment below telling us how you think they’ll do in 2016!