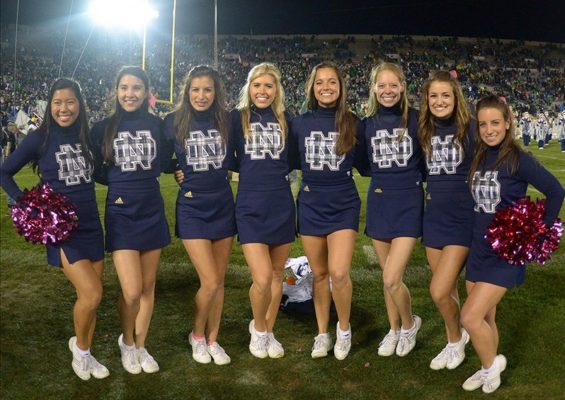 The New Mexico Lobos will be in South Bend, Indiana this Saturday to lineup against the Notre Dame Fighting Irish. Both of these teams were neutral last week and looking to improve their schedule to 2-0.

The Lobos came out on top against Sam Houston State while the Irish made pigeon stew out of the Cardinals in Louisville. I live about 90 minutes from Notre Dame Stadium and can already feel the excitement in my living room. It’s going to be a dandy of a ball game.

The New Mexico Lobos were able to hold on for a 31-39 win in their season opener against the Sam Houston State Bobcats. The Lobos went into the locker room up 22-16 at the half and the game stayed fairly close all the way through.

New Mexico was able to rack up a total of 485 yards in the game with 340 of them coming through the air. The Lobos were solid when they ran the ball, galloping for an average of 4.5 yards per carry.

The Lobos won the game, but their defense struggled to say the least. They allowed the Bobcats to accumulate 558 total yards, 443 of which were through the air. Sam Houston State was able to connect on 35 of their 60 passing attempts while picking up 3.3 yards per carry.

Ok ok. Here we go. Yes, many people, including myself, thought things would go a little differently than they did in the season opener against Louisville. The Irish went into halftime up 21-14. Notre Dame’s defense didn’t crush the Cardinals.

That being said, the Irish went on the road and beat an ACC team that is much better than they were a year ago. The offense had 423 total yards. They averaged over five yards a carry against a division 1 school.

Quarterback Ian Book completed 14 of 23 passes for 193 yards and a touchdown. He had 14 carries for 81 yards and another score. Yes, he put the ball on the ground. But after a slow start, he looked to gain momentum as the game went along.

Running back Tony Jones Jr. picked up 110 rushing yards and managed to cross the goal line once. Jahmir Smith only ran the ball for 24 yards, but he had two touchdowns. His job isn’t to pick up a ton of real estate. It’s to move the ball a couple yards when Notre Dame needs it most.

Safety Alohi Gilman led the defense with 10 tackles. Kurt Hinish, Daelin Hayes, Julian Okwara, and Drew White each had a sack. I look for the Irish to be much tougher at home when they see a few leprechauns running around.

Notre Dame isn’t exactly known for covering a large spread. They are 2-4 ATS in their previous six games. Covering 34.5 points takes a lot out of you, regardless of who you’re playing. Because Notre Dame was already had their week off, I think they’ll be comfortable winning by just a few touchdowns.

However, there will be some scoring going on in South Bend. No, the point isn’t for coach Kelly to embarrass who he takes the field against. The goal is to win the rest of his games by enough points to end up being in the top four come the end of the season. I like the over in this one. I’m taking the Irish.

If you’re looking for more picks like this New Mexico Lobos vs. Notre Dame Fighting Irish matchup we’ll be providing 4* free College football game predictions on the blog all season long, and check out our Experts for guaranteed premium & free CFB Football picks!