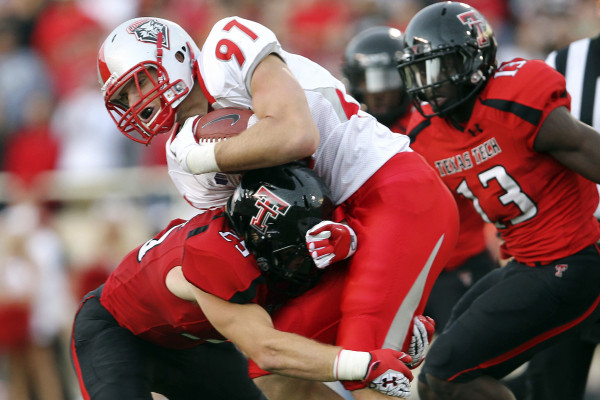 Looking for 2016 New Mexico Lobos predictions? After four years of the Bob Davie era, the New Mexico Lobos finally got over the hump and got to a bowl game. The pistol offense was still effective, but the defense was the key. The defense had been holding them back for the last few years, but it significantly improved and that propelled the Lobos to make it to a bowl game for the first time in about a decade.

It’s kind of odd to say that a strength of this Lobos team is the defense, but their defense is going to be a strength this year.

The Lobos bring back a core of nine starters who only allowed 366 points last year including only allowing 24 points versus Boise State and 13 points against Utah State.

366 points sounds like a lot, but if you compare that to 2014 where the Lobos allowed 431 points and 2013 where they allowed 513 points; only allowing 366 points is a massive improvement.

Their offense should still give defensive coordinators headaches as junior quarterback Lamar Jordan will, more a less, lead the team. Jordan will still give up the reins a bit to senior Austin Apodaca as the Lobos run a two QB system.

Senior halfback Teriyon Gipson will take more of the load and it wouldn’t be a surprise to see him run over 1,000 yards if he stays healthy.

Jordan and Apodaca aren’t exactly the best passers on the planet and the offensive line isn’t the strongest when they do drop back to pass.

The New Mexico Lobos have pretty manageable schedule with all things considered. They only play a total of five road games this year with one of them being their in-state rival New Mexico State.

Granted, two of the road games are long trips to New Jersey and Hawaii, but that’s only just two games. Plus, they get the Boise State Broncos at home, they get Air Force on a neutral site they avoid the San Diego State Aztecs this year.

I think it’s safe to say that New Mexico will win five games this season. I believe that is their floor. I’m chalking up the Lobos beating South Dakota, NMSU, L-M, Hawaii, and Wyoming.

The NMSU game is a little bold as that is a rival game on the road and you just never know, but I’m willing to think the Lobos win.

That means they just need to win one more game to make it back-to-back years where they make it to a bowl game.

The San Jose State Spartans game is very winnable at home, the Nevada Wolfpack game is at home and Colorado State is a winnable game on the road.

Overall, I do think the Lobos become bowl eligible and they win six games and I think they could potentially win seven or even eight games if you include the bowl game.

What do you think about our 2016 New Mexico Lobos predictions? Please leave us a comment below telling us how you  think they’ll do in 2016!