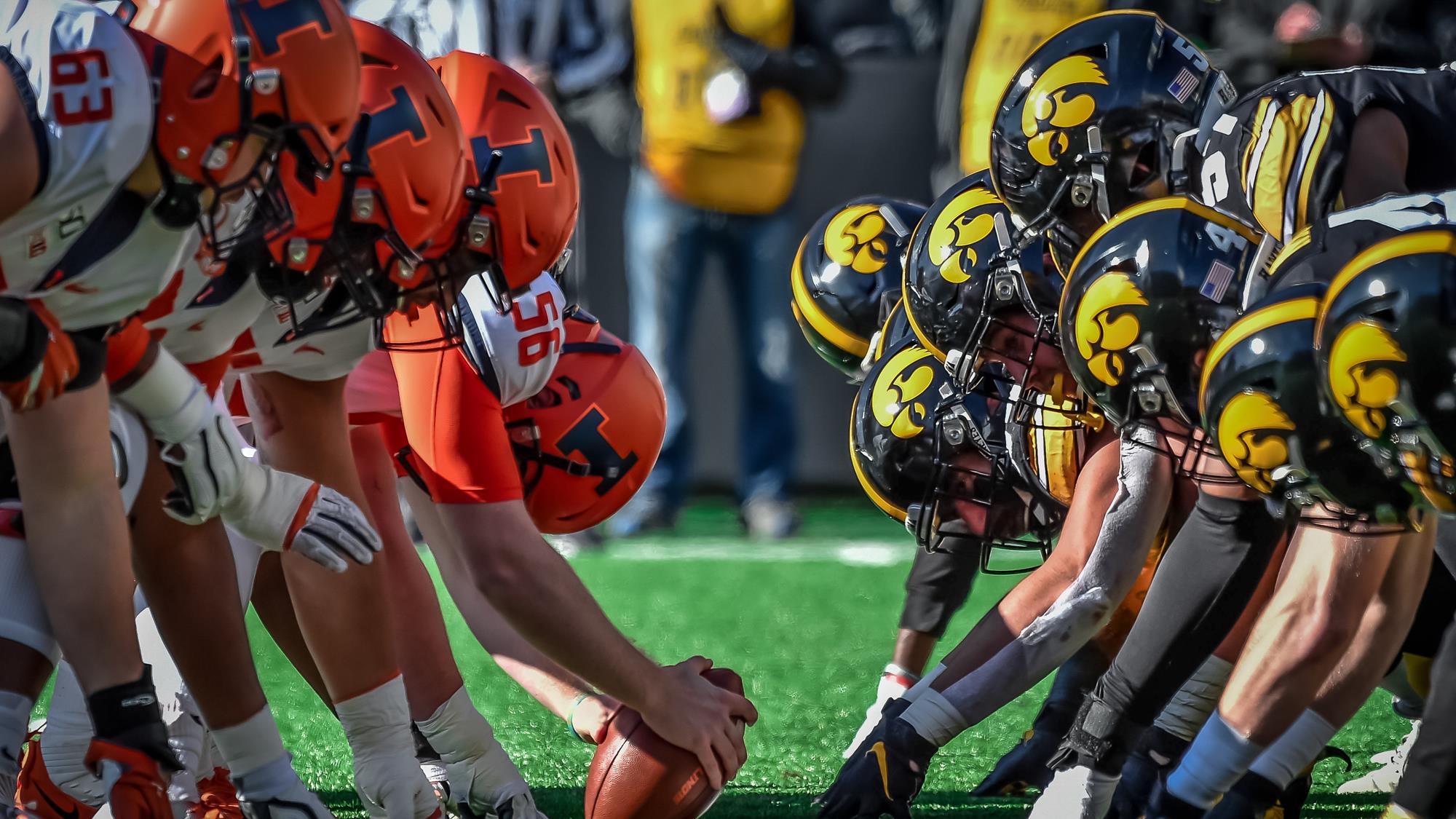 The Iowa Hawkeyes will travel to Champaign to take on the Illinois Fighting Illini from Memorial Stadium this Saturday on the Big Ten Network. Illinois will open as the three-point favorites here at home, with the total opening at 36.5.

HISTORY: The Iowa/Illinois football series dates back to 1899, with the Fighting Illini hold a narrow 38-37-2 lead, but Iowa has won eight straight matchups.

Iowa has kind of picked things up offensively over the past three weeks. After combining for 14 points in their first two games, the Hawkeyes scored 27 in back-to-back wins over Nevada and Rutgers. They hosted a conference power last weekend, and but their offense let them down again.

It’s year three starting for Spencer Petras, and there’s been minimal improvement. The fifth-year senior has longevity on his side, but how long will that be enough before Kirk Ferentz has to make a decision. Petras has thrown for 770 passing yards with two touchdowns to two interceptions through the first five games.

The run game remain a staple of what Iowa likes to do, but there’s been no push up front. Leshon Williams and Kaleb Johnson have split the work early. Johnson scored last weekend, and had a big game against Nevada (7/103/2). Williams scored against Iowa State and Rutgers, and leads the team in touches.

Sam LaPorta returned to give Petras a familiar target, and he’s been one of the few lone spots on this Iowa offense. LaPorta caught eight passes against the Cyclones, and he leads the team in receptions (21) and receiving yards (178).

Illinois took a 3-1 record into their bye week after enjoying a successful non-conference slate. They defeated Wyoming in Week 0, and despite dropping their first Big Ten game of the season to Indiana the following weekend, they’ve bounce back with non-conference victories over Virginia and Chattanooga, outscoring them 55-3. Bret Bielema’s team went out and performed well against his former squad, and hopped into the conference win column.

Tommy DeVito fell out of favor at Syracuse, but stayed true to his orange ties and has settled in nicely as Illinois starting quarterback. The fifth-year senior was flawless in the win over Chattanooga, throwing for 329 yards and three touchdowns, and he looks set to take on the fall weather that comes with Big Ten play, as it won’t be warm as the Carrier Dome, but a bit more scenic.

DeVito has passed for 1,121 yards with nine touchdowns to two interceptions through his first four games of the season. The veteran QB also chipped in three touchdown runs versus the Badgers.

Chase Brown has been the most reliable member of the program since the pandemic. After recording 1,005 yards in 2021, the junior back has surpassed the 100-yard mark in each of Illinois’ first five games. Brown has totaled rushed for a Big Ten-lead 733 yards and four touchdowns.

Isaiah Williams had a solid freshman season, and he’s found chemistry with DeVito early. Williams had a big game in the Big Ten opener versus Indiana, and he leads the team in catches (35) and receiving yards (291). Fellow sophomore Pat Bryant had a big game against the Mocs, pacing the team with six catches and 112 yards.

This puts Bret Bielema and Illinois in a spot to make a statement in the Big Ten and possibly become ranked for the first time since 2011. Iowa’s not in a good spot right now offensively, and despite a competitive showing in the Big House against Michigan, they remain pedestrian on that side of the ball.

Two of the best defenses in the nation will collide, and this one’s got Big Ten written all over it, and we like trusting the Illini right now. Illinois has been superior on both sides of the ball this season, and they looked great on the road versus Wisconsin last weekend.

Trust what Bret Bielema is building, and take Illinois’ spread this weekend.

If you’re looking for more picks like this Iowa Hawkeyes vs. Illinois Fighting Illini matchup we’ll be providing 4* free College football game predictions on the blog all season long, and check out our Experts for guaranteed premium & free CFB Football picks!